On 20 December 2017, the State Party submitted a state of conservation report, which is available at http://whc.unesco.org/en/list/940/documents/ and reports the following:

The approval and implementation of the PURP is highly welcomed, and the State Party should be commended for this achievement and for the fact that the World Heritage Management Authority is the main actor in its implementation. From the information provided by the State Party, it appears that the programme includes all relevant components, such as the updating of the Management Plan, the strengthening of the Management Authority, and the preparation of a Tourism Plan, as well as a Strategic Plan for the Waterfront. It would be recommended, however, that the Committee request the State Party to submit a copy of the programme documentation to the World Heritage Centre as well as periodic reports on its implementation, including information on the community’s participation.

As to the Waterfront, a Strategic Plan is urgently required in order to prevent constructions that could potentially have a negative impact on the Outstanding Universal Value (OUV) of the property. One key example is the Monument for Victims built without having undergone a technical review of the information on the project requested by the Committee, as well as the proposed Ice Cream Parlour for which ICOMOS issued a technical review in late 2017 with a negative conclusion. In this sense, it is recommended that the Committee reiterate that the Waterfront is a key attribute of the World Heritage property, and that any significant intervention could pose a potential threat to its OUV. The further developments in the Waterfront area should be closely monitored to prevent any negative impacts to the property’s OUV.

As such, it is recommended that the Committee urge the State Party to withdraw the licence granted to a private company for construction at the Waterfront, and to proceed urgently with the expansion of the World Heritage property boundaries to include a 50 metre strip of the river, and the extension of the buffer zones, as clearly expressed in previous Committee decisions.

The reconstruction of the previous National Assembly buildings was the subject of a technical review by ICOMOS in late 2017, which concluded that it is commendable to undertake such an endeavour, but that certain aspects of the reconstruction of the wooden front and side facades should be further studied, along with the visual impact of the complex on its wider setting. The World Heritage Centre and Advisory Bodies are in consultation with the State Party about the further development of this important project.

It is regrettable that two monumental buildings were illegally demolished by their owners in 2017, and that another two were partly destroyed by fire. It is recommended that the Committee request further information on the extent of these incidents, their relevance to the property’s OUV, and any corrective measures identified and implemented. Fire prevention and participation of private owners, as well as awareness-raising activities, should be strongly emphasized in the framework of the PURP programme. 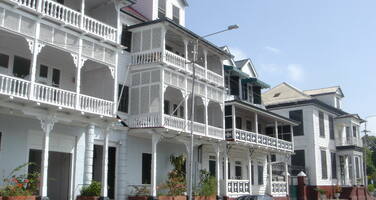