On 5 December 2017, the State Party submitted a state of conservation report, which is available at http://whc.unesco.org/en/list/1475/documents/, providing the following information:

The large and remote property is sparsely populated and subject to limited immediate pressures. While the local extinction of many mammal species illustrates that the human presence has resulted in significant ecological impacts, traditional regimes and social control are in place, contributing to the management of the fragile natural and cultural resources. However, there are indications that grazing pressure is increasing in some parts of the property and, if left unchecked, could quickly escalate. Climate change could aggravate concerns by reducing water availability. The documented cases of vandalism of some of the rock art in the property are also of serious concern, and reports on rehabilitation should be made available. Tourism is being actively promoted as a local development option; if successful, this could bring local economic benefits, but could also bring additional pressure. To be prepared for emerging threats, it is therefore important that the government commitment to the conservation of the area be translated into tangible management and conservation actions to complement traditional natural resource management practices.

Since the submission of the State Party report, the agreement between the Republic of Chad and APN was signed on 19 February 2018 (https://www.african-parks.org/press-release/chad-ennedi-protected). As part of this agreement, the European Union and the Dutch Postcode Lottery have committed 7.7M euros to manage and restore RNCE. This funding provides an unprecedented opportunity to consider all Committee requests and recommendations and translate longstanding political commitment into action. The announced strengthening of the legal protection status can at last become a reality. This process should carefully consider the boundaries of the inscribed property, which were modified during the course of the evaluation. The property, as currently inscribed, does not include the northern part of the massif, leaving out important rock art sites, including the emblematic site of Niola Doa, and potentially important areas for biodiversity. At the time of inscription, the Committee recommended an extension of the property, in particular to protect important rock art sites in the north and north-western part of the Ennedi Massif. The creation of the RNCE provides an opportunity to address this recommendation and it is recommended that the Committee urge the State Party to consult with the World Heritage Centre and the Advisory Bodies before finalizing the proposal for the boundaries of the RNCE so as to guarantee that all important areas are included and an appropriate buffer zone is foreseen. The map provided as part of the State Party report was of poor quality and does not allow a clear analysis.

The availability of funding and human resources through the RNCE partnership will also enable the overdue revision of the Management Plan, which should fully consider all previous Committee requests and recommendations in terms of zonation, preparedness for potential threats, local participation and respect for existing traditional knowledge and practices, as well as systematic and adequate documentation of the rock art sites. 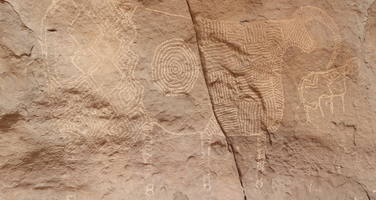