A joint World Heritage Centre/ICOMOS Reactive Monitoring mission visited all eight component sites of the serial property in Kazakhstan (Talgar, Kayalyk, Karamergen, Aktobe, Kulan, Kostobe, and Ornek sites and the Akyrtas archaeological complex) from 31 October to 9 November 2016. The mission report is available at https://whc.unesco.org/en/list/1442/documents. Subsequently, the State Party of Kazakhstan submitted a state of conservation report on 1 March 2017 (available at the link above) before the mission report had been received.

Although the 2016 Reactive Monitoring mission noted that a majority of the recommendations put forward by the March 2016 ICOMOS Advisory mission had not been implemented, the report submitted by Kazakhstan shows progress with a number of conservation issues addressed by the Committee at its previous session. The following summary brings together the outcomes of the mission and the information provided by the State Party.

The November 2016 Reactive Monitoring mission noted that the Committee requested the State Party of Kazakhstan to halt any further road construction, but construction did not stop until October 2016, allowing the archaeological site to suffer further damage. Furthermore, none of the recommendations of the 2016 ICOMOS Advisory mission concerning the road issues have been followed, which suggests that the management structures at the component site and their links and coordination with national agencies, the Ministries of Kazakhstan and other States Parties involved in the Silk Roads World Heritage property need to be greatly strengthened. Additionally, the five options for a bypass road put forward by the State Party in January 2017 would also have negative impacts on the component site.

The construction of the road and the associated bridge has inflicted serious damage on the historic structures and archaeological layers of the Talgar site and its overall morphology. The site has also suffered from reconstruction work and illegal, uncontrolled residential developments near its boundaries. All of this implies that the state of conservation of the site has deteriorated sharply since its inscription in 2014, despite the existing national legal protection for both the component site and its Buffer Zone. It is therefore recommended that the Committee express its deep concern that the damage has reached levels that put the site and the overall property under threat, and that it endorse the recommendations of the 2016 Reactive Monitoring mission and emphasize that new options should be developed for the Birlik-Almalyk-Kazstroy-Ryskulov-Ak-Bulak road beyond the territory of the component site and its Buffer Zone. Furthermore, the Committee may wish to request that reconstruction work and illegal residential development work be halted, that the bridge be dismantled, and that remedial measures be developed urgently to strengthen the overall legal, planning and management frameworks of the site and its setting.

Other Component Sites in Kazakhstan:

There is also deep concern that in all sites except Karamergen, threats arising from urban development (e.g. administrative and sporting centres, industrial utilities and waste landfill sites) impact adversely on the perception of the sites in relation to the Silk Roads and the beauty of their settings. In the case of Kulan, it is recommended that the Committee request the State Party of Kazakhstan to take immediate action to halt the implementation of the Master Plan of Kulan, any other development on private land, and to clarify land ownership status. It must be noted that no information on any of these road or development projects was submitted at the time of inscription in 2014, nor has any information been submitted to the World Heritage Centre for review by the Advisory Bodies since then.

The absence of Management Plans for all component sites and their landscape settings needs to be addressed urgently, as deadlines set by the Committee at the time of inscription and at subsequent sessions have not been met. Concomitantly, unclear boundaries, the absence of a comprehensive legal protection, inappropriate development and the construction of infrastructure projects, have put the sites under both ascertained and potential threat.

The majority of the recommendations put forward by the 2016 Advisory Mission have not been implemented, nor have the Committee’s requests from the 40th session relating to the protection and management of the property. Urgent reviews are now needed and, in the meantime, all work should be halted while the full extent of the existing damage is detailed and the full potential impacts of the projects are assessed.

Overall, it is recommended that the Committee further express its concern that most of these component sites in Kazakhstan have been impacted so adversely in a comparatively short space of time since inscription and that the state of conservation of these sites now represents a potential threat to the integrity of the overall serial transnational property.

Finally, it should be recalled that at the time of inscription, the great strength of the Silk Roads serial transnational property was the existence of an Intergovernmental Coordinating Committee (ICC), established prior to the nomination, in May 2009. For the Chang’an-Tianshan corridor, the formal agreement between all the participating States Parties (China, Kazakhstan and Kyrgyzstan) was signed in May 2012 and a more detailed agreement was signed in February 2014. This arrangement refined the management mechanisms and set out suggestions for exchange and collaboration on conservation, interpretation, presentation and publicity as a means of working towards coordinated approaches for all sites along the heritage corridor. International collaboration needs to be strongly supported by national collaboration, and thus the challenge to better protect and manage the serial transnational World Heritage property lies in the coordination at both national and transnational levels. It is therefore recommended that the Committee request the State Party of Kazakhstan to establish a World Heritage Steering Committee for the Silk Roads in Kazakhstan and develop effective coordination with China and Kyrgyzstan for the management of the overall serial property through the existing agreements and arrangement. 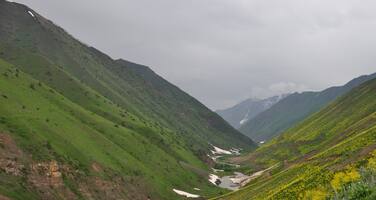