Concern over the situation prevailing in Diyarbakir

On 1 February 2017, the State Party submitted a state of conservation report, which is available at https://whc.unesco.org/en/list/1488/documents/ and addresses the recommendations made by the World Heritage Committee in its Decisions 39 COM 8B.32 and 40 COM 7B.60, and provided information on the state of conservation on Surici District as follows:

In the report, the State Party identifies several other current conservation issues, which may have an impact on the property’s Outstanding Universal Value (OUV), such as the amendment to the law regarding the repair of non-movable cultural properties under private ownership, and the urban design project for Cevatpaşa Neighbourhood Iç Kale Valley.

According to information received from third parties on the situation, the World Heritage property and its buffer zone have been exposed to widespread attacks and consequent security operations in the past two years. As such, it has been reported that the historic structures of the property, and in particular a number of historic buildings and monuments in the buffer zone suffered serious damages.

The security situation in Diyarbakir remains challenging for heritage preservation. Notwithstanding these difficulties, some progress has been made with small-scale conservation initiatives. The State Party’s initiatives in ensuring that the OUV of the property - including authenticity and integrity - is sustained, are to be noted.

It is recommended that the Committee request the State Party to continue to take all possible measures to safeguard the property to prevent further damage, and to submit a Master Plan for restoration and rehabilitation activities for all buildings within the property, which should include information and documentation on technics and materials. It is also recommended that the Committee request the State Party to carry out Heritage Impact Assessments (HIAs) for urban design projects such as “Urban Design Project for Cevatpaşa Neighborhood Iç Kale Valley”, which may threaten the OUV of the property, in conformity with the ICOMOS Guidelines on HIAs for World Heritage cultural properties.

It is further recommended that the Committee request the State Party to invite, when the situation allows, a joint World Heritage Centre/ICOMOS Reactive Monitoring mission to the property to evaluate the nature and extent of any threats and propose appropriate measures to be taken. 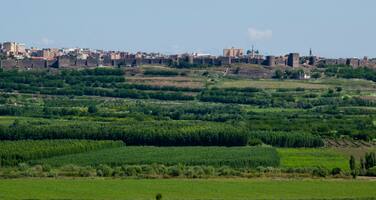