On 1 February 2017, the State Party submitted a state of conservation report for the property, which is available at https://whc.unesco.org/en/list/1035/documents, providing the following information:

The information provided by the State Party that discussions are still ongoing between the relevant national and state (regional) authorities concerning the proposed expansion of the Chapada dos Veadeiros National Park is noted, as is the renewed confirmation of the State Party that the OUV of the property continues to be well preserved. It is further noted that other protected areas, particularly the Pouso Alto EPA overlapping with the Chapada dos Veadeiros component, provide some legal protection to the property. However, the protection regime of the EPA appears to be significantly lower than the regime that would have been provided by a national park. While the process to expand the Chapada dos Veadeiros National Park has achieved significant progress with the development of a proposal for new boundaries and undertaken a thorough consultation process, it is regrettable that the expansion has not yet been agreed upon by all stakeholders involved, and that, therefore, no proposal for boundary modification of the property could yet be submitted, as was requested by the Committee at its 37th session in 2013 and reiterated at its 39th and 40th sessions in 2015 and 2016.

Indeed, while it is important to ensure that the expansion of the Chapada dos Veadeiros National Park has followed all necessary procedures and that all remaining land tenure issues have been resolved, it should be recalled that the World Heritage Committee, in its Decisions 39 COM 7B.27 and 40 COM 7B.71, urged the State Party to resolve the issue as a matter of priority and requested it to submit a proposal for a significant boundary modification of the property to reflect the new boundaries of the National Park by 1 February 2017, adding that without significant progress to address the lack of protection of parts of the property, it would consider its possible inscription on the List of World Heritage in Danger, in line with Paragraph 180 of the Operational Guidelines.

Given the fact that, despite the progress achieved by the State Party, the expansion of the Chapada dos Veadeiros National Park has not yet been approved and, therefore, significant areas  of the property continue to lack an adequate protection regime since 2003, it is recommended that the Committee inscribe the property on the List of World Heritage in Danger at this session, and that it request the State Party to develop a proposed set of corrective measures, a timeframe for their implementation and a Desired state of conservation for the removal of the property from the List of World Heritage in Danger (DSOCR), in consultation with the World Heritage Centre and IUCN. 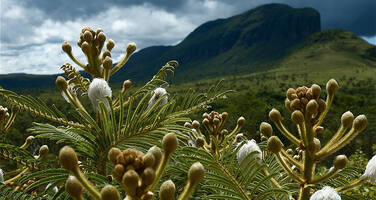