Threats identified at the time of inscription of the property in 2015:

On 30 November 2016, the State Party submitted a report on the state of conservation of this property, which is available at https://whc.unesco.org/en/list/1455/documents. This report provides information on the progress achieved with the implementation of the recommendations adopted by the Committee at the time of inscription of the property on the World Heritage List at its 39th session (Bonn, 2015), as follows:

The State Party has taken important initiatives to effectively address the Committee’s recommendations: the clarification of the ownership of land plots, the delimitation of the boundaries for known archaeological sites and negotiations with owners on the definition of buffer zones and related measures around specific archaeological sites are key steps for enforcing protection measures. The reorganization and maintenance of the storage rooms, and the cataloguing and conservation of the objects preserved therein, also represent important activities that contribute to improving knowledge of the property.

However, the report documenting the activities carried out since the inscription of the property also clarifies that enhancing protection implementation requires significant and lengthy preparatory work, which needs to be continued and supported through the steady allocation of human and financial resources.

It is noted that mechanisms are being considered to ensure that representatives of the municipality are involved in the Technical Committee and the Board of Trustees, to guarantee coordination with the municipality. A list of members has been provided, although since it only lists names and not roles; it would be helpful if members of the aforementioned bodies were identified by their institutional position rather than in a personal capacity. A high-level working group has also been established, including representatives from the HCAUD, the ICHHTO, the Department of Environment and the Ministry of Interior, to examine whether the proposed work plans respect the OUV of the property before they are submitted to HCAUD for approval. This represents an important step to achieve better coordination, yet it would be important that existing spatial plans be harmonized by integrating the OUV of the property and the related regulations, also with regard to the buffer zone and landscape zone.

Initial steps have been put in place to integrate risk preparedness considerations in the Susa Development Plan and the Management Framework of the property; these need to be further developed, paying particular attention to the property and its attributes, in order to reduce impacts from nature- or human-induced disasters.

Finally, it is noted that awareness-raising activities for the population and local stakeholders have begun and need to be continued to increase the local stakeholders’ understanding of the significance of the property and ensure their support to the Susa World Heritage Base. 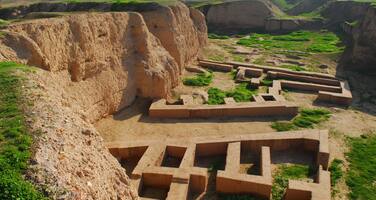