On 1 December 2016, the State Party submitted a progress report on the state of conservation of the property, as well as the completed Management Plan. Both documents are available at https://whc.unesco.org/en/list/829/documents/.  Progress in a number of conservation issues addressed by the Committee at its previous sessions is presented in this report as follows:

A request for a minor boundary modification, including a proposed change to the buffer zone, was resubmitted to the World Heritage Centre, in accordance with the recommendations of the Decision 38 COM 8B.51. It was considered incomplete by the Secretariat, who advised the State Party on a future submission.

The State Party’s efforts to address the conservation and management issues have led to substantial improvements of the property. Overall, the Management Plan has many excellent features and is an improvement on the previous draft seen by ICOMOS. However, there are still some major gaps in its content. In particular, the management of the property is not linked to the protection of Outstanding Universal Value (OUV) through use of the draft Statement of OUV or the identification of attributes. There is a lack of detail about the condition of the components and the Action Plan or programme of works need further improvement. The Management Plan also identifies some issues relating to the management structure for the property.

The creation of an independent Herculaneum Archaeological Park at first sight appears to weaken the overall management of this serial property, and clarification is needed on how effective coordinated management will be achieved. It would also be helpful to have more clarification on how coordination is achieved between the site managers and the Great Pompei Unit, which is responsible for what happens in the buffer zone and more widely. A clear statement on where responsibility lies for the implementation of the Management Plan is highly desirable.

While the prolongation of the GPP until 2019 and the extensive financial contributions are very much welcome, it is essential that beyond 2019 long-term resources, both human and financial, are identified and ensured to adequately deal with the continuing needs for conservation and visitor management at the property. The inclusion of the five threatened buildings within the GPP is noted, and it is hoped that consolidation and restoration works progress according to schedule. Justifiably, the structural stability of the buildings at the property receive priority treatment, however, it is recommended that the Committee encourage the State Party to develop a programme for long-term conservation and restoration of the decorative surfaces.

The State Party has resolved almost all legal issues and the necessary safeguarding, and restoration works at Schola Armaturarum have been commenced. It is recommended that the Committee also encourage the State Party to continue to resolve the remaining issue at Porta Nola, in order to complete the conservation of the major storage building.

Works to address the drainage issues in Regions III and IX have almost been completed. It is recommended that these works be carefully monitored and that the mitigation measures in the Regions I, III and IX, IV and V of the archaeological site be shared with the World Heritage Centre and the Advisory Bodies.

It is further recommended that the design for the service building at Villa A of Torre Annunziata be sent as soon as possible to the World Heritage Centre, for review by the Advisory Bodies. 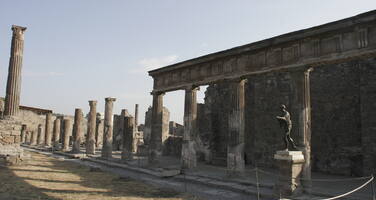