On 2 February 2016, the State Party submitted a report concerning the state of conservation of this property, which is available at the following address: https://whc.unesco.org/en/list/1447/documents/ and provides information on the progress achieved in implementing the recommendations adopted at the inscription of the property on the World Heritage List, as follows:

The commitment of the State Party to the conservation and management of the property should be noted; as well as the fact that many of the recommendations made by the Committee at the time of inscription in 2014 have been acted upon.

The management plan and the master plan were prepared together by the owners, the representatives of the Town of Höxter, the District of Höxter, the Landschaftsverband Westfalen-Lippe, Werkgemeinschaft Freiraum Landschaftsarchitekten and the Ministry for Building, Housing, Urban Development and Transport of the State of North Rhine-Westphalia. The plan accompanied the nomination dossier which was signed by the Minister of Culture of the State of North - Rhine Westphalia and by the the Foreign Secretary of the Federal Republic of Germany. However none of the other relevant stakeholders that prepared the management plan seemed to have signed it. Therefore it would be important to understand what mechanisms ensure that all stakeholders are committed to implement the management and the master plans according to their capacities and responsibilities.

It should also be noted that the State Party has successfully made progress with regards to the Management Plan, Operational Master plan and provisional budget. Although, the State Party has made national funds of 4 million euros available to the City of Höxter for the implementation of measures of the Management Plan of the property, these measures have not yet been realized as the funds have not been forwarded to the owner.

In addition, the planned comprehensive conditions assessment and monitoring of Westwork have been implemented. In 2014 and 2015, the State Party has conducted a continuous monitoring, including documentation and implementation of necessary restoration measures. The State Party has also successfully developed a Risk Management Plan for the museum buildings. The Flood Emergency Plans have been submitted to the World Heritage Centre in 2014 and a plan is already in place concerning the railway lines.

It should be further noted that, even though this is being considered, new forms of presentation of the property Carolingian and medieval history still lacks funding. The project for a walk in media-enhanced spatial theatre with installation of video projections has been launched but is yet to be implemented. The project lacks the necessary funding; nonetheless it is currently being reviewed by the relevant authorities.

Another conservation issue is the wind farm repowering project. This project in Bosseborn was cancelled because of the expected negative visual impacts for the property. For the wind farm project in Fürstenau, negotiations are still ongoing to avoid significant visual effects. Unfortunately, the wind farm project in Beverungen has been authorized despite concerns of the authority regarding the visual impact on the property. It should be requested the State Party to undertake Heritage Impact Assessments (HIAs) in conformity with the ICOMOS Guidelines on Heritage Impact Assessments for Cultural World Heritage Properties, with a specific section focusing on the potential impact of the project on the Outstanding Universal Value (OUV) for the wind farm projects in both Fürstenau and Beverungen, in order to prevent any irreversible transformations and potential threats to the property’s OUV.

In light of the progress made by the State Party, it is considered that some of the concerns of the World Heritage Committee are currently being addressed. It is however recommended that the World Heritage Committee encourage the State Party to continue with the implementation of all relevant measures and plans, including the establishment of the Steering Committee, which is envisaged by the management Plan, for coordination purposes and in order to prevent any threats to the OUV of the property. 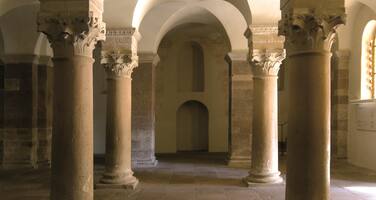