State of Conservation Temple and Cemetery of ... 2016
Print

On 27 November 2015, the State Party submitted a state of conservation report, a summary of which is available at https://whc.unesco.org/en/list/704/documents/. Progress on a number of conservation issues addressed by the Committee at its previous sessions is presented in this report, as follows:

In addition, the ICOMOS Reactive Monitoring mission that visited the property from 9-12 December 2014 observed, inter alia, the lack of a specific management plan for the property and its buffer zone that is focused on the protection of OUV and its attributes. The mission also noted an opportunity to create an overall plan for the pond area that optimizes its links to the World Heritage property and sheds light on development around the pond. The State Party maintains that there is “no connectivity between the Ancient Panchi Pond and the historical buildings and the World Heritage property.”

As requested by the Committee, the State Party has provided information about the full scope of the Ancient Panchi Pond area project, including the Detailed Planning and Building Scheme for Construction Project of the Ancient Panchi Pond in the Buffer Zone of the World Heritage in Qufu (July 2015), the Conservation Planning for Temple and Cemetery of Confucius and the Kong Family Mansion in Qufu document, and a HIA (August 2015). These documents will help significantly in ensuring that the attributes that support the OUV of the property, including its authenticity and integrity, are appropriately protected and managed.

The State Party expresses its regret that the correct procedures for this project (planning for which began in early 2009) were not properly followed with regard to Paragraph 172 of the Operational Guidelines, and indicates that it has put in place measures to avoid any future misunderstandings about the process. It is imperative that the State Party continues to fully inform the Committee about all future projects that may potentially affect the OUV of this property, including its authenticity or integrity, before making any decisions that would be difficult to reverse.

Concerning the few historical buildings that remain within the area in question, the HIA’s recommendation to follow the principles of “minimum intervention” and “in-situ conservation” is appropriate. As for the proposed new construction, according to the Detailed Planning and Building Scheme for this area, as revised in July 2015, the new buildings will largely imitate local residences of the Ming and Qing dynasties, their volume and height will not exceed that of Dacheng Hall in the Cemetery of Confucius, and the streets and lanes will remain as in the original layout. It is recommended that the State Party pay particular attention to the objective of making the features and styles of the newly constructed area compatible with that of the Temple of Confucius, the Cemetery of Confucius and the Kong Family Mansion. In particular, the stated intent to largely imitate local residences of the Ming and Qing dynasties should be carefully assessed in order to avoid the potential of falsifying history. It is recommended that the Committee urge the State Party to carry out HIAs, with a specific section focusing on the potential impact of the project on the OUV, as a part of all future plans for major restorations or new construction projects. 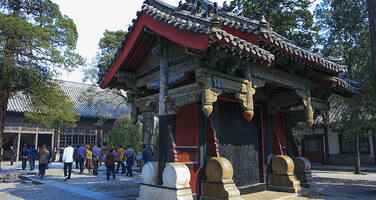