State of Conservation Minaret and ... 2016
Print

On 23 February 2016, the State Party submitted a state of conservation report, which is available at https://whc.unesco.org/en/list/211/documents. However, the document details a series of the activities that need to be carried out rather than providing an update on work that has been undertaken, and is identical to the one submitted in 2015.

The report indicates that the Afghan Government has identified a range of mitigation measures, including a monitoring system for the Minaret, through regular topographic measurements; capacity building programmes for national experts; topographic and archaeological surveys to redefine core and buffer zones; a damage assessment report; the protection of the site against illicit excavations; consolidation of the minaret structure; and emergency restoration of the surface decoration of the Minaret. The report further states that the South bank of the Hari Rud River should be consolidated through the extension of gabions and the planting of trees upstream of the Minaret.

The report also emphasizes the need to repair the guest houses and the importance of constructing a foot bridge over the Hari Rud, to enable year-round access for inhabitants of nearby villages and for conservation work.

It is deeply regrettable that the State Party has submitted almost identical state of conservation reports for several consecutive years, summarizing only the works which are required.

The need for construction of a footbridge over the Hari Rud River and the repair of the guest house, which was donated by UNESCO in 2003, was already noted in previous state of conservation. It is of concern that the State Party has to date not made any progress with the construction of the footbridge and not repaired the guest house, nor has the State Party provided any justification for the delay or problems encountered. Furthermore, the report provided no information on how the security of the site is being maintained and monitored.

Regarding the need for accurate mapping of the archaeological remains and for the definition of appropriate boundaries and buffer zones for the property, the World Heritage Centre and the Advisory Bodies would like to draw the attention of the Afghan Government to the detailed topography produced in 2012 as part of the UNESCO/Italy Funds-in-Trust project for Jam and Herat. The comprehensive topography provided detailed boundaries for both the property and the buffer zone, which were elaborated taking into account surrounding archaeological remains. The adoption of the topographic map, as well as new boundaries proposed, by the relevant authorities would constitute an essential step towards developing and implementing an effective conservation strategy for the property. This strategy should include the important ancient settlement, the precise extent and remains of which have yet to be defined. Therefore, it is regrettable that the State Party has not yet proceeded with the adoption of this detailed topography for Jam.

It is noted that a Conservation Action Plan is being elaborated by the UNESCO Office in Kabul, in co-operation with the State Party and the World Heritage Centre, following the approval, in March 2015, of an Emergency International Assistance Request (IAR) under the World Heritage Fund (USD 73,750). It is strongly hoped that, on the basis of the Conservation Action Plan elaborated under the IAR, the State Party will (i) establish a concrete work plan for emergency conservation work as well as a regular monitoring system, (ii) have them approved and an appropriate budget allocated; and (iii) start implementing these actions as soon as possible.

Upon the approval by the Government of the budget necessary to carry out such a work plan, the State Party shall be able to propose a revised timeframe for the implementation of the corrective measures identified by the World Heritage Committee at its 31st session (Christchurch, 2007), so as to achieve the Desired state of conservation for removal of the property from the List of World Heritage in Danger (DSOCR). 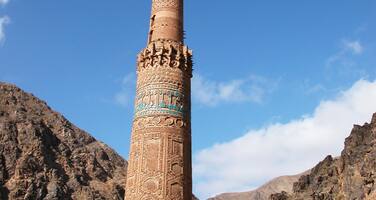