In December 2014, Mikisew Cree First Nation, an indigenous community of the property, sent a petition to the World Heritage Centre (available online http://cpawsnwt.org/news/mikisew-first-nations-petitions-unesco-to-list-wood-buffalo-np-as-world-her), requesting to inscribe the property on the List of World Heritage in Danger for the following reasons:

In response to the World Heritage Centre’s letter of 11 December 2014 requesting comments on the above, the State Party reported on 13 March 2015 (available online at https://whc.unesco.org/en/list/256/documents/) that:

Furthermore, the State Party reports that the Minister of Environment of Canada corresponded with the Chief of the Mikisew Cree First Nation regarding the issues raised in the petition, which has led to three key commitments by the federal government:

It is noted that Site C Hydroelectric Dam on the Peace River, which will be located outside the property, was approved by the government of British Columbia in December 2014, and that the construction work is expected to start in summer 2015. However, the Mikisew have reported that First Nations have expressed significant concern about its impacts on their hunting, fishing and agricultural areas. The IUCN World Heritage Outlook 2014 identified the existing dams to have significantly altered the hydrological regime of PAD and hence, any further activities should be evaluated prior to commencement of constructions, including an assessment of potential (cumulative) impacts on Outstanding Universal Value (OUV).

A Joint Alberta-Canada Implementation Plan for Oil Sands Monitoring (JOSM) was created to support decision-making by governments and stakeholders; however the Mikisew have reported that all indigenous groups in the region have withdrawn from JOSM, due to concerns about the engagement process, limited incorporation of traditional ecological knowledge, and lack of transparency. Furthermore, Alberta’s Auditor General’s 2014 report concluded that further work is required to understand cumulative environmental impacts for oil sands development.

It is recommended that the Committee urge the State Party to review the cumulative impacts of all of the hydroelectric dam projects, oil sands development and open pit mining on the property’s OUV, taking the effect of climate change into full consideration, and to complete a Strategic Environmental Assessment (SEA), in line with IUCN’s World Heritage Advice Note on Environmental Assessment. Furthermore, in accordance with Paragraph 172 of the Operational Guidelines, it is recommended that the Committee request the State Party not to take any decision related to any of the development projects that would be difficult to reverse, and to submit the SEA to the World Heritage Centre for review by IUCN.

It is finally recommended that the Committee request the State Party to invite a joint World Heritage Centre/IUCN Reactive Monitoring mission to the property to review the impact of the developments on the property, evaluate its state of conservation and exchange in more depth with the State Party, petitioning First Nation, and other stakeholders as appropriate. 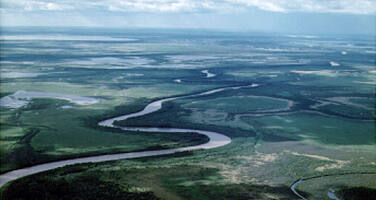