On 20 March 2015, a report on the state of conservation was submitted by the State Party. This report is available at: https://whc.unesco.org/en/list/444/documents/.

At the end of 2014, the property was damaged by the floods that hit parts of southern and south-eastern Morocco. A commission comprising agencies responsible for conservation visited the scene and prepared a report on damage assessment, noting that three houses and parts of the passages leading to the fortress had collapsed. The work of reconstruction and consolidation will be implemented as part of the restoration project of the houses of the Ksar, which will be carried out by the Centre for the Conservation and Rehabilitation of the Architectural Heritage of Atlas and Sub-Atlas Regions, (CERKAS), and which has prepared a list of special requirements for this restoration work. However, the report indicates that the project has been delayed due to administrative and financial problems, without elaborating.

The report indicates that a new management plan for the 2016-2021 period must be prepared in 2015 and will be a continuation of that which was adopted in 2006 for 2007-2012. The Management Committee continues to meet regularly to review and decide on activities to be undertaken in accordance with the management plan. At each meeting, CERKAS presents a report on the state of conservation, progress of the projects, and problems encountered. On the site, a Committee to oversee and control infractions at the construction site makes two visits per month and provides regular monitoring of the evolution of the site. The role of inhabitants in the implementation of actions is also essential. The Special Account for the conservation of the property, created in 2008, should improve the collection and redistribution of income generated by the site in favour of its conservation, but also for the benefit of the people who make it a living site.

The new Management Plan will primarily aim to continue the partnership policy implemented with all stakeholders and which has given satisfactory results, as well as the reconcilation between conservation and development. The key features of this new plan will focus on conservation by restoring the entire Ksar with the creation of income generating activities. The construction of a new bridge facilitates access to the Ksar. However, it seems that the lack of a budget calls into question the drafting and implementation of this plan.

The damage caused by the 2014 floods seems to be limited, well-documented and properly assessed. The work of reconstruction and consolidation will be supervised by CERKAS, which would seem to guarantee a quality of execution according to current norms. However, it would be useful for the State Party to provide more information about the delay in the completion of this reconstruction and consolidation work foreseen in the restoration project for the houses of the Ksar.

The report confirms that real changes were noted on the site after the implementation of the 2007-2012 Management Plan. However, the positive dynamic created was not directly pursued, and the 2016-2021 Management Plan remains in draft form.  It would be useful to know the status of the preparation of this plan, the completion of which seems to be scheduled for 2015.  Likewise, it would be useful to know whether the special financial account is operational or not, as the information provided in the report was not sufficiently explicit on these points.

Regarding the bridge connecting the two banks of the Wadi el-Maleh, the report submitted by the State Party does not provide more information than that contained in the previous report. It would therefore be desirable that this be the subject of an impact study on the property, to be submitted to the World Heritage Centre.

Finally, the report does not indicate whether or not the State Party has decided to follow the recommendation of the World Heritage Committee to adopt the approach centered on the historic urban landscape as an additional tool for sustainable management of the property. 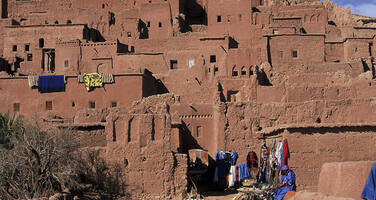