On 26 January 2015, the State Party submitted a state of conservation report for the property, which addressed the requests of the Committee.  A joint ICOMOS/ICCROM Reactive Monitoring mission also visited the property from 27 to 29 January 2015. Both reports are available at https://whc.unesco.org/en/list/1215/documents.

The State Party has put National Planning Practice Guidance into effect with specific reference to the management of World Heritage Sites and the consideration of development proposals that may impact the Outstanding Universal Value (OUV) and the property’s setting. In addition, English Heritage has drafted good practice guidance which provides advice on the protection of properties in their setting. Local authorities have also developed policies for protection of OUV including guidance on developing Heritage Impact Assessments (HIA).

The State Party acknowledges that the supermarket development at Hayle Harbour has had an adverse impact on the property’s OUV. Nevertheless, the State Party points out that the development is smaller than the originally proposed one, and that there are ‘offsetting’ benefits including the repair of the sluicing infrastructure, which allows for the continued use of the harbor The State Party reports that lessons have been learned at both local and national level from the issues arisen from the development of the supermarket in Hayle, which will be applied in future. Both the adverse impact of the development and the lessons learnt were discussed by all relevant parties during the January 2015 mission.

The State Party has discussed the recommendations of the 2013 mission for the proposed mining at South Crofty with the developer who is willing to consider changes, as long as they do not result in extensive redesign causing a new planning application. The 2015 mission was informed that the plans to resume mining have been halted due to financial constraints, with the mining company in administration. The mission was informed, however, that the mining company was still actively pursuing investors. The State Party through the Cornwall Council are maintaining a “watching brief” on the site and will intervene with the mining company should the proposal be reconsidered before planning permission lapses in November 2016.

A number of the property’s components have been repaired which suffered significant storm damage over the Christmas to New Year period in 2014, including repairs at Portreath Harbour, Calstock, Morwellham and New Quay.

The 2015 mission has reported that the supermarket development has had a negative impact on the OUV of the property. While it could have been possible to design and construct a heritage-led development (supermarket or other use) on the quay, the resulting large box construction and parking lot are inappropriate for the context and make it difficult to understand the quay as part of the cultural landscape of Hayle Harbour. The extent of the impact of what has already been constructed could warrant an inscription on the List of World Heritage in Danger, in and of itself, but joined with the fact that more development is still planned and represents an ongoing potential danger to the World Heritage property.

It is noted that the State Party and the local authorities have recognized the negative impacts on OUV of the completed supermarket, and have pledged to take steps to ensure that future developments do not have a similar negative impact. This can only be considered as a promising step, which now needs to be followed up by actions to put into place the necessary personnel, administrative structures, planning tools, and guidance documents to ensure better future outcomes.

The 2015 mission recommends that the State Party immediately halts the implementation of the consented development on the remainder of the South Quay and re-enter into negotiations with the developer to make the necessary changes to the proposal to bring it more in line with the historic character of the site and limit any further adverse effects to the OUV. If the development continues as currently foreseen on the South Quay, it would be recommended that the Committee consider the inscription of the property on the List of World Heritage in Danger at its 41st session in 2017 based on the recommendations of the 2015 mission. In addition, an inscription on the List of World Heritage in Danger should be considered if the improvements to the planning tools are not implemented by the State Party in order to ensure that there are no adverse impacts on the property’s OUV. The mission report notes that no further proposals for the development for the North Quay, mentioned at the time of the 2013 mission, were presented to the mission.

In regard to the South Crofty mine, it is recommended that the Committee request the State Party to continue to follow up closely and ensure that if the proposal to restart mining progresses, there is sufficient time to allow for the necessary dialogue and negotiation to ensure that the recommendations for the 2013 mission are followed. In addition, an update of the archaeological reports should be undertaken to inform any future development.

The current development proposals at Hayle Harbour, South Crofty and Tavistock, and any future substantial developments there and elsewhere are required to be evaluated by the Advisory Bodies in an adequate and profound manner to mitigate any further adverse impacts on the property and its OUV. It is recommended that the Committee request the State Party to submit plans for these and any future projects, based on HIAs, carried out in conformity with ICOMOS Guidelines on HIAs for World Heritage cultural properties, for review by the World Heritage Centre and the Advisory Bodies prior to the approval of any construction and development.


REVISED DECISION SUBMITTED ON 28/06/2015 BY THE WORLD HERITAGE CENTRE, ICOMOS AND ICCROM 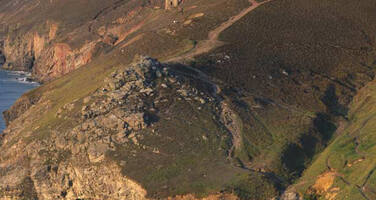