Threats identified at the time of inscription in 2014:

Proposed for adoption in the draft Decision below

On 25 February 2015, the State Party submitted a state of conservation report, which is available at https://whc.unesco.org/en/list/1492/documents. This responded to the request of the World Heritage Committee at the time of inscription, as follows:

The decision by the Israeli High Court not to build the “Wall” is to be welcomed, as removing a major threat to the property. It is noted that this decision has not necessarily finally closed the issue but any new proposals would need to re-start the processes of consultation and approval within the Israeli administration.

As noted by the State Party, changes that have the potential to undermine the traditional social and cultural processes are accelerating and continuing to impact adversely on the functionality and integrity of the cultural landscape.

The reversal of these negative changes will only be achieved through sustained interventions at a local level, through an active management plan, and with the full engagement of local communities, and local and national authorities. The development of a Management and Conservation Plan and a strong management system is urgently needed as is adequate protection. The Plan needs to set out specific projects to deliver the necessary corrective measures.

It is recommended that the Committee adopt the DSOCR, developed by the World Heritage Centre and the Advisory Bodies in agreement with the State Party, as proposed in the draft Decision below.

Statements of Outstanding Universal Value of 12 properties inscribed at the 38th session (Doha, 2014) and not adopted by the World Heritage Committee

b) Timeframe for implementation of the corrective measures:

10. Decides to retain Palestine: Land of Olives and Vines – Cultural Landscape of Southern Jerusalem, Battir (Palestine) on the List of World Heritage in Danger. 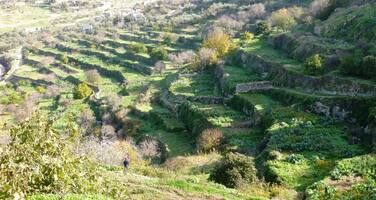