The Bureau was informed by the Secretariat, ICOMOS and ICCROM of reports that major refacing and rebuilding of historic monuments and replacement of traditional architectural elements with inappropriate modern materials are being carried out at both Bukhara and Itchan Kala, as well as in Samarkand. These works, some irreversible, had been conducted in preparation for the 2500th Jubilee celebrations and have altered the appearance of the two World Heritage sites and Samarkand, which is on the Tentative List.

ICCROM also expressed concern over the demolition of traditional vernacular houses in some areas to create large squares surrounding the monuments, thereby impairing the integrity of the historic area.

The Bureau was informed that ICOMOS had been requested by the Secretariat to carry out a reactive assessment mission and that this would take place in early 1998.

Therefore, the Bureau decided to consider the findings of the ICOMOS mission at its twenty-second session in June/July 1998, and take appropriate action thereupon.

In 1995, one of the four minarets collapsed and resulted in destabilizing the entire structure of Chor Minar, Bhukara. Emergency assistance under the World Heritage Fund was provided to undertake urgent conservation measures.

The Secretariat has received reports that major refacing and rebuilding of historic monuments and replacement of traditional architectural elements with inappropriate modern materials are being carried out at both Bukhara and Itchan Kala. These works, some irreversible, are being conducted for the 2500th Jubilee celebrations. They are altering the appearance of the two sites and are affecting the value of the properties.

The Secretariat and ICOMOS will report on the reactive assessment mission to Bukhara and Itchan Kala during the session.

The Bureau may wish to examine information that will be provided at the time of its session and take appropriate action thereupon. 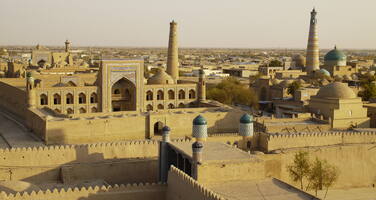