Factors affecting the property in 1996*

International Assistance: requests for the property until 1996

Missions to the property until 1996**

UNESCO organized a mission of two experts to the site, from 24 November to 4 December 1995.

This mission noted the disturbances and water infiltration in the underground passages, which could be remedied by efficient maintenance of the site, and especially called attention to a serious alteration in the inner north-east angle of the Temple of Bacchus where the combined effects of water infiltration and frost have eroded the sculpted decoration, causing the stone to crack and weakening the inner wall of the construction to the point of possible collapse, with the consequent danger for tourists.

Furthermore, if the electrical transformer project appears to have been abandoned, a rectilinear road project, passing near the back of the site, in a natural environment of traditional cultivation and gardens, must definitely be abandoned. Finally, efforts should be made to make the site's welcoming and access facilities more functional and aesthetic.

By letter of 13 March 1996, UNESCO transmitted to Mr. Michel Eddé the experts' reports and recommendations concerning the two sites.

The Bureau thanked the Lebanese authorities for the efforts undertaken for the conservation of the sites of Baalbeck and Tyr, and recommended they take the necessary measures to ensure their preservation:

halt water infiltration and other interference in the underground tunnels,

total abandon of both the rectilinear road project envisaged behind the site, in order to preserve its natural environment and traditional agricultural activities, and the electrical transformer project.

Decisions adopted by the Committee in 1996

The Bureau took note with satisfaction of the information provided by the Delegate of Lebanon, namely that the road construction project passing behind the site had been definitely abandoned following a Council of Ministers decree, and that the water seepage problems in the underground passages was being treated.them to also undertake emergency conservation measures to halt the degradation of the inner north-east angle of the Temple of Bacchus, protect the visitors and foresee the necessary conservation and restoration measures. 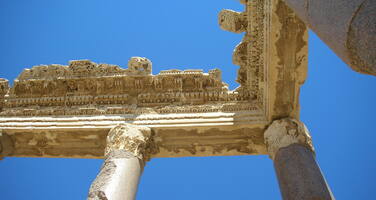