Previous deliberations: The Secretariat informed the Committee at its twenty-second session of damage caused by Hurricane Mitch to some World Heritage properties in Central America. The Committee requested the Secretariat, jointly with the advisory bodies, to provide a full report on the conditions of the World Heritage in the region of Central America to the twenty-third session of the Bureau.

New information: The Secretariat requested IUCN and ICOMOS to prepare such a report.

The Bureau may wish to examine the report that will be provided at the time of its session and take the appropriate decision thereupon.

ICOMOS presented a report on the conditions of the cultural World Heritage properties in Central America following the passage of Hurricane Mitch in October/November 1998. The report was prepared by an ICOMOS expert following a recent mission to the sites. ICOMOS provided information on five cultural sites:

Joya de Ceren (El Salvador): The protective roofs proved to be inadequate to protect the excavated areas of this site. Prolonged soaking of the volcanic soil resulted in rapid plant and fungal growth on the excavated structures. The expert recommended preventive action and the full incorporation of risk preparedness in the management plan that is under preparation with support of the Getty Conservation Institute.

Antigua Guatemala (Guatemala): Widespread flooding occurred up to one meter high, particularly in the Alameda del Calvario. Decisive action was taken immediately by the authorities, the city was cleaned and most of the damage has already been repaired.

Archaeological Park and Ruins of Quirigua (Guatemala): This was the most heavily damaged site visited by the expert. Canals and water management systems of the surrounding banana plantations were destroyed, causing mud and water to flood the site and impregnating the structures and sculptures with agricultural chemicals. Cleaning of the stone requires a long and expensive process. Most of the infrastructure at the site, storage facilities, fences etc. were also destroyed. There is a need for a management plan with risk preparedness provisions.

Maya Site of Copan (Honduras): The Copan River overflowed and retook its original course, destroying archaeological remains (Las Sepulturas) as well as a retention wall. Excavation tunnels in the pyramids that were not stabilised were affected. In ICOMOS’s opinion these should be immediately backfilled once the research and documentation concluded. A thorough review of the excavation policy for Copan should be undertaken.

The Ruins of Leon Viejo (Nicaragua): This site was nominated for inscription on the World Heritage List some years ago and recognised as having World Heritage values. The site was very seriously affected by a hurricane in 1982. As a consequence of Hurricane Mitch, the stream that was canalised at that time, overflowed and returned to its original course. The site was covered with mud and walls were destabilised. Cleaning and repair were immediately undertaken. The construction of protective walls and dredging of the stream will be required. 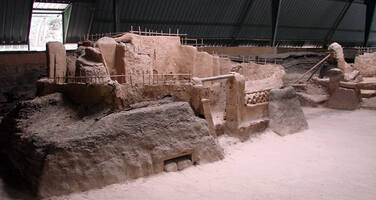