Partial collapse of some platforms

The Government of China requested the World Heritage Centre to undertake a mission to evaluate the state of conservation of five cultural World Heritage sites.

The Great Wall, which is over 50,000 km. long, forms a network of defences with varying dates across northern China. Aerial reconnaissance has recently identified another 300 km. of Wall in the Ning Xia area.

The mission monitored the Ming-dynasty Wall (of mediaeval and sub-mediaeval era) at Badaling and Mutianyu, both to the north of Beijing. At Mutianyu, 300m. of Wall (including three towers) was restored in 1990-92 with Us$146,000 provided by the World Heritage Fund. These funds were donated, in 1988, to WHF by "The International Committee for the Safeguard of Venice and the Great Wall". At Badaling, 3,720m. of the restored Wall are open to the public and at Mutianyu, 5,700m. Visitors number in millions, so tourist pressure on the monument is considerable. At Badaling tourist facilities have been allowed to encroach on the Wall and a cable car has been installed against the advice of the joint 1988 UNESCO/ICOMOS/ICCROM mission and of the State Bureau of Cultural Relics.

The present mission was pleased to note that recent conservation work was of a higher standard than earlier restorations, but nevertheless recommended that a training workshop be organized to teach masonry repair techniques specific to ruined stone monuments. It also made recommendations about the control of tourist facilities, particularly at Badaling.

The mission also monitored the Han-dynasty Great Wall at a number of locations in Gansu Province, in the Gobi Desert, including mud-built forts at Yu Men and He Cang. Although this section of the Great Wall, built of mud with layers of reeds, is some 2,000 years old, the arid desert conditions have resulted in the astonishing survival of these fragile materials. Fortunately, the number of tourists is very low at present; any increase in visitation numbers would put serious pressure on the preservation of the monument. 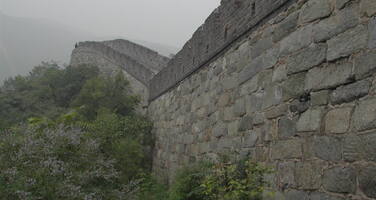