In conformity with the Paragraph 190 of the Operational Guidelines, the State Party submitted a state of conservation report, available at https://whc.unesco.org/en/list/710/documents/ and which addresses progress on a number of issues regarding conservation activities at the Gelati Monastery, such as the project on the Main Church of the Monastery, including the restoration of the cupola and the roof of the dome and transepts, and stone conservation. The World Bank programme that started in 2012 is still continuing. Within this program a budget has been agreed for further restoration and conservation of the Main Church and also for the construction of a visitor center outside the Monastery, as agreed by the World Heritage Centre and the Advisory Bodies in 2012.

The State Party reported that, as requested by the World Heritage Committee at its 37th session (Phnom Penh, 2013), a Major Boundary Modification for the property to set out a justification for Gelatri Monastery to satisfy the criterion for inscription on its own was submitted by the State Party on 1 February 2014. The nomination was considered complete and was sent by the World Heritage Centre for evaluation to the Advisory Bodies. It will be examined by the Committee at its 39th session.

The continuing conservation programme at Gelati Monastery and the external funding that has been obtained to allow it to continue for at least a further three years is noted. It should also be noted that funding from the World Bank will allow the development of a visitor center, the proposals for which have been reviewed by the Advisory Bodies.

The Major Boundary Modification for the property requested by the Committee has been submitted in the timeframe suggested.

3.  Welcomes the progress in the implementation of the conservation programme plan for Gelati Monastery;

4.  Notes that the State Party submitted on 1 February 2014 a request for a Major Boundary Modification for the property, further to the request of the Committee;

5.  Decides to retain the Bagrati Cathedral and Gelati Monastery (Georgia) on the List of World Heritage in Danger. 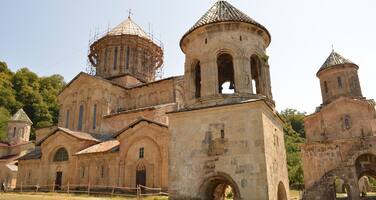