On 31 January 2014, the State Party submitted a state of conservation report. An executive summary of this report is available at https://whc.unesco.org/en/list/39/documents/. Progress is reported on the following:

The State Party has achieved some progress in addressing some of the recommendations of the 2012 reactive monitoring mission and the success of intensified anti-poaching efforts is reflected in reducing the number of elephants lost in recent months. The progress made in controlling invasive plant species within the property is also noted but no further information is provided on the status of Parthenium hysterophorus, an invasive weed potentially devastating for the grasslands and consequently grazing wildlife species as well as the livestock of the pastoralist communities.

The State Party has also made efforts in evaluating road-surfacing options for the heavily used main road through the property, and it is considered that prior to a decision on hardening this road, an Environmental Impact Assessment (EIA) should be carried out in cooperation with Tanzania National Parks and according to IUCN’s World Heritage Advice Note on Environmental Assessment. The EIA should assess the impacts of the different options on both Ngorongoro Conservation Area and the Serengeti National Park, and be submitted to the World Heritage Centre for review before a decision is taken.

Whilst acknowledging efforts undertaken by the management authority to address the impacts of livestock and of the increasing population pressure on the Outstanding Universal Value (OUV) of the property, an overall strategy to address these issues and reassess the usefulness of existing and planned projects needs to be developed in close cooperation with the different stakeholders and in particular the resident communities. Noting the importance of the dialogue, which has recently been initiated between the authorities, the local communities living in the property and other relevant stakeholders with assistance of UNESCO, it is recommended that the Committee encourage the State Party to use this process as an opportunity to review wide-ranging governance issues, including stakeholder involvement and benefit sharing, and to identify adequate options for sustainable livelihoods that do not compromise the exceptional resources of the property.

An independent report has been received concerning the allocation of a new lodge development site in an ecologically-sensitive location on the crater rim. A letter was sent to the State Party on 18 October 2013 to request more information on the project but at the time of writing of this report, no reply had been received. It is recommended that the Committee express its concern over the potential impact of any such development on the OUV of the property, and to request the State Party to provide more information, including a copy of the EIA for the project.

There is some concern about the advanced state of the proposals submitted by the State Party for a museum building at Laetoli, which would apparently involve the re-opening of the Laetoli footprints. It is recommended that the Committee request the State Party as a matter of urgency to halt all on-going action related to the re-opening of the trackway, or the construction of the adjacent museum, until a full technical review is carried-out and a technical workshop is held with the stakeholders, State Party, Advisory Bodies and UNESCO in order to evaluate options for the long-term conservation of these crucially important attributes of OUV and to develop a conservation strategy as previously agreed with the State Party.

Finally, it is noted that very limited progress has been achieved on the conservation and management of the cultural attributes of the property. While the setting up of an operational cultural department is an important step, there are many issues that have yet to be addressed, as requested by the Committee at the time of inscription as a mixed property. Sustained efforts will be required to carry out the mapping of the archaeo-anthropological sites, and to address the conservation of sites, including erosion at Olduvai, protection at Nasera and identifying the appropriate course of action for the Laetoli footprint trackway.

3.  Commends the State Party for the progress achieved in addressing the escalating threat of poaching, particularly affecting elephant populations;

4.  Welcomes the establishment of the Memorandum of Understanding between the Ngorongoro Conservation Area Authority (NCAA) and the Department of Antiquities and the proposed integration of the cultural department in the operational structure of the property, and urges the State Party to implement these proposals and ensure that adequate resources are secured for its long-term operation;

5.  Reiterates is concern about the impacts of livestock grazing and increased population pressure on the Outstanding Universal Value (OUV) of the property, and considers that existing and planned measures be reviewed and an overall strategy be developed to address these issues in close cooperation with the different stakeholders and in particular the resident communities;

6.  Also welcomes the initiation of a dialogue process with the local communities of the property aimed at improving stakeholder involvement in decision-making over land-use, identification of sustainable livelihoods, benefit-sharing and other issues, and encourages the State Party to use this process as an opportunity to review wide-ranging governance issues, including management and conservation approaches, stakeholder involvement and benefit sharing, and to identify adequate options for sustainable livelihoods that do not negatively impact on the OUV of the property;

7.  Notes the efforts made in evaluating road-surfacing options for the heavily used main road through the property, and requests the State Party to carry out an Environmental Impact Assessment (EIA) in cooperation with Tanzania National Parks, to assess the impacts of the different options on Ngorongoro Conservation Area and the Serengeti National Park, and to submit it to the World Heritage Centre for review prior to making a decision on how to stabilize this road;

8.  Also encourages the State Party to sustain efforts to implement the recommendations of the 2012 reactive monitoring mission with particular reference to road surface improvements, a road development strategy, control of invasive species and implementation of monitoring programmes;

9.  Expresses its concern at the advanced state of the Museum building at Laetoli for which no detailed plans nor appropriate Heritage Impact Assessments (HIA) have been submitted to the World Heritage Centre; and that the museum proposals have apparently been finalised in advance of a technical review workshop on conservation options for the Laetoli footprints;

10.  Also requests the State Party to submit the outcomes of the International Technical Committee meeting for Laetoli to be held in May 2014 to the World Heritage Centre for review by the Advisory Bodies before making any commitments to their implementation; and to halt the Laetoli museum project until an agreed approach for the conservation of the footprints has been achieved;

12.  Further expresses its concern about the potential impacts on the OUV of the property from a lodge development project on the crater rim, and further requests the State Party to provide more information on this project, including a copy of the EIA, in accordance with IUCN’s World Heritage Advice Note on Environmental Assessment;

13.  Acknowledges the commitment of the State Party to submit copies of relevant technical and regulatory documents for review by the Advisory Bodies and requests furthermore the State Party to provide an electronic and three printed copies of the draft revised management plan, the proposed cultural tourism strategy, the draft building codes, the draft road development strategy and other relevant documents for review by the World Heritage Centre and the Advisory Bodies as soon as they are available, and not later than 1 February 2015; 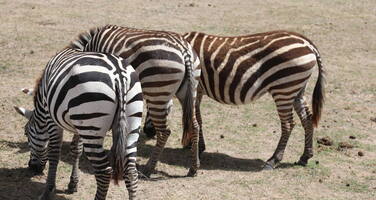