On 13 February 2014, the State Party submitted a report on the state of conservation of the property, which is available at https://whc.unesco.org/en/list/719/documents, and addresses the following issues:

The State Party did not invite an IUCN advisory mission to the property, as had been recommended by the World Heritage Committee.

The Committee is recommended to reiterate its request to the State Party to revoke or freeze the exploration and exploitation licenses already granted, in line with the Committee’s position that mining is incompatible with World Heritage status. It should be recalled that in its Decision 37 COM 7B.24 (Phnom Penh, 2013), the World Heritage Committee expressed its concern about the boundary changes of the Yugyd Va National Park which removed the protection status of these parts of the property, and the development of the Chudnoe gold mine within the property and as a result concluded that these constitute an ascertained danger to its Outstanding Universal Value (OUV), in line with Paragraph 180 of the Operational Guidelines.

In August 2013 the Supreme Court of the Russian Federation declared inoperative Order № 3 of the Ministry of Natural Resources and Ecology of the Russian Federation “On approval of the Regulations about “Yugyd Va” National Park”, dated 14 January 2010, thereby confirming that the original boundaries of the national park, which coincide with the boundaries of the northern component of the property, remain valid. The Supreme Court decision is publicly available on its website.

3.  Regrets that the State Party has reversed neither the boundary changes which removed the legal protection of four areas within the property nor the 19.9 square km gold mining concession and has not revoked or frozen mining exploitation licences granted inside the property as requested by the Committee at its 35th and 36th sessions, reiterates its position that mining activities are not compatible with World Heritage status, and urges the State Party to immediately halt all activities associated with gold mining in the property;

4.  Takes note of the August 2013 decision of the Supreme Court of the Russian Federation which declared inoperative the order of the Ministry of Natural Resources and Ecology on approval of the Regulations about “Yugyd Va” National Park”, thereby confirming that the original boundaries of the national park, which coincide with the boundaries of the northern component of the property, remain valid;

5.  Reiterates its request to the State Party to implement the following measures:

a)  Revoke or freeze the exploration and exploitation licenses already granted,

b)  Reverse the boundary changes made to Yugyd Va National Park;

6.  Notes that the State Party had submitted a re-nomination of the property proposing significant boundary modifications, which was incomplete and was therefore not transmitted for evaluation;

7.  Considers that any resumption of mining activities inside the property would provide the basis for immediate inscription on the List of World Heritage in Danger, in line with Paragraph 180 of the Operational Guidelines; 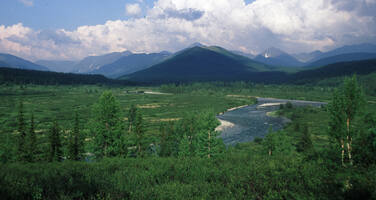