In June 2001, ICOMOS-Spain, together with the Vice-Chairman of ICOMOS International and representatives of ICOMOS-Cuba, ICOMOS-Costa Rica and ICOMOS-Paraguay, the President of the Association APUDEPA (Asociación de Acción Pública para la Defensa del Patrimonio Cultural Aragonés), other associations and authorities of several municipalities, visited the area and concluded that the project to enlarge the artificial lake should be suspended. After the necessary collection of information, the properties belonging to the Route of Santiago de Compostela should be restored. This report supported the first report from ICOMOS-Spain on the same issue.

On 11 April 2002, the Centre received extensive documentation from the Spanish Permanent Delegation, including a document on the social need to enlarge the barrage, documents on the ethnographic, archaeological and paleontological research carried out in the area, reports on the affected trail of the Route by the enlargement, and a legal report on the viability of transferring the trail of the Route of Santiago. This report coming from the Ministry of Education, Culture and Sport has been sent to answer the request of the World Heritage Bureau at its meeting in December 2001 concerning the enlargement of the barrage. At the time of the preparation of this document, no reply was received.

In June 2002, the Centre received a letter from the President of APUDEPA, with several annexes and documentation. In her letter, she indicated that the Regional Government of Aragon has changed the boundaries of the Route as they were fixed in 1993 when the site was nominated, asking the Centre to contact ICOMOS and the Spanish authorities on this question. On 28 February 2003, the Centre received a visit from the President of APUDEPA and the President of the Asociación del Río Aragón. They handed over a file with copies of newspaper articles and other documents referring to the negative consequences of the enlargement of the barrage. No further information has been received from the Permanent Delegation of the State Party.

ICOMOS stressed two points concerning the situation: 1. There appears to have been no direct response from the State Party regarding the viability of modifying the dam project so as to avoid flooding the 5 km stretch of the Route. 2. The apparent readiness of the Comunidad Autónoma of Aragón to change the course of this stretch as a result of “research … to establish the true trail of the Route” within its territory, calls into question the original nomination.

The result of a meticulous and prolonged research project, the Route inscribed on the List must surely be seen as authoritative, the more so since it is based to a considerable extent on the Callixtine Codex, which records the Route in great detail. A redefinition of the boundaries of a single length of the Route to conform to contemporary economic requirements carries with it a suspicion of sophistry. ICOMOS, therefore, proposes that the Committee should continue to apply pressure on the State Party to react to the suggestion that alternative solutions be sought to the enlargement of the Yesa Dam and the augmentation of water supplies in this region, where this is recognized to be of considerable economic and social significance.

1. Acknowledging the information received from the State Party in 2002,;

2. Expresses concern about the dam project and its effects on the World Heritage property of the Route of Santiago de Compostela;

1. Acknowledging the information received from the State Party in 2002,

2. Expresses concern about the dam project and its effects on the World Heritage site of the Route of Santiago,

3. Requests the State Party to provide a report by 1 February 2004 for review by the 28th session of the World Heritage Committee. 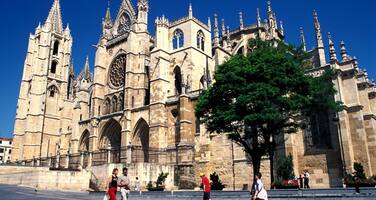