The mission noted a decline in the number of tourists due to the current political insecurity in the country, but this is seen as a temporary situation and tourism impacts should be regarded as a serious issue in future planning and site management. The waste generation and disposal problem, indiscriminate use of timber for meeting energy needs, and ill-planned development of housing (particularly for lodges and hotels) are problems associated with tourism. The mission recommended that these issues be addressed in co-operation with local organizations. For example, the Sagarmatha Pollution Control Committee (SPCC) and the Namche Youth Group (NYG) have extensive experience in dealing with waste management. The mission was informed about the lack of technical and financial means for supporting involvement of these groups in improving management effectiveness.

The mission also noted the ratification of the Letter of Agreement (31 December 2002) between the Ministry of Culture, Tourism and Civil Aviation (MOCTCA) and the Department of National Parks and Wildlife Conservation (DNPWC) for the implementation of the UNDP/SNV/DFID funded project “Tourism for Rural Poverty Alleviation Programme” (TRPAP). SNV is a Dutch organization that carries out development co-operation activities in the area. The project provides US$ 1.24 million over a 5-year period in order to assist in the revision of the National Park Management Plan, preparation of a tourism management plan, and to build capacity for staff and local community involvement in ecotourism. The mission highlighted the importance of this project to address key issues affecting the conservation of the site.

IUCN also noted the support of other agencies in conserving Sagarmatha: WWF supports the Sagarmatha Agro-Forestry Project in the buffer zone, the Himalayan Trust supports plantation of trees and sustainable forest management, and the Khumbe Bijli Company has made a significant contribution to meeting some of the local people’s energy needs by generating 600 kW hydropower capacity.

The mission was informed by MOCTCA that the Syangboche airstrip extension plan had been put on hold and that MOCTCA would not proceed with the development of the airstrip without DNPWC approval. The Ministry of Forests and Soil Conservation (MFSC) expressed its commitment to the protection of the site and its decision not to allow the project to proceed. IUCN has suggested that the State Party be requested to provide a written commitment to the Committee on this matter. The mission also recommended that the area already excavated at Syangboche for the airstrip extension be fully rehabilitated.

The mission observed deforestation and land degradation, mainly in the buffer zone and a number of enclaves within the Park, due to the extensive use of wood for domestic purposes. There is potential for the use of alternative energy sources, such as electricity and gas, and a potential role for the community groups, such as Community Forest User Committees and Community Forest User Groups in the promotion of these sources.

The mission supported the State Party’s intention to nominate an extension to the World Heritage site to include the adjacent Makalu Barun National Park. IUCN also noted the potential establishment of a transboundary World Heritage site with the Chinese side of Sagarmatha (Mt.Everest).

The full mission report is available, in English only, upon request.

2. Invites the State Party to continue the implementation of priority management needs identified under the Sagarmatha National Park Management Strategy Framework developed in 2000 while the UNDP/SNV/DFID Project is being implemented;

(a) provide a letter confirming this decision and ensure that the project will not proceed in the future, ; and

(b) request the Nepal Civil Aviation Authority under the Ministry of Culture, Tourism and Civil Aviation (MOCTCA) to remove the excavator and other construction materials from the property and provide adequate compensation to the Park authorities to enable the full rehabilitation of the area;

4. Requests the State Party to enhance co-operation with local stakeholders in the management of the property.

1. Commends UNDP, SNV and DFID for establishing the TRPAP project that will address various aspects of the Park and tourism management and provide benefits to local communities,

2. Invites the State Party to continue the implementation of priority management needs identified under the Sagarmatha National Park Management Strategy Framework developed in 2000 while the UNDP/SNV/DFID Project is being implemented,

3. Commends the State Party for halting the Syangboche airstrip project and requests that the State Party: (a) provide a letter confirming this decision and ensure that the project will not proceed in the future; and (b) request the Nepal Civil Aviation Authority under MOCTCA to remove the excavator and other construction materials from the site and provide adequate compensation to the Park authorities to enable the full rehabilitation of the area,

4. Requests the State Party to enhance co-operation with local stakeholders in the management of the site. 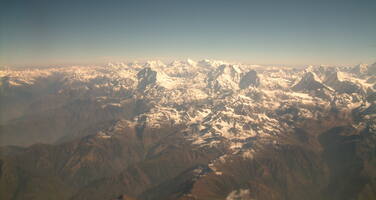