The Centre and IUCN reported to the 25th session of the Bureau (Helsinki, December 2001) of the potential impacts on the Serengeti and Mara ecosystems posed by the proposed Ewaso Ng’iro Hydroelectric Project in Kenya, including impacts on the wildebeest migration in the World Heritage site.  In this context, the importance of the Mara River Catchment to the site was noted.

As mentioned in the section of this report on the Mount Kenya World Heritage site, in November 2001 the Government of Kenya announced its authorization of forest excisions amounting to more than 170,000 acres from its remaining forests (estimated at between 2 and 10% of the country).

The Mau Forest was to lose approximately 148,000 acres (60,000 hectares) of land for human settlement.  The Mau Forest is one of Kenya’s remaining moist forests, and is the watershed for the Amala River, a main tributary of the Mara River.  The Mara River is key to the annual Serengeti migration, for which the site is inscribed.  It has also been reported that the proposed Mau excisions will significantly affect the traditional users, the Ogiek people.  The Mau Forest provides 40% of Kenya with water and five of the six major rivers flowing into the Rift Valley have become seasonal in the past few years; deforestation of the catchment is considered a major contributing factor.  IUCN notes that the announced clearing of Mau Forest and associated potential impacts on the Mara River underlines the strong need for integrated catchment management and transboundary collaboration.

IUCN reiterated that there is merit in the States Parties of Kenya and Tanzania establishing a joint committee through the Commission on East Africa Cooperation Arrangement to undertake a variety of in-depth studies on the entire catchments of the Ewaso Ng’iro, Lake Natron, Mara River systems, including cost-benefit studies on the impacts of forest clearing.  Such studies could also assess impacts on the Serengeti World Heritage site.

Urges the States Parties of the United Republic of Tanzania and Kenya to initiate a dialogue on the transboundary effects on the Serengeti World Heritage site from changes in the upstream catchment, and to request that IUCN, through its Regional Office for Eastern Africa, support the process leading to this dialogue.

"The Committee urges the States Parties of the United Republic of Tanzania and Kenya to initiate a dialogue on the transboundary effects on the Serengeti World Heritage site from changes in the upstream catchment, and that the States Parties should request IUCN, through its Regional Office for Eastern Africa, to support the process leading to this dialogue." 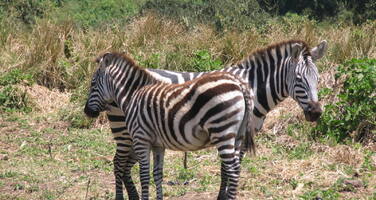