New information: To implement the Emergency Assistance grant approved by the Committee at its twenty-third session following the November 1999 floods in Central Vietnam, the worst recorded in modern times, the World Heritage Centre sent an initial assessment mission in December 1999 to prepare the terms of reference of a technical assessment and project identification mission. As requested by the Committee at its twenty-third session, the mission elaborated extrabudgetary project proposals on emergency rehabilitation activities as well as ones for disaster mitigation. The joint UNESCO – Vietnamese expert team developed 19 project proposals for Hue and Hoi An amounting to the total amount of over US$ 6 million.


The floods did not cause direct and immediate damage to the inscribed monuments in Hue but the experts concluded that long-term damage from humidity and timber decay would be certain if left untreated. With the exception of the Royal Arena, all major riverside monuments on the north-eastern bank and those near the Perfume River are now at risk of serious damage from future floods due to the northward shift of the course of the Perfume River and riverbank erosion.

The most evident damage was to the Minh Mang Tomb where the landscape was devastated due to the uprooting of over 20 ancient trees and erosion of a 500-metre section of the riverbank, bringing the river ten metres closer to the monument. The embankment protection alone has been estimated to cost some US$ 670,000 while the cost of conservation and repair of the architectural complex of the Ming Mang Tombs was established at US$ 1.8 million.

Damage has also been recorded in other monumental complexes such as the Hon Chen Temple, Tu Duc Mausoleum groups and to the important collection of textiles of the Hue Museum of Royal Fine Arts, among others. One of the consultants of this UNESCO expert team has stayed on in Hue to work with the national and local authorities as part of the joint-international emergency team. Representing the French NGO, CODEV and UNESCO, this expert who is a retired engineer of the French government agency DATAR, is drawing government and international donor attention to the urgent need for riverbank consolidation to mitigate disaster which could be caused by the next flood season in September-October this year. Meanwhile, US$ 20,000 of the emergency assistance grant from the World Heritage Fund is being used for timber decay detection equipment and emergency rooting to prevent further deterioration.

The International Information Meeting on Urban Conservation in Hue, organized by the Vietnamese National Commission for UNESCO and the Thua Thien-Hue Province, in collaboration with the World Heritage Centre, took place in Hue on 17-18 April 2000. The meeting presided by the Vice-Minister of Foreign Affairs of Vietnam and the acting Assistance Director-General for Culture of UNESCO reported on the flood damage, and on the urban heritage conservation needs. The results of the 3-year Hue-Lille Metropole decentralized co-operation project under the aegis of the Centre, on the urban and legal diagnosis was very well accepted by the participants, representing all concerned national and local authorities. The team’s assessment of the shortcomings of the draft conservation plan was also accepted and the national and local authorities have agreed to study the draft plan and regulations with a view to making the necessary revisions to strengthen development control and prevent further loss of urban heritage.

A proposal prepared by the French Bank, Caisse des Depots et Consignation (CDC), in cooperation with Lille and the World Heritage Centre, for a Housing Improvement Fund to finance subsidies and loans to private owners of heritage buildings located within the Hue World Heritage site was presented to the information meeting. To initiate this Fund of US$ 775,000, initially targeted for the restoration of some 300 historic buildings, a grant aid of US$ 224,000 from international donors is required. The Centre and the CDC are cooperating to seek funding support from international and regional financial institutions and donor agencies.

The Bureau notes with deep concern, reports on the gravity of the damage caused to the monuments and the urban heritage of the Hue World Heritage site by the November 1999 floods. The Bureau expresses appreciation for the efficient manner in which the Vietnamese authorities have handled emergency actions to prevent further damage to the site and for their efforts in preparing the project proposals, despite priorities for relief to the inhabitants. The Bureau requests UNESCO, notably its Bureau for Extrabudgetary Funding (BER) to co-operate with the World Heritage Centre in seeking donors for these projects. In view of the damage and the important funding support required to redress the situation and to mitigate risks of future seasonal floods, the Bureau requests the State Party to consider the inscription of this site on the List of World Heritage in Danger and to report to the Centre by 15 September on their decision.

The Bureau, at its twenty-fourth session, noted with deep concern, a report on the gravity of the damages caused to the monuments and the urban heritage of the Hue World Heritage site by the November 1999 floods. In view of the damage and the important funding support required to redress the situation and to mitigate risks of future seasonal floods, the Bureau requested the State Party to consider the inscription of this site on the List of World Heritage in Danger and to report to the Centre by 15 September on their decision. To date the State Party has not responded. An ICOMOS Reactive Monitoring mission took place in August – September 2000.

Despite efforts by UNESCO to solicit donor support for the emergency projects, prepared jointly by UNESCO and Vietnamese experts, only the Government of Belgium has responded expressing their willingness to consider support. The Government of Switzerland has informed the Centre of substantial bilateral support extended to Hué for the upgrading of the drainage system and flood control works.

For the urban conservation activities, also supported by the Committee and through the Hué-Lille Metropole decentralised co-operation, the European Commission has approved a project for a feasibility study to establish a Housing Improvement loan and subsidy scheme for the benefit of private owners of historic buildings located within the Hué World Heritage site. The Caisse des Depots et Consignation (CDC), a French national bank, in co-operation with Lille Metropole and the Centre are continuing to support this activity.

The Bureau was informed of the findings of the UNESCO-Vietnam expert team concerning the impact on the World Heritage values of the site caused by the heavy rainfall and floods of October-December 1999, which was the worst flood recorded since 1886. This technical study co-financed from World Heritage Fund’s emergency assistance, noted the gravity of the erosion, particularly along the left bank of the Perfume River, and the urgent need for riverbank consolidation to mitigate the risks of further damage from future floods. The long-term damage of the monuments and houses from humidity and timber decay if left untreated, was also noted by the Bureau.  Several delegates, including Hungary and Zimbabwe, noted the high quality of the crisis management plan and indicated the possibility of using it as a model elsewhere.

The Secretariat distributed to the Bureau members a document containing 19 project proposals (15 for Hué and 4 for Hoi An) for urgent rehabilitation and disaster mitigation activities.  The total amounted to US$ 6 million and was prepared by the UNESCO-Vietnam expert team.  Another project proposal for the establishment of a housing improvement fund for urban heritage conservation prepared by the Caisse des Depôts et Consignation (CDC) of France under the Hue-Lille Metropole Decentralized Cooperation Progamme, established by the UNESCO World Heritage Centre was also included. The Bureau remarked on the exemplary quality of the project proposals and the integrated approach, but requested the official association of ICOMOS, as the advisory body to the Committee, to evaluate the projects and the need for inscription of the site on the List of World Heritage in Danger.

The Bureau noted with deep concern, the report on the gravity of the damage caused to the monuments and the urban heritage of the Hué World Heritage site by the November 1999 floods. The Bureau expressed appreciation for the efficient manner in which the Vietnamese authorities have handled emergency actions to prevent further damage to the site and for their efforts in preparing the project proposals, despite priorities for relief to the inhabitants. The Bureau requested UNESCO, notably its Bureau for Extrabudgetary Funding (BER) to co-operate with the World Heritage Centre in seeking donors for these projects. In view of the damage and the important funding support required to redress the situation and to mitigate risks from future seasonal floods, the Bureau requested ICOMOS to undertake a reactive monitoring mission to prepare a recommendation for the inscription of the site on the List of World Heritage in Danger.   It requested the Secretariat to seek the views of the State Party by 15 September 2000 in this regard. The Representative of ICOMOS agreed to undertake a reactive monitoring mission to the site and to formulate a recommendation for consideration by the Bureau at its twenty-fourth extraordinary session for decision by the World Heritage Committee at its twenty-fourth session in 2000.

The Bureau may wish to examine the information provided above and the results of the ICOMOS mission at the time of the session and take a decision thereafter. 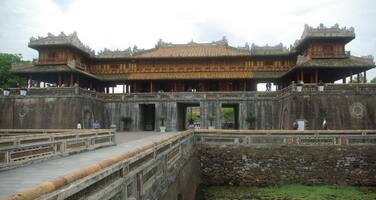