The work carried out in the context of the campaign is being financed mostly through bilateral co-operation and is in addition to the national effort. Thus for 1990 US $16,200,000 and 2,000,000 Swiss francs have been collected.

Placed on the World Heritage List in 1986 under criteria (iv), (v) and (vi), Sana'a has since 1984 been the subject of an international safeguarding campaign, the boundaries of the area on the List being the same as those of the area for which the campaign is being conducted.

The campaign is a good example of the catalytic role that can be played by Unesco in developing international co-operation in respect of the preservation of the cultural heritage. The Government of Yemen has set up a committee specially responsible for helping to conduct the campaign and has prepared in collaboration with Unesco, a detailed action plan making it possible to schedule over a period of time the restoration and promotion activities.

At the time when the site was included in the List, and when a large number of buildings were in need of restoration, the main problems were connected with the increasing unsuitability of the facilities and architecture for living conditions in a modern capital and with the need to exercise supervision over new buildings. When it conducted an evaluation, ICOMOS raised the question of the effectiveness of including the site in the World Heritage List in view of the dangers to which it was exposed. Furthermore, in 1989 information gathered by various Unesco missions led it to be believed that a scheme for the development of the Saila Wadi was being launched and might impair the integrity of the site. The Heritage Committee expressed concern in this regard and the Yemeni authorities stated that no scheme of this kind was in progress.

The work carried out in the context of the campaign is being financed mostly through bilateral co-operation and is in addition to the national effort. Thus for 1990 US $16,200,000 and 2,000,000 Swiss francs have been collected and will in principle be used as follows:

-  Equipment of executive office of the international campaign  $  230,000

-  Restoration of Samsarat al-Nahas and installation of a traditional crafts centre  $  330,000

The national authorities for their part are planning several nationally funded operations:

(i)  general plan for public services for the Old City of Sana'a;

Of the projects in progress, four should be completed this year:

1.  Ibn Al-Amir school will be finished in September this year, co-financed by Yemen Government and the Federal Republic of Germany.

3.  The southern part of the city wall, co-financed by Yemen Government and France.

4.  Three public baths. They will be finished in September, financed locally.

A UNDP/Unesco project (YEM/88/006) for a cost of $374,800 has been under way since May 1988 in support of local staff training activities and fund­raising. A detailed list of activities undertaken in the context of the campaign can be consulted in the Secretariat.

A request for international assistance amounting to $13,000 from the World Heritage Fund was approved in 1990 by the Chairman of the World Heritage Committee to enable the local authorities to benefit from the advice of a specialist in Islamic religious architecture for the protection and enhancement of the Great Mosque of Sana'a. 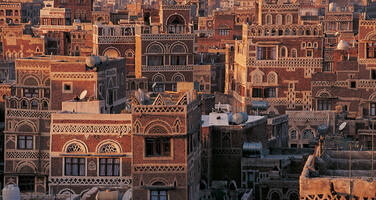