The World Heritage Centre and IUCN received the State Party’s report dated 10 February 2004. The report notes that the gazettement of Mount Kenya Forest Reserve as a National Reserve in July 2000 legally accords Kenya Wildlife Service the overall mandate to manage the entire property. Any other organization operating within Mount Kenya National Park/National Reserve is answerable to the Kenya Wildlife Service (KWS). The Service’s main objectives are:

(a)  Maintaining the integrity of the ecosystems at higher elevations - mainly the Park which comprises the afro alpine vegetation as well as nival zones, ensuring sustainable economic benefits from the area; and

(b)  Conserving Mt. Kenya National Park /National Reserve as a water catchment area by managing the natural forest as well as the industrial tree plantations.

The report also noted that a forest-coordinating unit has been formed under a memorandum of understanding between the two departments of the Ministry of Environment (Kenya Wildlife Services (KWS) and Forest Department (FD)). Under this arrangement the two institutions are co-managing Mount Kenya plantations, with KWS ensuring the overall security while the FD manages the silvicultural operations. IUCN noted from the report that KWS has very limited capacity to manage commercial plantations and is dependent on FD for expertise.

The report stated that the final draft of the ‘Mount Kenya National Park Management Plan’ is in place. The extent to which the plan will become fully operational or if it has been endorsed by all concerned parties is not clear. The draft plan, however, incorporates an adaptive approach with adequate flexibility to accommodate changes during the implementation period.

IUCN noted that controlled and regulated consumptive utilisation of indigenous and exotic forest products was confined and restricted in the former forest reserve, which is roughly located between 1200m and 3200m. The report noted that a total ban on tree harvesting was imposed by the Government in 2003 following the upgrading of the forest reserve to a national reserve; this ban still exists.

The report noted challenges caused by the free hold land tenure system which impede migration. There are three important traditional elephant migration corridors around the mountain namely: Mt. Kenya-Aberdare; Mt Kenya-Samburu/Meru National Parks via Imenti Forest; and Mt Kenya-Ngare corridor via Kisima. The World Heritage Centre and IUCN noted that the State Party has made efforts to negotiate with landowners regarding the acquisition of land to enable animal migration.

IUCN noted efforts made by the State Party on surveillance and law enforcement. It is reported that the two institutions have maintained sufficient pressure on illegal activities by intensifying aerial surveillance as well as vehicle and foot patrols. In the process several poachers have been arrested and prosecuted within the last six months and generally, illegal activities are declining. The report also revealed that consultations are ongoing with local communities through the community programme of Kenya Wildlife Service.

1.   Acknowledges the conservation efforts by the State Party as provided in the report of Kenya Wildlife Service through the Kenya National World Heritage Committee;

2.   Commends the State Party for positive actions undertaken for the conservation and protection of the property, particularly in relation to surveillance, community relations and law enforcement; 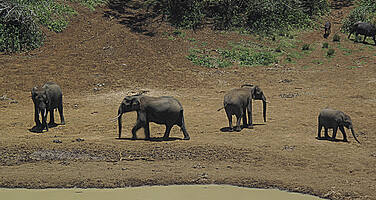