The State Party of Canada submitted a report on the state of conservation of the property on 31 January 2006. It states that the previously reported mountain pine beetle epidemic is continuing and is a concern related to forests both within and outside the World Heritage property. Within the serial property, the Mount Robson Provincial Park component is the most affected. Forest management activities under the Mount Robson Forest Health Strategy, a long-term plan developed in 2004, are inter alia expected to slow the further spread of mountain pine beetle. In 2005, mountain pine beetle population expansion was sporadic due to the cool summer and the effectiveness of forest management activities such as controlled felling and burning, and tree removal (limited to specific areas). In 2006, fuel reduction and fireguard preparations in the Swift Current wildland/urban interface area and around the park headquarters will be implemented. All management activities are subject to the British Columbia Parks Impact Assessment and coordinated with the other components of the World Heritage property.

The State Party report also provides an update on the Cheviot mine 3 kilometres east of Jasper National Park. As previously reported, the first phase of the Cheviot mine is fully operational, as a satellite mine, with coal transported 22 kilometres to the existing Luscar processing plant. In this manner, the project differs from the original stand-alone mine proposal, and it involves a smaller footprint at Cheviot than initially proposed. However, the State Party reports that conditions imposed at the time of mine approval, aimed at mitigating potential impacts on grizzly bears, have not been fully implemented although, some progress has been made. Conservation NGOs were unsuccessful in their latest efforts to contest the Cheviot mine approvals through legal challenges, and continue to lobby the Cheviot mine and government agencies to ensure all approval conditions are fully met.

According to the State Party report, Parks Canada’s priority interest is the maintenance of a sustainable population of grizzly bears in the Alberta Yellowhead Ecosystem, which includes federal lands in the World Heritage property and provincial lands in the Cheviot mine area. Therefore, Parks Canada continues to work with the Government of Alberta and industries in the area to advance strategies for carnivore conservation. According to a media release, the conservation NGOs, given that they were unsuccessful in their attempt to contest the Cheviot mine approvals (decision of Canada’s Federal Court on 17 August 2005), shifted their focus from legal challenges to getting the governments and government agencies concerned to address a number of issues arising from the operation of the Cheviot mine. This includes identifying and protecting replacement habitat for grizzly bears in compensation for the habitat that is lost as a result of the Cheviot mine. This compensation has not occurred yet.

The State Party should be commended for its extensive efforts in controlling the mountain pine beetle epidemic. However, concerns remain about the actual and potential adverse impacts of the operation of the Cheviot mine on the integrity of the property.

3. Noting proposals for changes to the nomination dossiers for some World Heritage properties in North America,

4. Approves the Statements of significance for the World Heritage properties in North America as included in Annex I of Document WHC-06/30.COM/11B;

7. Encourages Canada and the United States of America to submit any outstanding documentation related to World Heritage properties, as soon as possible;

8. Recommends that Canada and the United States of America continue, in cooperation with other Committee members, States Parties, the Advisory Bodies and the World Heritage Centre to explore, as appropriate, the potential for developing guidelines for management plans and principles for evaluating visual impacts for activities in and adjacent to World Heritage properties;

9. Encourages Canada and the United States of America to continue their strong collaboration and to consider how to enhance collaboration with the State Party of Mexico in matters of shared interest for natural and cultural heritage.

3. Requests the State Party to ensure that adverse impacts of the operation of the Cheviot mine on the integrity of the property are minimized and mitigated;

4. Further requests the State Party to keep the World Heritage Centre and IUCN informed of any important changes in the state of conservation of the property.

3. Requests the State Party to ensure that adverse impacts of the operation of the Cheviot mine on the integrity of the property are minimized and mitigated;

4. Further requests the State Party to keep the World Heritage Centre and IUCN informed of any important changes in the state of conservation of the property. 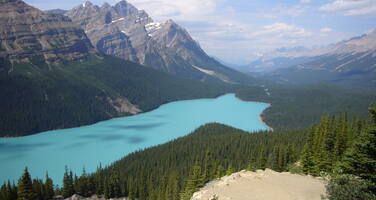