World Heritage in a Sea of Islands - Pacific 2009 Programme 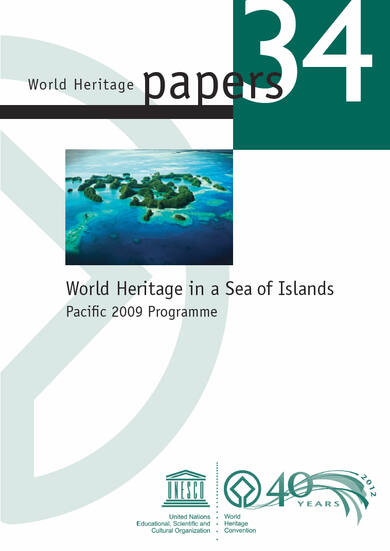 The Pacific region covers about one third of total surface area of the earth and comprises over one thousand islands and atolls. This reservoir and the wealth of cultural and natural diversity and traditional knowledge is first and foremost a living heritage. The region’s Indigenous communities are playing an important role as its custodians.

As most of the Pacific small islands joined UNESCO in the 1980s and 1990s and ratified the World Heritage Convention after the year 2000, their experience in international cooperation for heritage protection is relatively recent. Being a State Party to the World Heritage Convention provided an opportunity for these islands and territories to protect their rich cultural and natural heritage against environmental threats and development pressure, while re-establishing crucial socio-cultural ties and exchanges among Pacific Island nations.

Until recently, the Pacific Island countries were represented on the World Heritage List by one single property only: East Rennell in the Solomon Islands, inscribed in 1998. The Pacific Island countries and their heritage experts soon understood the need to devise a more coordinated and strategic approach to ensure the protection of their heritage at the international level through the World Heritage Programme.

The World Heritage Pacific 2009 Programme (2003-2009) was adopted at the 27th session of the World Heritage Committee in 2003 as a strategic regional initiative. It established clear and priority actions to be undertaken to achieve concrete results in the protection and management of Pacific heritage, as determined directly by the countries and territories concerned. The progamme set out the responsibilities of stakeholders and a timeframe for execution. This regional approach has been successfully implemented and followed-up by the Pacific World Heritage Action Plan (2010-2015), which places a strong emphasis on capacity building as well as community participation. It has
encountered such great success, to a large degree, because it took into account the aspirations of the Pacific countries and peoples to achieve sustainable development through the safeguarding of their irreplaceable heritage. Thanks to this programme, the number of sites from the Pacific region inscribed on the World Heritage List has increased from one to five.

This year, to mark the 40th anniversary of the World Heritage Convention, governments, institutions and individuals around the world are celebrating “World Heritage and Sustainable Development: the Role of Local Communities.” Consistent with this theme, the present publication explores the following three key components of World Heritage: ‘Diverse Values and Interconnected Histories’,‘Being Community in the Pacific’ and ‘Building Capacity.’ It highlights case studies in Vanuatu, the Solomon Islands, Tonga, Palau and the Marshall Islands et al. Thanks to this new publication, the pioneering efforts by all those involved in the World Heritage Pacific 2009 Programme will be fully recognized.

Lastly, I would like to express my gratitude to the Government of Australia for generously providing the financial support for this publication through the UNESCO/Australian Funds-in-Trust co-operation.