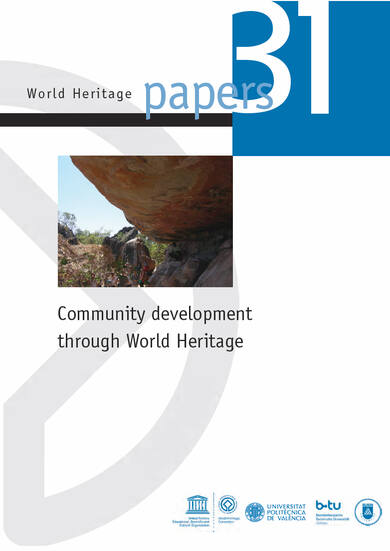 Community Development through World Heritage is a direct outcome of the international student exchange programme Sharing Our Heritages, which was sponsored by the Australian Government and the European Union.

The project concluded with a major conference on the theme of ‘Sharing Our Heritages (SOH): New Challenges for Conserving and Protecting Sites and for Managing Tourism’, which took place at the UPV in February 2008. All in all, the programme’s goal was to make the heritage of humanity, particularly its identity-building significance and its potential for community development, relevant and usable especially to young university students.

This publication has the same aim, although insights are offered into more detailed findings. As expressed in the title, heritage plays an important role in community development, and here it is understood as a cultural construct, which – if it is to be used to create identity – needs to be more than simply conserved. Its relevance needs to be communicated in the present so that it may continue into the future. An important aspect of this is the use of heritage and its preservation for socio-economic development worldwide, an aim that is explicitly part of the World Heritage Convention. To achieve this however, the Convention has to be interpreted as an instrument of development policy, and its implementation in this direction needs to be accelerated. It is to this end that the World Heritage Committee has developed a set of five Strategic Objectives, the five ‘Cs’ (Credibility, Conservation, Capacity-building, Communication and Communities) to support the Convention. These objectives make it clear that heritage is not simply something handed down from the past, but is a process that must be actively constructed and maintained in the present if it is to have any sustainable future. The structure and content of this publication reflect these intentions.

The first part – Impact of international designation on local communities – offers a general introduction to the political background operating behind World Heritage designation by looking at some of the issues posed by globalization, the development of a human rights discourse, the implementation of the Operational Guidelines and the new Strategic Objectives. Taken together, these chapters set the frame for those that follow.

In the second part – Challenges of tourism for communities – the topic of tourism as one of the most important resources for development is debated in the context of the World Heritage Convention. Note however that tourism as a resource is not discussed generally but in the context of certain situations and places; be it in the context of a management concept; as a resource presented through the internet; or as applied to Thailand. Unlike other publications that broadly debate tourism, this selection provides the opportunity to focus on the problematic impacts of tourism on heritage developments.

The aim in the third part – Appropriation of World Heritage values by communities – is similar in direction. The three chapters here focus on heritage values from different perspectives. While two contributions discuss the complexities posed by Fremantle Prison and Kakadu National Park and its inhabitants to site management and interpretation, the third looks at impacts of using World Heritage nomination in ways that close rather than open up the range of heritage values ascribed to a site.

Case studies are also the basis of the fourth and final part – Models of best practice for communities. Taking their cue from the aims of the five Strategic Objectives developed by the World Heritage Committee, the three chapters identify and analyse the specific goals that underpin World Heritage in terms of social and economic development. Once again, the value of these analyses is in their case study approach, which contextualizes the issues identified by the World Heritage Committee as needing specific attention. The value of these analyses is also the fact that the case studies they deal with come from countries where socio-economic development is crucial to survival – Uganda, Ethiopia and Cambodia.

It is our sincere hope that the range of issues discussed by the contributing authors, as well as the geographical reach of their case studies, will provide those involved with World Heritage with a useful conceptual and practical map with which to look at their own sites and the issues they face. They will find parallels to their own situations and potential answers to their problems, as well as encouragement to continue their efforts to safeguard, interpret and sustain the relevance of World Heritage to their communities and to the world.