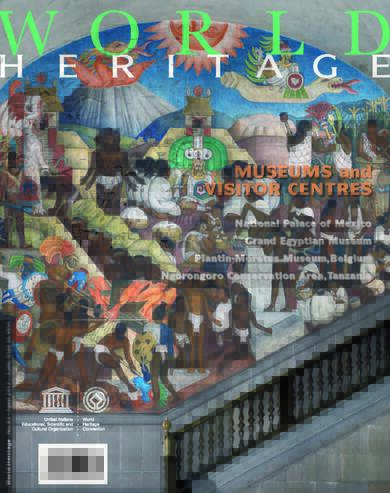 Thousands of museums are located in and around World Heritage sites. Site museums preserve the integrity of the sites through conservation efforts, but also enhance interpretation and visitor education. Experts, tourists and local communities all have a role in these activities. Museums can also help bolster the local and regional economy, and provide platforms for debate and discussion as a forum for tackling complex social and intergenerational issues.

UNESCO, notably through the recent adoption of a new Recommendation on the Protection and Promotion of Museums and Collections, their Diversity and their Role in Society (2015) helps countries to empower museums to fulfill their missions, achieving social cohesion, particularly among local communities and disadvantaged groups.

During times of conflict and civil unrest, where museums and heritage collections have been threatened by looters in search of valuable objects or symbols of national identity, UNESCO has intervened to secure and rehabilitate the collections. UNESCO also - together with many partners including ICOM and ICCROM - trains museum specialists in the conservation of collections, and in the inventorying and creation of documentation to contribute to the fight against illicit trafficking of cultural objects.

In this issue, we learn about the architectural complex of the National Palace of Mexico, a key element of the Historic Centre of Mexico City and Xochimilco; the Grand Egyptian Museum, currently under construction, and located only two kilometres north of the magnificent Giza Pyramids; the Plantin-Moretus Museum in Antwerp, Belgium where the Plantin and Moretus printing dynasty lived and ran their business for 300 years; and the Ngorongoro Conservation Area in Tanzania, an extraordinary natural sanctuary for Africa’s densest population of large mammals. In the interview, Maamoun Abdulkarim, Director of the Directorate General of Antiquities and Museums in Syria describes the struggle to protect his country’s cultural objects amid violent conflict. UNESCO’s key role in heritage protection was acknowledged in Resolution 2347 which was adopted unanimously by the UN Security Council in March 2017. It is the first resolution to focus on cultural heritage.

Museums are more than places where objects are exhibited and conserved, and they are our strongest allies to achieve common goals of sustainable development and intercultural dialogue. They play an important part in our experience of learning about our cultural and natural heritage, and contribute to the evolution and growth of our communities.

Sites and museums: A pact for heritage and diversity

With tourism growing worldwide every year, museums and interpretation centres are increasingly important to help visitors understand the cultural and historical significance of World Heritage sites.

The National Palace historical complex is a living museum for the World Heritage site, incorporating different collections and spaces closely linked to Mexico’s history and society.

The new museum presentation adjusts in a remarkable manner how we present the history of books to the needs of the present-day visitor.

A new museum for the Ngorongoro Conservation Area

The construction of the new Olduvai Gorge museum will increase diversification of tourism activities in Ngorongoro.

The GEM will become one of the world’s most important museum complexes, displaying as its main attraction the treasures of King Tutankhamun.

Heijokyu Palace: Recreating the past virtually

A project that uses information and communications technology (ICT) enables visitors to visualize how the Heijokyu Ruins appeared in bygone times.

Interview with Maamoun Abdulkarim, Director of the Directorate General of Antiquities and Museums in Syria (DGAM).

The work of ICOMOS and interpretation since 2015.