World Heritage in the Russian Federation 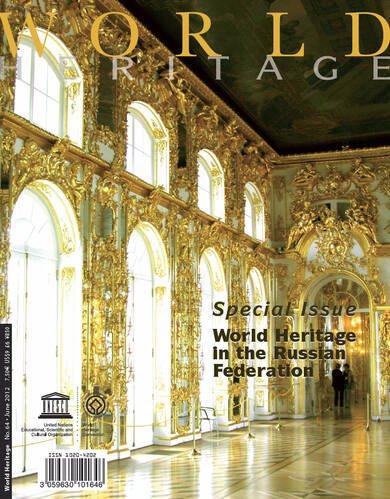 We are happy to publish this special issue dedicated to the World Heritage sites of the Russian Federation on the occasion of the 40th anniversary of the World Heritage Convention, which the Committee will be celebrating at its meeting in Saint Petersburg on 25 June 2012.

The inscription of both cultural and natural sites on the World Heritage List has progressed rapidly since the ratification of the World Heritage Convention by the Russian Federation in October 1988. Today, the List counts fifteen cultural and nine natural Russian sites – the latter including Virgin Komi Forests (3.3 million ha), and Putorana Plateau which covers 1.9 million ha and is surrounded by a 1.8 million ha buffer zone – ranking them among the largest listed terrestrial natural sites in the world.

It is also worth noting that Russia’s Tentative List includes twenty-seven more natural and cultural sites for possible inscription – some of which will be considered at the Committee session. This conveys the country’s continued and even ambitious commitment to the implementation of the Convention in the years to come. By any measure, the listed sites are impressive in their significance and scope, and deserve to be better known throughout the world. This issue devotes an article to each of them, and we are very pleased to publish messages from UNESCO Director-General Irina Bokova and Russian Minister of Foreign Affairs Sergey Lavrov, as well as an interview with H.E. Ms Eleonora Mitrofanova, Russian Ambassador to UNESCO and Chair of the World Heritage Committee.

The occasion of the present anniversary makes it apparent that forty years of work and reflection on the principles laid down in the Convention have had huge and lasting effects around the world. As Bernd von Droste, Founding Director of the UNESCO World Heritage Centre suggests in this issue, the understanding we have gained in this interval on the nature of our mission has very gradually shifted, as we have acquired a greater insight into ourselves as well as a better understanding of the world’s cultures and their perspectives. In this way, we have learned to prize not only monuments and landscapes, but also the memory of all that is most precious to us. In this way, too, we have learned to value and preserve World Heritage sites as important markers of the knowledge and history that have come down to us; protecting them against unconsidered destruction and reinforcing their role as witnesses of our dignity and worth.

World Heritage Committee Empowerment of the Convention: from theory to practical application

Map of World Heritage sites in the Russian Federation

Churches and Monasteries of Central Russia
Church of the Ascension, Kolomenskoye
Ensemble of the Novodevichy Convent
Architectural Ensemble of the Trinity Sergius Lavra in Sergius Posad