An Action Plan for the Rehabilitation of Cultural Heritage and the Safeguarding of Ancient Manuscripts in Mali was adopted at an international experts’ meeting organized by UNESCO and France at the Organization’s Headquarters on Monday.

The Action Plan for Mali has three priorities: rehabilitate cultural heritage damaged during the conflict with the active participation of local communities; take measures to protect the ancient manuscripts kept in the region; provide training activities so as to re-establish appropriate conditions for the conservation and management of cultural heritage, including manuscripts and intangible heritage. It is estimated to cost some US$ 11 million.

Measures foreseen under the plan concern both World Heritage sites and cultural heritage properties protected under national legislation. Specific actions are foreseen for Timbuktu, the Tomb of Askia in Gao, the Old Town of Djenne and the Cliff of Bandiagara (land of Dogon) as well as museums.

Comprehensive measures for the safeguarding and digitization of manuscript collections are also planned. The training activities foreseen by the plan concern all areas of cultural heritage preservation, both monuments and manuscripts.

The day-long meeting featured the participation of African and French decision makers including the ministers of culture of Mali and France. It was opened by UNESCO Director-General Irina Bokova, who reiterated the Organization’s commitment to work for cultural preservation in Mali:

“When a World Heritage site is destroyed, because of stupidity and violence, the whole of humanity feels it has been deprived of part of itself; that it has been injured.”

“The destroyed mausoleums and attempted destruction of manuscripts are a new manifestation of fanaticism, the old enemy of reason,” said French Culture Minister Aurélie Filippetti, “This particular fanaticism views every trace of the past as a testimony of cultural diversity that must be destroyed.” The Minister furthermore pledged France’s support for the reconstruction and enhancement of cultural heritage in northern Mali, at the request of the Malian authorities and of UNESCO.

“This crisis revealed the vulnerability of cultural heritage and the insufficient preparedness of heritage management structures to handle emergency situations,” declared Bruno Maïga, Minister of Culture of Mali. He also spoke of the illicit trade in Dogon fetishes or statues. The Minister furthermore welcomed the rallying of international support in favour of his country’s cultural heritage. 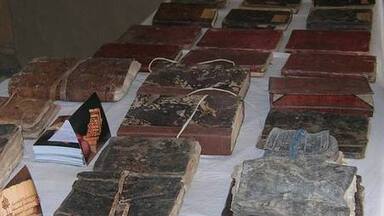 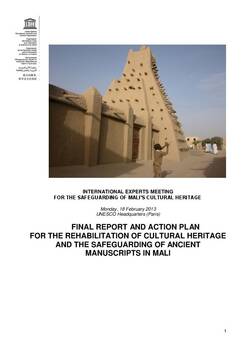 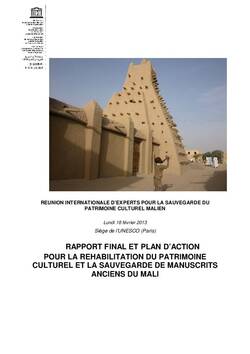