Mission to Potosí, Bolivia for eventual removal from List of World Heritage in Danger 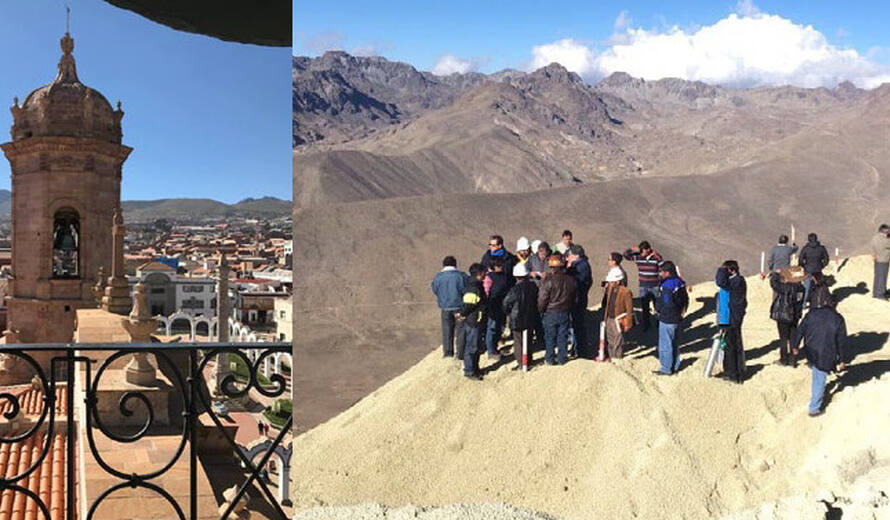 In the framework of the implementation of Decision 40 COM 7A.1 adopted by the World Heritage Committee at its 40th session (Istanbul, 2016), a Technical Advisory Mission was conducted by UNESCO World Heritage Centre and ICOMOS International, in support of the Plurinational State of Bolivia, from the 8 to the 11 May 2017.

The World Heritage Committee inscribed the City of Potosí on the World Heritage List in 1987 for its historical value as an outstanding example of major silver mine activities in modern times, and its association with the economic change brought about in the 16th century by the flood of Spanish currency resulting from the massive import of precious metals in Seville.

The current property includes not only the old industrial facilities of Cerro Rico, and the intricate system of aqueducts and artificial lakes that waters it, but also the colonial quarter with the Casa de la Moneda, the church of San Lorenzo, several noble mansions and the barrios mitayos.

Since 2014, due to the situation of vulnerability and risk of collapse of Cerro Rico’s summit and the need to strengthen the conservation and management systems of the property, the World Heritage Committee decided to inscribe it on the List of World Heritage in Danger and requested the elaboration of the Desired State of Conservation together with a calendar of implementation of the necessary corrective measures to remove the property from the List of World Heritage in Danger.

The members of the mission held a series of technical meetings and participative working sessions with representatives of the ministries concerned, the national and regional government, the Municipality of Potosí and the mining cooperatives, COMIBOL, FIDECOMIN, among others.

The mission also visited City of Potosí to verify the progress made in the stabilization of Cerro Rico, the current status of the Kari Kari lagoons, the ongoing conservation and restoration works in the Historical Centre, Ribera de los Ingenios, the barrios mitayos and other components of the inscribed property.

As a result, a document entitled Desired State of Conservation for the removal of City of Potosi from the List of World Heritage in Danger was prepared, with the respective corrective measures and a timetable for its implementation in a period of 5 to 7 years. The document will be submitted for adoption by the World Heritage Committee at its 41st session which will be held in July 2017 in Kraków, Poland.

More information on the state of conservation of City of Potosí: whc.unesco.org/en/soc/3330