The Churches of Chiloé represent a unique example in Latin America of an outstanding form of ecclesiastical wooden architecture. They represent a tradition initiated by the Jesuit Peripatetic Mission in the 17th and 18th centuries, continued and enriched by the Franciscans during the 19th century and still prevailing today. These churches embody the intangible richness of the Chiloé Archipelago, and bear witness to a successful fusion of indigenous and European culture, the full integration of its architecture in the landscape and environment, as well as to the spiritual values of the communities. 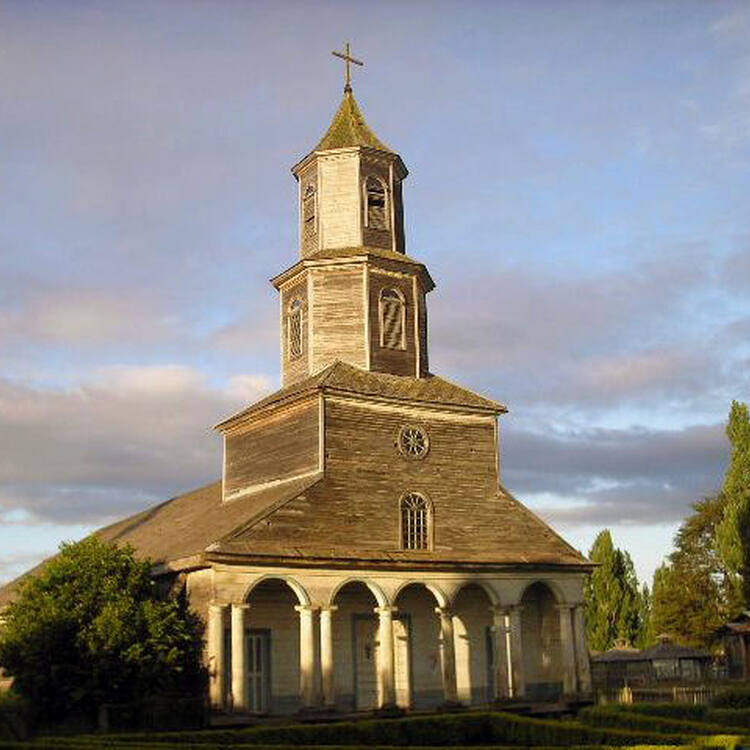 In the Chiloé archipelago off the coast of Chile are about 70 churches built within the framework of a “Circular Mission” introduced by the Jesuits in the 17th century and continued by the Franciscans in the 18th and 19th centuries. The most exceptional illustrations of this unique form of wooden ecclesiastical architecture (the so-called Chilota School of architecture) are the churches of Achao, Quinchao, Castro, Rilán, Nercón, Aldachildo, Ichuac, Detif, Vilupulli, Chonchi, Tenaún, Colo, San Juan, Dalcahue, Chellín and Caguach. These sixteen churches are outstanding examples of the successful fusion of European and indigenous cultural traditions. The abilities of the people of Chiloé as builders achieved its highest expression in these wooden churches, where farmers, fishermen and sailors exhibited great expertise in the handling of the most abundant material in this environment, wood. Along with the churches, the mestizo culture resulting from Jesuit missionary activities has survived to the present day.

This isolated archipelago was colonized by the Spanish in the mid 16th century. The Jesuits, who arrived in 1608, used a circulating missionsystem in their evangelization of the area: religious groups made annual tours around the archipelago, staying for a few days at locations where churches were erected jointly with the communities of believers. The rest of the year a specially trained layperson attended the spiritual needs of the inhabitants. The construction techniques and architecture of the churches of Chiloé are specific to this locale: European experience was adapted and reformulated, giving rise to a vernacular tradition, supported by a great quantity and variety of testimonies which are still in use. Along with the culture of the archipelago, these churches are the result of a rich and extensive cross-cultural dialogue and interaction.

Along with their basic architectural design (tower façade, basilican layout and vaulted ceiling), these sixteen churches are significant for their building material, their construction systems and the expertise demonstrated by the Chilote carpenters, as well as for their interior decoration, particularly the traditional colours and the religious images. The churches are distinguished by an indigenous tradition of building in wood strongly influenced by boat-building techniques, as shown by the forms and jointing of the tower and roof structures. The orientation and location of the churches is deliberate: constructed according to the demands of the sea, they were arranged on hills to be seen by navigators and to prevent flooding. Their associated esplanades remain important components: they embody communication with the sea; they are the scenes of religious festivals; and even those that have been transformed into formal plazas still evoke the arrival of the missionaries during their circulating mission. Devotional and communitarian practices, religious festivals and supportive group activities such as minga (unpaid community work) are key components of the intangible values of the relationship between the communities and the churches. Also of importance is the subsoil of the churches, which one day may reveal information about the relationship between the locations of the churches and pre-Hispanic indigenous ritual sites.

Criterion (ii): The Churches of Chiloé are outstanding examples of the successful fusion of European and indigenous cultural traditions to produce a unique form of wooden architecture.

Criterion (iii): The mestizo culture resulting from Jesuit missionary activities in the 17th and 18th centuries has survived intact in the Chiloé archipelago, and achieves its highest expression in the outstanding wooden churches.

All the elements necessary to express the Outstanding Universal Value of the 13.9-ha serial property are located within its boundaries. The boundaries are nevertheless very constricted, and most of the components lack a coherent buffer zone.

The collapse of the church of Chonchi’s tower as the result of a storm in March 2002 highlighted the fact that the state of conservation and the vulnerability of the churches were worse than previously assessed, particularly at the time of nomination. These churches require constant conservation efforts; the nature of the building material and the environmental characteristics make continual maintenance an imperative. The communities have always assured their conservation, but current phenomena associated with modernization and globalizations have increased the vulnerability of the churches.

The Churches of Chiloé present a high degree of authenticity in terms of their forms and designs, materials and substances, and locations and settings. Their architectural forms, materials and building systems constitute the zenith of a typological evolution, and have been preserved without substantive changes. Their function as places of worship has also been preserved. Interventions have retained all the richness of the typologies of connections, joints and fittings; period technology has been recovered and applied; and exceptional combinations of connections of a deeply local and singular character have been discovered. The traditions, techniques and management systems have been maintained, as have the essential conditions of the sites. Recent restorations have influenced a substantive reflection on the role of the intangible heritage.

The sixteen churches of Chiloé are part of the Catholic Church’s Diocese of Ancud. They are administered by the Bishop of Ancud and by parish priests who have the support of the Friends of the Churches of Chiloé Foundation, a private entity presided over by the Bishop himself and created specifically for the conservation and enhancement of the churches. The Foundation was created by the Diocese to address the communities’ needs related to conservation, to bring professionals into the conservation process and to secure contributions by the State for their protection and restoration. The sixteen churches of Chiloé were declared a National Monument of Chile by means of various Decrees under Law No. 17.288 (1970). The supervision and protection of these assets is carried out by the Government of Chile through the National Monuments Council. The problem of the lack of coherent buffer zones for the property’s components is being addressed through the protection and regulation of the surrounding areas.

The clearest challenges for sustaining the Outstanding Universal Value of the property over time are the recovery and promotion of a local “culture of maintenance” for the buildings; the effective religious and community use of the churches by the population; and the active participation of local people in the conservation effort. The unified and selfless participation of the community in the conservation and preservation of the wisdom, expertise and ancestral knowledge of the carpenters, as well as participation in preventive maintenance and critical restoration, are essential in this regard.

The sustainability of the conservation effort is a significant challenge: the churches are located at the centres of their communities’ development, and a formula must be found to ensure their conservation in the context of any such development. The Government of Chile, with the support of the Inter-American Development Bank, has implemented a large-scale program since 2003 that has managed to reverse serious damage, particularly in the tower façades. Formulas must be found to ensure that, for example, tourism may result in tangible benefits for the communities and churches while at the same time avoiding the high risks of commercialization or trivialization.

A shortage of fine hardwoods and the protection of the species that provide them represent current challenges. The use of alternative woods that have the exceptional properties of larch and cypress is therefore being explored. Investigating, recording and transmitting the building techniques to new generations are essential, as well as research on the properties of different woods and on the treatments that mitigate the effects of weathering and attacks by xylophages. Finally, it is necessary to make advances in risk preparedness and in the environmental protection of these churches.

The churches of Chiloé present a delicate balance of social, environmental, physical and spiritual factors. It is the spiritual value inherent in these sixteen churches that gives rise to the complexity of their conservation. This is not a matter of simply repairing buildings; the challenge here is much greater, and in that challenge the very significance of heritage endeavour is in question.