Wartburg Castle blends superbly into its forest surroundings and is in many ways 'the ideal castle'. Although it has retained some original sections from the feudal period, the form it acquired during the 19th-century reconstitution gives a good idea of what this fortress might have been at the height of its military and seigneurial power. It was during his exile at Wartburg Castle that Martin Luther translated the New Testament into German. 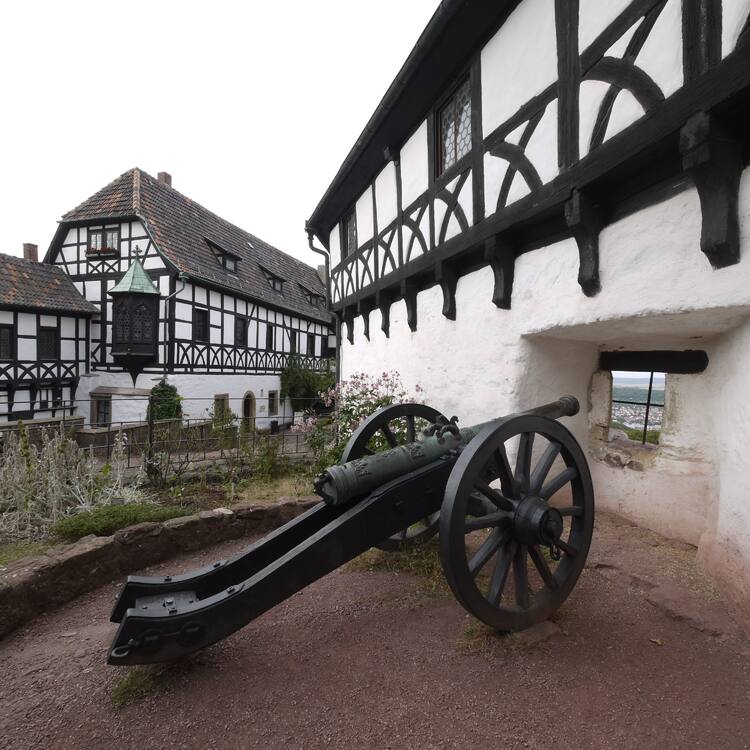 Wartburg Castle blends superbly into its forest surroundings and is in many ways "the ideal castle". Although it contains some sections of great antiquity, it acquired the current layout over the course of 19th-century reconstructions. This renewal of interest was justified by its symbolic nature for the German people, and today the castle continues to be a symbol of the nation's past and present. Its current state is a splendid example of what this fortress might have been at the peak of its military and seigneurial power.

Wartburg Castle is perched at a height of some 400 m above the delightful countryside, south of the city of Eisenach in Thuringia in central Germany. Its varied aspect and the sense of harmony it evokes are only two of its attractions for visitors. What makes Wartburg Castle such a magnet for memory, tradition, and pilgrimage is that it stands as a monument to the cultural history of Germany, Europe, and beyond.

Lutherans the world over know of the castle as the very place where Martin Luther made his translation of the Bible. The veneration of Saint Elizabeth, which extends far beyond the frontiers of Germany, includes Wartburg Castle where she lived and worked. The patronage of Hermann I, Landgrave of Thuringia, occupies an extraordinary place in the creation of a national literary tradition. In poetry and in legends, Wartburg Castle, the medieval Court of the Muses, bears an undying reputation through the names of Walther von der Vogelweide and Wolfram von Eschenbach. While these authors represented the first steps in German literature, and Martin Luther's translation of the New Testament marked the creation of a unified and accessible written German language, Wartburg Castle is also associated with the beginnings of a bourgeois and democratic nation, through the content and effects of the Wartburg festival of German students' associations. From the very earliest days of its existence, this fortress of the Landgraves of Thuringia has repeatedly acted as a venue for and witness of historic events and activities worthy of renown as a monument to national and world history.

The artistic and architectural importance of the palace, built in the second half of the 12th century, is no less significant. In execution and ornamentation, it is unrivalled and represents one of the best-preserved secular constructions from the late Norman period to be found on German soil. Thanks to this broad range of religious content and historic data, and because of its significance in the history of the arts, Wartburg Castle attracts around half a million visitors every year, from all over the world.

Criterion (iii): The Wartburg Castle is an outstanding monument of the feudal period in central Europe.

Criterion (vi): The Wartburg Castle is rich in cultural associations, most notably its role as the place of exile of Martin Luther, who composed his German translation of the New Testament there. It is also a powerful symbol of German integration and unity.

The Wartburg Castle includes all elements necessary to express the Outstanding Universal Value of a venue for and witness of historic events. It is of adequate size to ensure the features and processes, which convey the significance of the property.

The stone-built palace in its lower sections is an important example of civilian architecture of the Norman period. The same can be said of the masonry sections of the rampart and the South Tower. The remainder of the property is a reconstruction carried out under the influence of romantic ideas together, in this particular case, with an attempt to resurrect forms that would bear witness to the presence of the great historical personages who once inhabited the castle (St Elizabeth, Luther, etc) and offer an illustration of a political idea in search of national unity. The conditions of authenticity may be defined here in the light of two principles: archaeological authenticity found mainly in the palace, and fortifications; and symbolic authenticity, where the form matters less than the idea it represents. This is not simply a building, but architectural work of art, one of great quality, expressive of a true idea.

The Wartburg Castle is covered by protective legislation at regional (State of Thuringia) and municipal levels. The listed monument encompasses the entire hill on which the castle is built. The protected area of Wartburg is part of the planning zone of Eisenach, which restricts all forms of development around the monument. Much of the wooded hillside below the castle is designated as a nature protection area (NSG) and fulfils the function as a buffer zone for the property.

The property is owned by the Wartburg Foundation of Eisenach, established in 1992. The Foundation is a legal entity under civil law, with its headquarters in Eisenach. The property is administered by the Stiftungsrat der Wartburg-Stiftung (Board of Directors of the Wartburg Foundation) in conjunction with the Thuringian Ministry of Education, Science, and Culture (Office for the Protection of Historic Monuments of the State of Thuringia).

Funding is provided by the following sources: Bundesministerium des Inneren (Federal Ministry of the Interior), Thüringer Ministerium für Bildung, Wissenschaft und Kultur (Thuringian Ministry of Education, Science, and Culture), Thüringisches Landesamt für Denkmalpflege und Archäologie (Office of the State of Thuringia for the Preservation of Historic Monuments and Archaeology), and the Foundation's own funds.

The above bodies are also responsible for the maintenance and preservation of the property, in conjunction with the Bauhütte der Wartburg team. A management plan describing the management system, the management requirements, and visitor management has been set up.