The List Memphis and its Necropolis – the Pyramid ...
Print

Memphis and its Necropolis – the Pyramid Fields from Giza to Dahshur

Memphis and its Necropolis – the Pyramid Fields from Giza to Dahshur

The capital of the Old Kingdom of Egypt has some extraordinary funerary monuments, including rock tombs, ornate mastabas, temples and pyramids. In ancient times, the site was considered one of the Seven Wonders of the World. 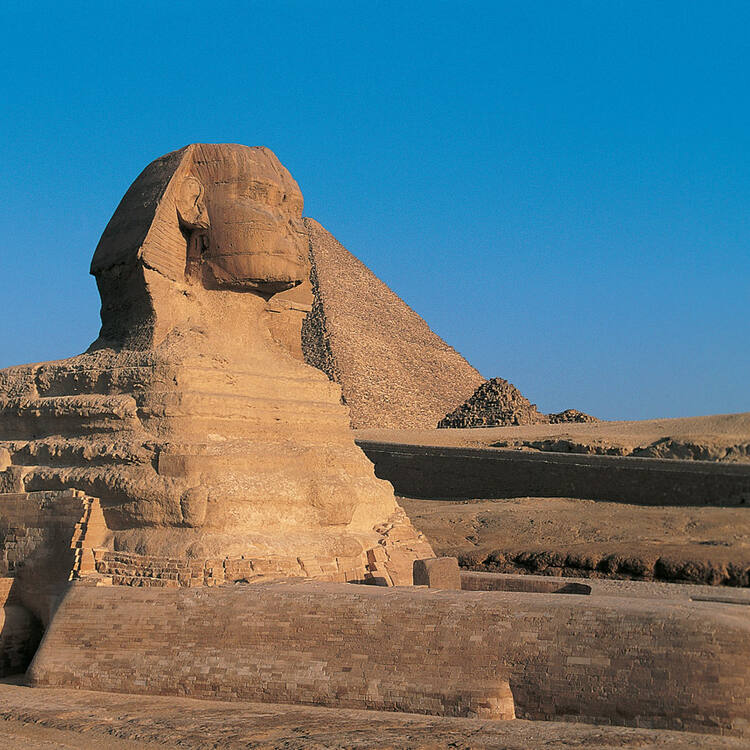 Memphis is located in the center of the floodplain of the western side of the Nile. Its fame comes from its being the first Capital of Ancient Egypt. The unrivaled geographic location of Memphis, both commanding the entrance to the Delta while being at the confluence of important trade routes, means that there was no possible alternative capital for any ruler with serious ambition to govern both Upper and Lower Egypt. Traditionally believed to have been founded in 3000 BC as the capital of a politically unified Egypt, Memphis served as the effective administrative capital of the country during the Old Kingdom, then during at least part of the Middle and New Kingdoms (besides Itjtawy and Thebes), the Late Period and again in the Ptolemaic Period (along with the city of Alexandria), until it was eclipsed by the foundation of the Islamic garrison city of Fustat on the Nile and its later development, Al Qahira. As well as the home of kings, and the centre of state administration, Memphis was considered to be a site sacred to the gods.

The site contains many archaeological remains, reflecting what life was like in the ancient Egyptian city, which include temples, of which the most important is the Temple of Ptah in Mit Rahina. Ptah was the local god of Memphis, the god of creation and the patron of craftsmanship. Other major religious buildings included the sun temples in Abu Ghurab and Abusir, the temple of the god Apis in Memphis, the Serapeum and the Heb-Sed temple in Saqqara. Being the seat of royal power for over eight dynasties, the city also contained palaces and ruins survive of the palace of Apries overlooking the city. The palaces and temples were surrounded by craftsmen’s workshops, dockyards and arsenals, as well as residential neighbourhoods, traces of which survive.

The Necropolis of Memphis, to the north and south of the capital, extends southwards from the Giza plateau, through Zawyet Elarian, Abu Ghurab, Abusir, Mit Rahina and Saqqara, and northwards as far as Dahshur. It contains the first complex monumental stone buildings in Egyptian history, as well as evidence of the development of the royal tombs from the early shape called "mastaba" until it reaches the pyramid shape. More than thirty-eight pyramids include the three pyramids of Giza, of which the Great Pyramid of Khufu is the only surviving wonder of the ancient world and one of the most important monuments in the history of humankind, the pyramids of Abusir, Saqqara and Dahshur and the Great Sphinx. Besides these monumental creations, there are more than nine thousand rock-cut tombs, from different historic periods, ranging from the First to the Thirtieth Dynasty, and extending to the Graeco-Roman Period.

The property also includes the remains of many smaller temples and settlements, which are invaluable for understanding ancient Egyptian life in this area.

Criterion (i): In Memphis was founded one of the most important monuments of the world, and the only surviving wonder of the ancient world, namely, the Great Pyramid of Giza. Its architectural design remains unparalleled and scientists continue to conduct research on how it was constructed. The Pyramid Complex of Saqqara is also a great masterpiece of architectural design, for it contains the first monumental stone building ever constructed and the first pyramid ever built (the Pyramid of Djoser, or the Step Pyramid). The great statue of Rameses II at Mit Rahina and the pyramids of Dahshur are also outstanding structures.

Criterion (iii): The ensemble of structures and associated archaeological remains at Memphis, including the archaic necropolis at Saqqara, dating back to formation of Pharaonic civilization, the limestone step pyramid of Djoser, the oldest pyramid to be constructed, the tombs and pyramids that reflect the development of funerary monuments, and the remains of the city, together form an exceptional testimony to the power and organization of the ancient capital of Egypt.

Criterion (vi): Memphis is associated with the religious beliefs related to the God of the Necropolis "Ptah" who was sanctified by the kings, as well as with outstanding ideas, artistic works and technologies of the capital of one of the most brilliant and long-standing civilizations of this planet.

The Necropolis of Memphis contains within its boundaries all key attributes that convey the property’s Outstanding Universal Value. The perfection of ancient building techniques has ensured the structural resistance of the main monuments to natural forces through time. They still display their beauty and convey their inestimable artistic and historic value, preserving all the main features that directly and tangibly associate them with the events, religious ideas and the development of methods of burial through different periods. The vicissitudes of history from 2200 BC until contemporary times have caused extensive damage that make them vulnerable in terms of surface details.

The extensive number of smaller monuments and underground remains in the five main archaeological sites, as well as the sensitivities of the whole Giza Plateau, mean that the scope and extent of the remains as an ensemble also has considerable vulnerabilities, as a result of development and infrastructure pressures.

In terms of setting, the monuments and the site of the capital are vulnerable to development, as well as to the indirect impacts of urban growth, both of which have the potential to erode their context between the Nile River and the desert and their ability to convey their sacred, spiritual and other associations in a powerful way.

A comprehensive system of statutory control operates under the provisions of the Protection of Antiquities Law No. 117 of 1983 as amended by the Law No. 3 of 2010, for the protection of monuments. It also established the rules for preserving archaeological sites.

Despite the efforts for protection and requirements to retain its World Heritage status, a comprehensive management plan for the overall property has not been formulated. The major challenge is that the property contains five major archaeological sites and the conservation, forward planning, visitor management and capacity development for each of these needs to be brought together in one Management Plan that sets out an overall governance structure. Such a plan is urgently needed.

The Ministry of Antiquities has conducted a number of conservation projects on the property. More recent initiatives in Saqqara and Dahshur (2012) are being carried out with the involvement of all major stakeholders as well as the local community in the management of the site. There are also ongoing projects for the development and rehabilitation of the Giza Plateau in collaboration with all government bodies in Egypt (Giza Plateau Master Plan). The interventions in some of the most significant structures have been made in accordance with the international principles of restoration, with respect to the legibility of the edifices and to the principle of reversibility. The Sanctuary’s location and setting has been almost entirely preserved, so that visitors are still able to experience the spiritual character of the archaeological site.

There is currently no buffer zone although work is ongoing by the Ministry of Antiquities to delineate one and ensure its protection in response to development pressures. This needs to be submitted to the World Heritage Committee.