Classical Chinese garden design, which seeks to recreate natural landscapes in miniature, is nowhere better illustrated than in the nine gardens in the historic city of Suzhou. They are generally acknowledged to be masterpieces of the genre. Dating from the 11th-19th century, the gardens reflect the profound metaphysical importance of natural beauty in Chinese culture in their meticulous design. 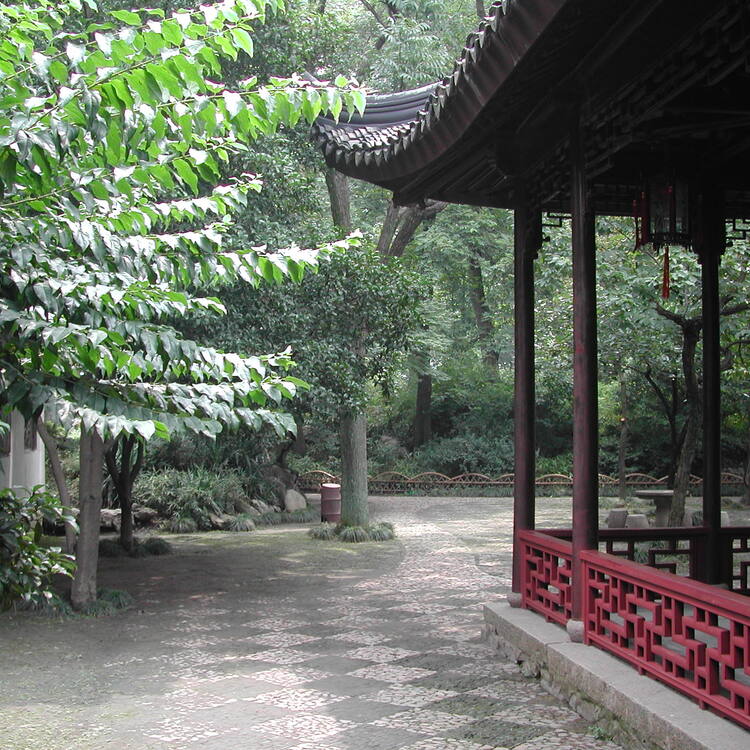 The classical gardens of Suzhou, Jiangsu Province, China date back to the 6th century BCE when the city was founded as the capital of the Wu Kingdom. Inspired by these royal hunting gardens built by the King of the State of Wu, private gardens began emerging around the 4th century and finally reached the climax in the 18th century. Today, more than 50 of these gardens are still in existence, nine of which, namely the Humble Administrator’s Garden, Lingering Garden, Net Master’s Garden, the Mountain Villa with Embracing Beauty, the Canglang Pavilion, the Lion Grove Garden, the Garden of Cultivation, the Couple’s Garden Retreat, and the Retreat & Reflection Garden, are regarded as the finest embodiments of Chinese “Mountain and Water” gardens. The earliest of these, the Canglang Pavilionwas built in the early 11th century on the site of an earlier, destroyed garden. Conceived and built under the influence of the unconstrained poetic freehand style originally seen in traditional Chinese landscape paintings, they are noted for their profound merging of exquisite craftsmanship, artistic elegance and rich cultural implications. These gardens lend insight into how ancient Chinese intellectuals harmonized conceptions of aestheticism in a culture of reclusion within an urban living environment.

Garden masters from each dynasty adapted various techniques to artfully simulate nature by skillfully adapting and utilizing only the physical space available to them. Limited to the space within a single residence, classical Suzhou gardens are intended to be a microcosm of the natural world, incorporating basic elements such as water, stones, plants, and various types of buildings of literary and poetic significance. These exquisite gardens are a testament to the superior craftsmanship of the garden masters of the time. These unique designs that have been inspired but are not limited by concepts of nature have had profound influence on the evolution of both Eastern and Western garden art. These garden ensembles of buildings, rock formations, calligraphy, furniture, and decorative artistic pieces serve as showcases of the paramount artistic achievements of the East Yangtze Delta region; they are in essence the embodiment of the connotations of traditional Chinese culture.

Criterion (ii): Within a time span of over 2,000 years, a unique but systematic form of landscaping for these particular types of gardens was formed. Its planning, design, construction techniques, as well as artistic effect have had a significant impact on the development of landscaping in China as well as the world.

Criterion (iv): The classical gardens of Suzhou are the most vivid specimens of the culture expressed in landscape garden design from the East Yangtze Delta region in the 11th to 19th centuries.  The underlying philosophy, literature, art, and craftsmanship shown in the architecture, gardening as well as the handcrafts reflect the monumental achievements of the social, cultural, scientific, and technological developments of this period.

Criterion (v): These classical Suzhou gardens are outstanding examples of the harmonious relationship achieved between traditional Chinese residences and artfully contrived nature.  They showcase the life style, etiquette and customs of the East Yangtze Delta region during the 11th to 19th centuries.

The settings and features of the heritage property cover all essential elements and key values of the classic gardens of Suzhou. Archives ranging from the 11th to the 20th century, such as in Chronicle of Suzhou Municipality, Chronicle of Wu County, Chronicle of Tongli Town, and Record of Jiangnan Gardens by Tong Jun in 1937, Inscription of Pingjiang Map, Ying zao fa yuan (Rules of Traditional Architecture) by Yao Chengzu in 1937, and Classical Gardens of Suzhou by Liu Dunzhen in 1979, are records of detailed surveys, maps and drawings of these classic gardens. These gardens preserved varied architectural features such as structure and layout, architectural forms such as rock and plant configurations, plaques, couplets, and furniture. Within the borders of the buffer zone, essential elements including rivers, streets, alleys, vernacular residences as well as a cultural atmosphere, all have been preserved. These essential elements holistically feature the styles, vista, atmosphere, and artistic mood of the “urban scenery” around the classic gardens of Suzhou.

The style evolution of classic gardens of Suzhou has been recorded in detailed volumes of reminiscent verses, poems, paintings and maps of each historical period from the 11th Century. Information about the gardens in each historical period is found in the ancient trees, plaques, couplets, brick and stone carvings, inscriptions and other precious immovable cultural relics in these areas. Local traditional gardening techniques and values have been handed down from generation to generation, always adhering to design concepts  that strive to create miniature worlds in limited spaces, and gardening practices that strive to simulate nature with meticulous details while adapting to local conditions. Garden masters of each dynasty consistently used traditional materials and techniques in the repairing and maintenance of these gardens. The local government has insisted on minimum intervention in conservation work for the purpose of respecting the historic condition of these heritage sites and controls the impact of modern urbanization around them, keeping intact the charm of these classical Suzhou gardens.

The classical gardens in Suzhou on the World Heritage List are all listed by the State Council as State Priority Protected Sites, and therefore subject to strict conservation and management laws and regulations including the Law of People’s Republic of China on the Protection of Cultural Relics. The government of the Suzhou municipality established an agency for the conservation and management of the gardens and cultural heritage in 1949. The Suzhou Municipal Garden and Landscape  Administration Bureau, which includes the Heritage Supervision Department, Heritage Monitoring and Conservation Centre and site management office, is the responsible managerial entity for each garden.

So far the classical gardens of Suzhou have been well preserved. Management and Protection Regulations of Suzhou Garden and the Conservation Plan for the World Heritage Classical Gardens of Suzhou have been issued, in which the property area and buffer zone are clearly defined. The protection of these gardens has been incorporated into the framework of the Master Plan of Suzhou City. Conservation and management institutions at all levels have determined and will focus on the formulation and enforcement of all respective laws and regulations, and interim and long term conservation plans.  All measures serve a common purpose: to minimize the impact of urbanization by strictly monitoring and supervising various factors that could potentially affect these gardens, including through regulating approved procedures for construction projects within the buffer zone; reducing population density; improving living conditions and heritage awareness of residents around the area, and mitigating the pressures that arise from commercial activities and tourism.  The ultimate goal is to guarantee the scientific, orderly conservation and management of these classical gardens of Suzhou.