On 3 November 2003, the Director-General of the State Administration of Cultural Heritage of China informed the Director of the World Heritage Centre of plans to build a new Suzhou Museum within the protective buffer zone of the World Heritage property. This new Museum construction project in the immediate vicinity of the Humble Administrator’s Garden in Suzhou has been a subject of concern from various sources, including the press and Chinese experts, as this project in the Centre of Suzhou city may possibly affect the World Heritage value of the Classical Gardens of Suzhou. On 17 November 2003, the Centre requested the Chinese authorities to provide further information concerning the plan and description of the project and detailed maps showing the exact location of the proposed Museum project. The State Party was informed that it is not advisable to undertake major projects of this nature without prior assessment of potential environmental impact and that the Committee should be provided with complete information for examination and approval prior to its implementation.

The Centre received the requested documents on 21 January 2004 from the State Administration of Cultural Heritage of China, which were transmitted to ICOMOS for review and comments. ICOMOS was also asked to consider the possibility of sending a reactive monitoring mission to examine the impact of the proposed project and the state of conservation of this World Heritage property.

ICOMOS provided its analysis of this project and recalled that the World Heritage Committee, when deciding on the inscription of the Classical Gardens of Suzhou on the World Heritage List in December 1997, requested the Chinese authorities to submit a nomination to extend World Heritage protection to include the entire historic town of Suzhou whose cultural value, with its canal system and hundreds of gardens, extends beyond the four nominated gardens.

ICOMOS noted that the preservation plan for the existing architecture indicates very precisely the buildings which need to be preserved (in red), improved (in yellow), or renovated (in green) and that a few red buildings are located where the new museum is planned. Moreover, the choice of
Mr I.M. PEI as the architect of this museum is considered excellent.

However, ICOMOS raised several technical questions regarding the location of the new museum that could be easily answered on site. The Centre and ICOMOS are therefore organizing, in coordination with the State Party, a reactive monitoring mission to the World Heritage property in May/June 2004. The mission findings and recommendations will be reported to the Committee during its 28th session.

1. Having examined the state of conservation of this property,

2. Notes that the architectural design for the New Suzhou Museum is compatible with the visual aspects and buildings traditions of the property;

3. Expresses concern over the urban development pressure in Suzhou, and the renewal and reconstruction of the historic and traditional urban fabric of the city;

5. Encourages the Chinese authorities to continue their efforts to protect the urban historic fabric of Suzhou surrounding the World Heritage property, by carrying out a thorough survey of historic buildings and urban landscape of the Old City area;

6. Suggests that the Chinese authorities to study in the future the possibility to consider an extension of the World Heritage property of the Classical Gardens of Suzhou to include the historic town of Suzhou, together with other historic canal towns, within the same geo-cultural area in the provinces of Jiangsu and Zhejiang;

7. Requests the World Heritage Centre and ICOMOS to provide technical assistance to the Chinese authorities to review and update the existing management plans for this property, using the case of New Suzhou Museum and other similar rehabilitation or reconstruction projects in the historic quarters of Suzhou, to ensure long-term comprehensive management of the urban fabric and the landscape;

8. Requests the State Party to submit a progress report to the World Heritage Centre, by 1 February 2006 on measures taken to enhance the conservation and presentation of the World Heritage property, including a publication of the architectural surveys of historic buildings, for examination by the Committee at its 30th session in June 2006.

1.  Takes note of the ICOMOS reactive monitoring mission findings and recommendations, which took place in May/June 2004. 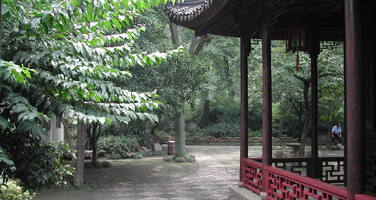