The List City of Vicenza and the Palladian Villas of ...
Print

Founded in the 2nd century B.C. in northern Italy, Vicenza prospered under Venetian rule from the early 15th to the end of the 18th century. The work of Andrea Palladio (1508–80), based on a detailed study of classical Roman architecture, gives the city its unique appearance. Palladio's urban buildings, as well as his villas, scattered throughout the Veneto region, had a decisive influence on the development of architecture. His work inspired a distinct architectural style known as Palladian, which spread to England and other European countries, and also to North America. 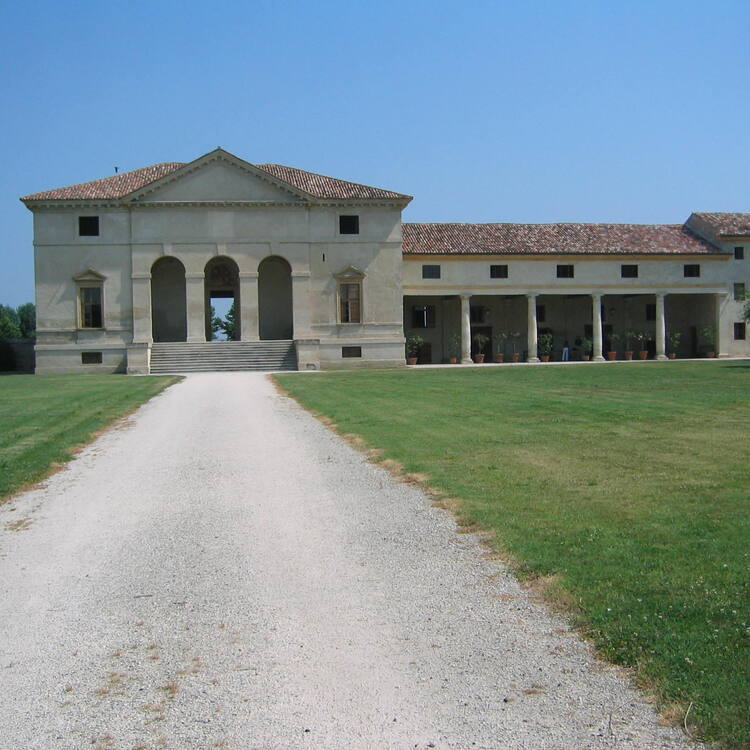 Founded in the 2nd century BC in northern Italy, Vicenza prospered under Venetian rule from the early 15th to the end of the 18th century. The work of Andrea Palladio (1508–80), based on a detailed study of classical Roman architecture, gives the city its unique appearance. The palazzi, or town houses, were fitted into the urban texture of the medieval city, creating picturesque ensembles and continuous street facades in which the Veneto Gothic style combines with Palladio's articulated classicism.

The definitive Palladian country villa synthesizes, both figuratively and materially, the functional aspects of management of the land and the aristocratic self-glorification of the owner. lts core is the house-temple, embellished with a monumental staircase and crowned by a pediment supported by columns of the loggia. Porticos extend alongside the wings starting from the main building, and often end with towers. The different components are linked by a common classical language and are ordered according to a well-defined hierarchy.

Vicenza is widely, and with justification, known as la città di Palladio. However, he was the central figure in an urban fabric that stretches back to antiquity and forward to Neoclassicism. As such,Vicenza has acquired a world status that has long been recognized and reflected in the literature of architectural and art history. Basing his works on intimate study of classical Roman architecture, Palladio became the inspiration for a movement without parallel in architectural history.

Vicenza, birthplace of this movement, retains many of Palladio's original buildings and as such is a unique survival of a total humanist concept based on a living interpretation of antiquity. The property extends the recognition of the Outstanding Universal Value of the work of Andrea Palladio to the other manifestations of his creative genius in the Veneto region, covering his versatility in applying his principles to rural as well as urban contexts.

Criterion (i): Vicenza represents a unique artistic achievement in the many architectural contributions of Andrea Palladio, integrated within its historic fabric and creating its overall character. Scattered in the Veneto, the Palladian villas are the result of this Renaissance master’s architectural genius. The numerous variations of the villa pattern are evidence of Palladio’s constant typological experimentation, carried out by means of the reworking of classical architecture patterns.

Criterion (ii): Palladio’s works in the city of Vicenza and in the Veneto, inspired by classical architecture and characterized by incomparable formal purity, have exerted exceptional influence on architectural and urban design in most European countries and throughout the world, giving rise to Palladianism, a movement named after the architect and destined to last for three centuries.

The property is composed of several elements, all showing its exceptional value: the perimeter includes the city of Vicenza with its twenty-three most representative Palladian buildings erected in the urban area and twenty-four of the most representative extra-urban villas. The 21st-century industrial development resulted in a strong transformation of the areas surrounding the city, affecting the original relationships between city and countryside. The villas have kept their integrity and are well preserved, within a territorial context which underwent several changes and for this reason was excluded from the site perimeter. Various parts of the property have been exposed to development pressures and the impact of agricultural and forestry regimes. There is some risk of flooding but these issues are being addressed by the property managers.

When applied to an urban area, authenticity includes a consideration of the urban structure, the form of the individual buildings that make up the townscape, the use of traditional building materials and techniques, and the functions of the buildings. In these terms Vicenza as a whole has preserved its authentic character, especially in relation to la città di Palladio.

The form of Palladio’s buildings is documented in his Quattro Libri dell’architettura (1570) and it has changed relatively little since they were constructed in the 16th century. The function of many of the palaces in Vicenza has changed from domestic to commercial, with consequent internal changes. The urban fabric of the city has undergone remarkably little change, and still retains the historic townscape known from early engravings.

The authenticity of the villas is also high. Detailed archival, technical and scientific studies have aimed at identifying the original forms of the villas. From these, it has been possible to specify the appropriate materials and techniques for use in restoration and conservation projects.

The protection of the site is guaranteed by several legal measures of protection. The Palladian buildings in Vicenza and the Palladian Villas listed in the property are all protected under the Decreto Legislativo 42/2004, Codice dei Beni Culturali e del Paesaggio: a safeguarding measure which ensures any activity on the site must be authorized by the relevant Soprintendenza (local office of the Ministry for Cultural Heritage and Activities).

Special protection plans applied to all the buildings ensure careful preservation, according to the theoretical principles of restoration works. The urban planning tool for the city of Vicenza has defined some special measures for the preservation of the twenty-three Palladian buildings located in the historic centre.

The site Management Plan was developed by several public and private institutions. The UNESCO office, set up inside the Municipality of Vicenza, takes care of technical and administrative aspects and is charged with the monitoring of the site Management Plan. Given the site’s complexity, the general coordination is shared between the Ministry of Culture and the Veneto Region, while the Province of Vicenza coordinates provinces and municipalities. The coordination system aims to overcome the fragmentation of initiatives, fostering synergetic relationships between institutions.

The principal aims of the Management Plan are to recover and revitalize the urban image, characterized by a strong Palladian mark, through the definition of intervention priorities inside the historical centre and the buffer zone, to restore and preserve the villas and the surrounding open spaces, and to define a study for identifications of buffer zones around the villas. It encourages the growth of awareness of heritage value in the local population by means of spreading knowledge and allowing participation in the choices and the management of the heritage. As well, the management plan defines further actions for the UNESCO site, aimed to support its successful management, such as improvement of accommodation and leisure facilities and initiatives, and also of infrastructure and transport systems.