These volcanic islands are inhabited by a population of around 5,700 giant lizards, whose appearance and aggressive behaviour have led to them being called 'Komodo dragons'. They exist nowhere else in the world and are of great interest to scientists studying the theory of evolution. The rugged hillsides of dry savannah and pockets of thorny green vegetation contrast starkly with the brilliant white sandy beaches and the blue waters surging over coral. 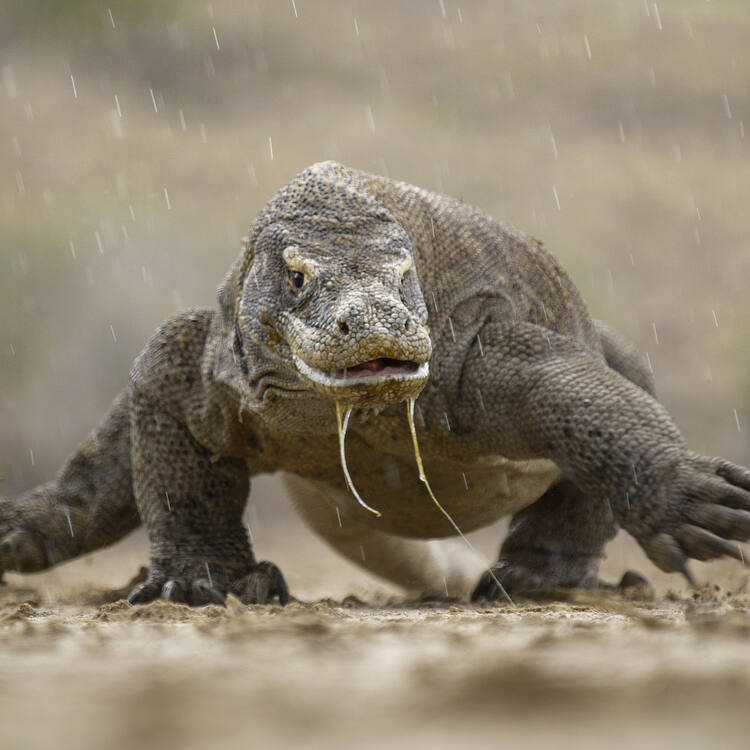 Komodo National Park, located in the center of the Indonesian archipelago, between the islands of Sumbawa and Flores, is composed of three major islands (Rinca, Komodo, and Padar) and numerous smaller ones, all of them of volcanic origin. Located at the juncture of two continental plates, this national park constitutes the “shatter belt” within the Wallacea Biogeographical Region, between the Australian and Sunda ecosystems. The property is identified as a global conservation priority area, comprising unparalleled terrestrial and marine ecosystems and covers a total area of 219,322 ha. The dry climate has triggered specific evolutionary adaptation within the terrestrial flora that range from open grass-woodland savanna to tropical deciduous (monsoon) forest and quasi cloud forest. The rugged hillsides and dry vegetation highly contrast with the sandy beaches and the blue coral-rich waters.

The most remarkable inhabitant of Komodo National Park is the Komodo Lizard, Varanus komodoensis. These giant lizards, existing no-where else in the world, are of great scientific interest, especially for their evolutionary implications. Most commonly known as 'Komodo Dragons', due to its appearance and aggressive behavior, the Komodo Lizard, is the largest living species of lizard, growing to an average length of 2 to 3 meters. The species is the last representative of a relic population of large lizards that once lived across Indonesia and Australia. As well as being home to the Komodo dragon, the Park provides a refuge for many other notable terrestrial species such as the orange-footed scrub fowl, an endemic rat, and the Timor deer. The rich coral reefs of Komodo host a great diversity of species, and the strong currents of the sea attract the presence of sea turtles, whales, dolphins and dugongs.

Criterion (vii): Komodo National Park is a landscape of contrasts between starkly rugged hillsides of dry savanna, pockets of thorny green vegetation, brilliant white sandy beaches and blue waters surging over coral, unquestionably one of the most dramatic landscapes in all of Indonesia. Demonstrating exceptional natural beauty that is all the more remarkable as a counterpoint to the dominant lushness of vegetation which characterizes vast areas of forested Indonesia, and with which most of the world associates the archipelago. An irregular coastline characterized by bays, beaches and inlets separated by headlands, often with sheer cliffs falling vertically into the surrounding seas which are reported to be among the most productive in the world adds to the stunning natural beauty of landscapes dominated by contrasting vegetation types, providing a patchwork of colours.

Criterion (x): Komodo National Park contains the majority of the world’s areas in which wild populations of the Komodo dragon lizard still exist. The largest and heaviest of the world’s lizards, the species is widely known for its impressive size and fearsome appearance, its ability to effectively prey on large animals, and a tolerance of extremely harsh condition. The population, estimated at around 5,700 individuals is distributed across the islands of Komodo, Rinca, Gili Motong and some coastal regions of western and northern Flores.

Other fauna recorded in the park are characteristic of the Wallacean zoogeographic region with seven species of terrestrial mammal, including an endemic rat (Rattus rintjanus) and the crab-eating macaque (Macaca fascicularis) and 72 species of birds, such as the lesser sulphur-crested cockatoo (Cacatua sulphurea), the orange-footed scrub fowl (Megapodius reinwardt), and noisy friarbird (Philemon buceroides). The coral reefs fringing the coast of Komodo are diverse and luxuriant due to the clear water, intense sunlight and rapid exchange of nutrient-rich water from deeper areas of the archipelago. The marine fauna and flora are generally the same as that found throughout the Indo Pacific area, though species richness is very high, notable marine mammals include blue whale (Balaenoptera musculus) and sperm whale (Physeter catodon) as well as 10 species of dolphin, dugong (Dugong dugon) and five species of sea turtles.

Encompassing the rugged topography that reflects the position of the park within the active volcanic “shatter belt” between Australia and the Sunda shelf, the boundaries of the Komodo National Park encircle the main park features, including the outstanding scenery and the unique species it hosts; komodo monitor, birds, marine mammals, coral reef-species, and others. The boundaries are considered adequate to secure the habitat and the main ecological processes to preserve them. The extensive marine buffer zone surrounding the park is key to maintaining the integrity and intactness of the property and the number of exceptional species that it hosts.

Illegal fishing and poaching remain the main threats to the values of the property and its overall integrity. There is an extensive marine buffer zone to the park, in which management authority staff has authority to regulate the type of fishing permitted and to some extent the presence of fishermen from outside the area. This buffer zone, which assists in controlling poaching of the terrestrial species that provide the prey species for the komodo lizard, will become significant in the overall long-term protection of the property.

Komodo National Park is managed by the central government of Indonesia through the Directorate General of Forest Protection and Natural Conservation of the Ministry of Forestry. The history of protection afforded the site goes back to 1938 while official protection began when Ministerial Decree declared the area as a 72,000 ha National Park in March 1980. This area was subsequently extended to 219,322 ha in 1984 to include an expanded marine area and the section of mainland Flores. Comprised of Komodo Game Reserve (33,987 ha), Rinca Island Nature Reserve (19,625 ha), Padar Island Nature Reserve (1,533 ha), Mbeliling and Nggorang Protection Forest (31,000 ha), Wae Wuul and Mburak Game Reserve (3,000 ha) and surrounding marine areas (130,177 ha) the Komodo Biosphere Reserve was accepted under the UNESCO Man and the Biosphere Programme in January 1977. In 1990 a national law, elevating the legislative mandate for conservation to the parliamentary and presidential level significantly empowered the legal basis for protection and management.

In order to ensure the effective management and protection of the park and its exceptional landscapes and biota, the park is governed through the 2000-2025 Management Plan and a 2010-2014 Strategic Plan, which will require revision and updating. These plans are important for ensuring the effective zoning system of the park and guaranteeing the sustainability of the ecosystems of the property. The management authority is known for designing specific plans to guide management decisions which will require updating in line with changes to priorities and threats, in particular expected increases in visitor numbers and impacts from tourism.

The Park receives strong support and resources from the central government of Indonesia. As a tourism location known worldwide, the Indonesian Government has a specific program for ecotourism management to promote the park at the international level and to ensure the sustainability of tourism activities. Additionally, in order to address illegal fishing and poaching, regular patrolling of the marine and terrestrial areas is carried out for law enforcement and a number of the problems and impacts associated with these activities have decreased. Community awareness and empowerment programs are being implemented to engage the local villagers regards to the sustainable use of natural resources and park conservation. Research and study of the unique biological features of the park is also being promoted and supported by the management authority.

Increasing levels of tourism and matters related specifically to the komodo lizard are the major management issues that have been focused on to date. A broadening of the management focus to address issues within the marine area of the park along with other terrestrial species is required to ensure the long-term effective conservation of the property. A focus on the issue of depletion of Komodo monitor prey species stocks has resulted in some success and the same efforts need to be focused on the issues of damaging fishing practices and impacts on other unique species contained within the property. 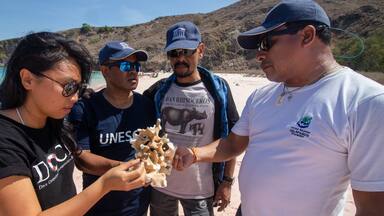 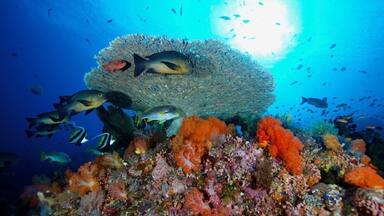