Situated in the valley of a small tributary of the Rio Grande, this adobe settlement – consisting of dwellings and ceremonial buildings – represents the culture of the Pueblo Indians of Arizona and New Mexico. 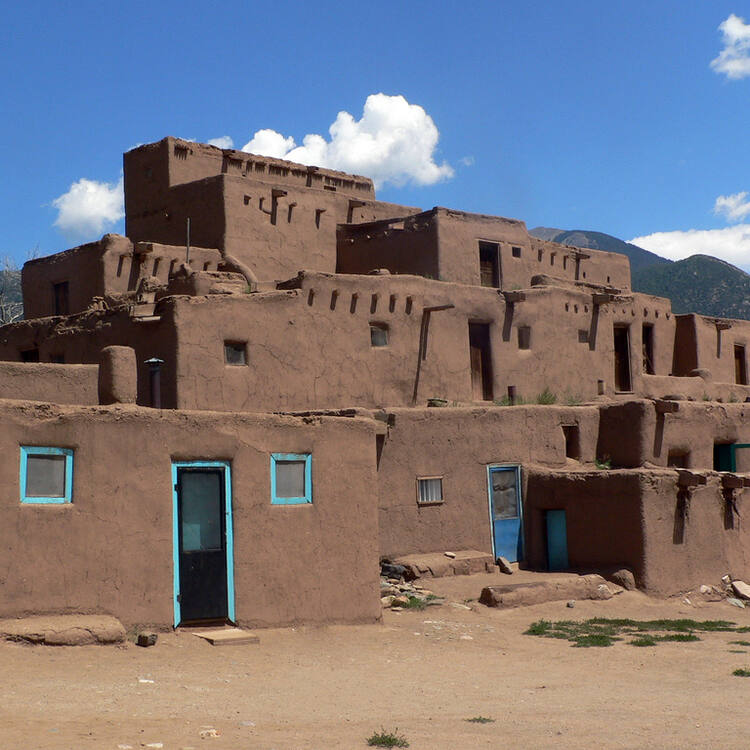 This Pueblo Indian settlement in northern New Mexico, consisting of ceremonial buildings and facilities, and multi-storey adobe dwellings built in terraced tiers, exemplifies the living culture of a group of present-day Pueblo Indian people at Taos Pueblo. As one of a series of settlements established in the late 13th and early 14th centuries in the valleys of the Rio Grande and its tributaries that have survived to the present day, Taos Pueblo represents a significant stage in the history of urban, community and cultural life and development in this region. Taos Pueblo has been continuously inhabited and is the largest of these Pueblos that still exist, with its North and South Houses rising to heights of five storeys. Taos Pueblo and the people of the Pueblo itself claim an aboriginal presence in the Taos Valley since time immemorial.

Taos Pueblo, whose culture and community are active and thriving, shows many similarities to settlement sites of the ancestral Pueblo people that are preserved in nearby places such Chaco Canyon and Mesa Verde. It is nevertheless unique to this region and not derived from Mesoamerican precedents. The property includes the walled village with two multi-storey adobe structures, seven kivas (underground ceremonial chambers), the ruins of a previous pueblo, four middens, a track for traditional foot-races, the ruins of the first church built in the 1600s and the present-day San Geronimo Catholic Church. The Taos mountains (Sangre de Cristo range of the Rocky Mountains) provide the setting for the Pueblo. Within these mountains is the 19,425-ha Taos Pueblo Blue Lake Wilderness Area, a resource of critical importance to the Pueblo’s living culture and agricultural sustainability. The Sacred Blue Lake, intrinsically linked to the Pueblo’s culture, is the source of a stream that flows through the settlement.

Criterion (iv): Taos Pueblo is a remarkable example of a traditional type of architectural ensemble from the pre-Hispanic period of the Americas unique to this region and one which, because of the living culture of its community, has successfully retained most of its traditional forms up to the present day.

Within the boundaries of Taos Pueblo are located all the elements necessary to understand and express the Outstanding Universal Value of the property, including the adobe-walled village with its important historic and prehistoric features inside and outside the walled area. The two main adobe complexes retain their traditional three-dimensional layout. Additions and some limited use of non-native materials have not fundamentally altered the visual impression of the Pueblo or its striking evidence of ancient building traditions. Traditional building customs, techniques and materials have resulted in harmonious construction throughout the walled precinct. The 19.01-ha property is of sufficient size to adequately ensure the complete representation of the features and processes that convey the property’s significance, and does not suffer from adverse effects of development and/or neglect. There is currently no buffer zone for the property.

Taos Pueblo is authentic in terms of its location and setting, forms and designs, materials and substance, uses and functions as well as spirit and feeling. The Pueblo has been continuously occupied and cared for by the traditional and culturally-based community. Adobe requires regular maintenance through periodic replastering, which is undertaken as needed by tribal members using traditional materials and methods. Some European-style framed doors and windows were introduced in the 20th century, but these remain limited in scale. The community maintains controls to protect its traditions, including the prohibition within the walled area of electrical power lines and piped water supply. An increasing number of Pueblo residents have homes outside the walled area; however, the old village still serves as the most important focus for intra-village interaction and cultural activities.

The known and potential threats to the authenticity of the property include the following: the growth of the nearby municipality of Taos, which places pressure on the Pueblo to modernize; economic conditions that cause tourism impacts; planned expansion of the existing Taos Regional Airport; and environmental stresses such as forest fires, droughts and floods.

Taos Pueblo is governed by the independent and autonomous Tribal Council, Governor and War Chief. Individual rooms are owned by tribal families but the structures are owned by the community as a whole and are managed as such by the Pueblo’s governing body. The Governor’s Office is responsible for the day-to-day management and protection of the property. The Pueblo holds the status of a limited-sovereign nation within the boundaries of the United States of America. The site is part of the original Spanish Land Grant (within the Pueblo’s aboriginal lands), which is held in trust by the federal government for the benefit of the Pueblo. The federal government has a trust responsibility for the protection and preservation of the Pueblo as a World Heritage Site. This responsibility is fulfilled with respect for its status as a self-governed community. The Pueblo’s designation as a National Historic Landmark (1960) requires that any federal government undertakings that may affect or impact the property must be carefully considered, and the federal agencies must consult with the Pueblo before initiating any action.

The Pueblo has always had a comprehensive unwritten preservation strategy that is carried out by tribal members, with scrupulous respect for traditional materials and techniques. These traditions and practices have protected Taos Pueblo’s structures for centuries through an active monitoring program by the Pueblo’s traditional government and decision-making process. This ensures that the living culture and associated historic structures and landscapes are maintained and functional. The National Park Service is providing assistance to the Pueblo to develop a written management and preservation plan as well. The Pueblo attracts large numbers of visitors and has a formal tourism program which plans to establish a visitor centre. The Pueblo is closed to visitors on certain ceremonial occasions, and some areas are not accessible to visitors.

Sustaining the Outstanding Universal Value of the property over time will require protecting it from the continuing challenges of adverse effects, which include environmental stresses such as erosion from rain and snow, forest fires, droughts and floods. It will also require ensuring that any developments within or near Taos Pueblo do not have negative impacts on the property’s values, authenticity and integrity.