The oasis of Bahla owes its prosperity to the Banu Nebhan, the dominant tribe in the area from the 12th to the end of the 15th century. The ruins of the immense fort, with its walls and towers of unbaked brick and its stone foundations, is a remarkable example of this type of fortification and attests to the power of the Banu Nebhan. 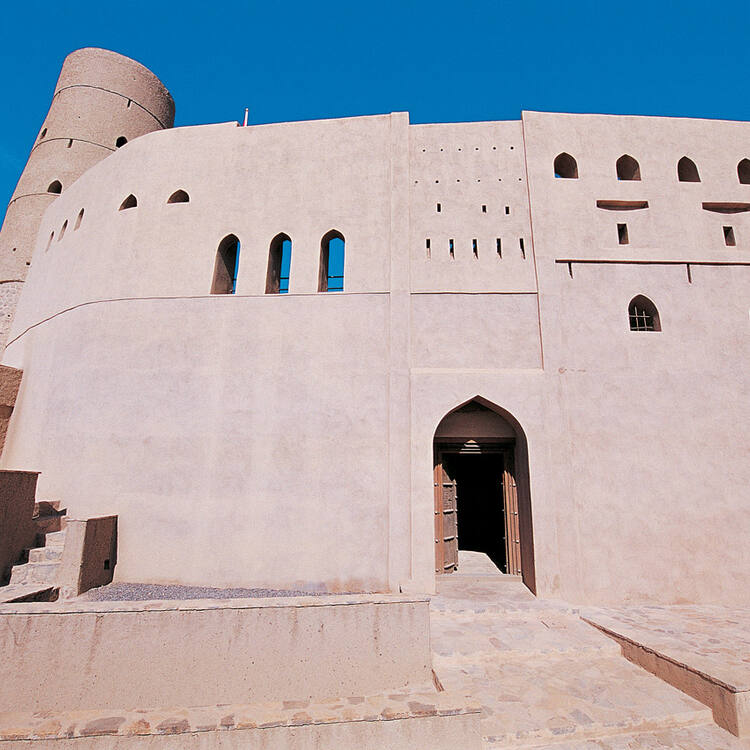 The immense, ruined Bahla Fort, with its walls and towers of mud brick on stone foundations and the adjacent Friday Mosque with its decoratively sculpted prayer niche (mihrab) dominate the surrounding mud brick settlement and palm grove. The fort and settlement, a mud-walled oasis in the Omani desert, owed its prosperity to the Banu Nebhan tribe (Nabahina), who dominated the central Omani region and made Bahla their capital from the 12th to the end of the 15th century. From there they established relationships with other tribal groups of the interior. Bahla was the centre of Ibadism (a branch of Islam), on which the ancient Omani Imamates were based and whose influence can be traced across Arabia, Africa and beyond.

The extensive wall (sur) with sentry walk and watchtowers enclosing the labyrinth of mud brick dwellings and cultivatable land has several gateways. The oasis is watered by the falaj system of wells and underground channels bringing groundwater from distant springs, and by management of the seasonal flow of water.

Bahla is an outstanding example of a fortified oasis settlement of the medieval Islamic period, exhibiting the water engineering skill of the early inhabitants for agricultural and domestic purposes. The pre-gunpowder style fort with rounded towers and castellated parapets, together with the perimeter sur of stone and mud brick technology demonstrates the status and influence of the ruling elite.

The remaining mud brick family compounds of traditional vernacular houses (harats) including al-Aqr, al-Ghuzeili, al-Hawulya and the associated mosques, audience halls (sablas), bath houses, together with the dwellings of the fort guards (askari) demonstrate a distinctive settlement pattern related to the location of the falaj. The importance of the settlement is enhanced by the Friday mosque with its highly ornate mihrab and the remains of the old, semi-covered market (souq), comprising a complex of single-storey shops fronting onto narrow lanes, the whole enclosed by an outer wall. The location of the souq placed it within easy surveillance from the fort on its rocky outcrop nearby. Remains of carved and decoratively incised timber doors, shelves and window screens testify to a rich, thriving craft tradition.

Criterion (iv): The Bahla Fort and oasis settlement with its perimeter fortification are an outstanding example of a type of defensive architectural ensemble that enabled dominant tribes to achieve prosperity in Oman and the Arabian Peninsula during the late medieval period.

At the time of inscription, it was noted that the Bahla Fort and adjacent Friday Mosque were inseparable from the small oasis town surrounding it and the boundary therefore follows the line of the wall (sur) enclosing the whole oasis settlement. A road cuts across the property.

The principal constituents of Bahla's architectural ensemble have survived and together they form an integral and largely complete historic walled oasis settlement and major defensive complex. Comprising mostly earthen structures however, they are vulnerable to decay and inadequate site drainage and, in the case of the souq, are vulnerable to reconstruction in modern materials.

The falaj system and water course on which the settlement depends, together with the historic routes linking the settlement to other towns in the interior, extend far beyond its boundary. Despite some urban development in the late 20th century and early 21st century, Bahla remains prominent in the desert landscape. Its continued prominence within the landscape and the visual approaches are vulnerable to community development and tourism requirements. Maintaining the surveillance role of the fort in relation to the souq, the surrounding settlement and the gateways will similarly depend on careful management of development within the property.

At the time of inscription, the fort was dilapidated and decaying rapidly after each rainy season. It was put on the List of World Heritage in Danger in 1988. Consolidation works to some sections of the fort including Bayt al-Jabal, the entrance hall (sabah), and north-west and south-west walls using inappropriate materials were carried out in the early 1990s, and an audience hall (sabla) in the courtyard was demolished in 1992. From 1995, following training and advice on earthen structures, conservation using only earthen-based materials has included courtyard drainage, new roofs and consolidation of collapsing walls and towers including to the citadel (qasaba), courtyard mosque, Bayt al-Jabal, Bayt al-Hadith and horse stalls, and capping of tops of ruined walls to impede further collapse. The sabla was reconstructed in 1999 in the courtyard of the fort. Accurate records have been kept of the work and full documentation of the fort has since been carried out including a photogrammetric survey.

The form, design and materials that convey the Outstanding Universal Value can be said to have largely retained their authenticity. The property was taken off the List of World Heritage in Danger in 2004.

Bahla remains a thriving settlement. However the authenticity is vulnerable to the abandonment of traditional vernacular houses within the harats. The souq is also vulnerable to lack of conservation and maintenance and changes in materials and methods of construction.

The property of Bahla Fort and Oasis is protected administratively and legally by the Omani Law for National Heritage Protection (1980). The Fort and its environs are controlled by the Ministry of Heritage and Culture in Muscat, which has a regional office in the Dakhliyeh region and a site office at Bahla.

The site has a Management Plan dating from March 2005, focused on the long-term care, conservation and use of the site's historic buildings, structures and spatial form. The plan also recognises the importance of maintaining the site as an integral whole and the need to manage modern uses and development in order to preserve the integrity of the architectural assemblage and its prominence within its setting.

Several of the actions set out in the Management Plan have been taken forward and implemented, including conservation of the Friday mosque, the qasaba, the sur and gateways, development of guidelines for rehabilitation of the harats, diversion of through traffic, electrification of the fort and installation of a site museum in Bayt al-Hadith within the fort.

The Management Plan is currently undergoing review and will be updated in 2009/2010 in order to be officially adopted. The reviewed and updated Management Plan will form the basis for the long-term management of the property.