This exceptional system of limestone caves comprises collapsed dolines, some 6 km of underground passages with a total depth of more than 200 m, many waterfalls and one of the largest known underground chambers. The site, located in the Kras region (literally meaning Karst), is one of the most famous in the world for the study of karstic phenomena. 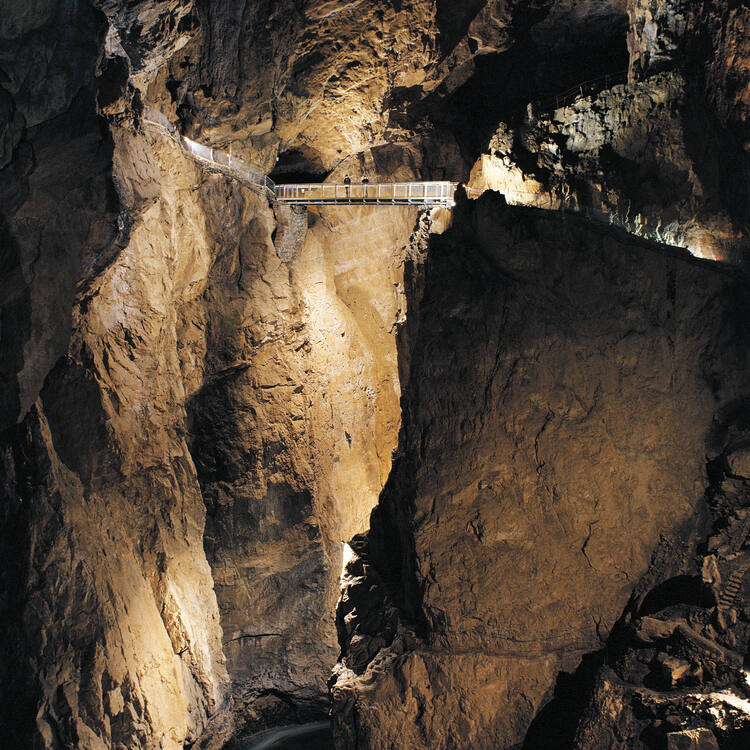 Škocjan Caves Regional Park is situated in the Kras Plateau of South-West Slovenia. The protected area of 413 ha conserves an exceptional limestone cave system which comprises one of the world's largest known underground river canyons, that was cut into the limestone bedrock by the Reka River. Along its course, the river suddenly disappears into the karst underground, before passing through a vast and picturesque channel of up to 150 meters in height and more than 120 meters in width, often in the form of dramatically roaring rapids and waterfalls. The canyon's most spectacular physical expression is the enormous Martel Chamber, which exceeds two million cubic meters in volume. Like the canyon, the vast underground halls and chambers of the cave system expose stunning variations of limestone bedrock and secondary cave formations. It is no coincidence that karst research has its origin in this very part of Slovenia, which is scientifically referred to as "Classical Karst". The term "karst" itself is derived from the name of the plateau, and is one of many technical terms commonly used in geology and speleology that have their origin in the region. Beyond its almost supernatural visual appeal, its scale and scientific importance, the regional park is also home to noteworthy species and species assemblages, which thrive in the distinct world of the underground environment and in the so-called collapsed dolines, a form of karst sinkholes. The caves support many endemic and endangered species, including the Cave Salamander along with many invertebrates and crustaceans. The very particular environmental conditions of the collapsed dolines provide a habitat for rare and threatened flora and fauna. Furthermore, ongoing archaeological studies have been revealing ever more details of a very long history of human occupation since prehistoric times. There is strong evidence that our ancestors appreciated the area as a place for settlements. Archaeological research has also disclosed that the area was historically used as a burial ground as well as for rituals.

Criterion (vii): The Škocjan cave system and its surroundings are eminent and well-conserved manifestations of Karst topography. It reveals a broad range of karst features with its exceptional scale and aesthetic quality. Some outstanding landscape highlights include the vast, roughly two-kilometre long underground canyon, up to some 150 metres high and in places more than 120 metres wide. An underground torrent runs through it along series of cascades, turning it into a major visual and auditory spectacle. Higher up in the drier ceilings and walls of the canyon, limestone deposition from dripping water has been shaping astonishing stalagmites and stalactites, such as the so-called Giants in Velika Dvorana (or "Great Chamber"). The magnificent rimstone pools in Dvorana Ponvic (or "Chamber of Rimstone Pools") are equally impressive manifestations of calcite deposits. The famous pools have been attracting scientists and artists ever since their formal discovery in 1888, and their representations came to epitomize the otherworldly beauty of the Škocjan Caves. The main channel of the celebrated underground river resurfaces in two picturesque collapsed dolines named Velika and Mala. The breath-taking view of these two collapsed dolines is depicted in the drawings of the pioneering explorer Valvasor that date back as early as 1689, and has never ceased to fascinate visitors, artists and scientists.

Criterion (viii): The Škocjan Caves and their surroundings are the major localities for karst topography and are the place where fundamental terms such as "karst" and "doline", have their origin. This is not only a strong indication of the property's importance for science, but more specifically of its importance for the history of earth sciences. An impressive array of exceptional karst manifestations, the result of past and present geological, geomorphological, speleological and hydrological processes, are clearly at display for scientists and visitors alike within a relatively small area. The heart of the site, the main cave system with the underground stretches of the Reka River, has been formed in a thick layer of cretaceous limestone. The constantly dynamic system is an outstanding textbook example of contact Karst with well-developed features, such as a blind valley, collapsed dolines, openings, chasms and caves. Remarkably, this geological diversity supports an equally fascinating biological diversity which has important implications for land and water management.

Compared to many other protected areas of global significance, Škocjan Caves Regional Park is neither large nor does it enjoy a particularly strict protection status. Set in a rural landscape with permanent human presence since time immemorial, the Škocjan Caves are an encouraging example of how exceptional nature conservation values and longstanding and ongoing human presence are not necessarily mutually exclusive. The boundaries of the regional park and the World Heritage property, respectively encompass the most striking features of the karst topography, and therefore strongly contribute to the conservation of these key natural values. The landscape and parts of the cave system have been subject to some construction and other forms of human intervention. Major construction took place after the discovery of the caves in order to facilitate research and public visitation, in the more easily accessible areas. Infrastructure includes walkways, bridges and electric lighting. Through restrictions, careful design and use of materials, major damage to the overall integrity could be and is being prevented. The World Heritage property is surrounded by the Karst Biosphere Reserve, of which Škocjan Caves Regional Park is the core zone. The buffer of the Karst Biosphere Reserve increases the options and chances to maintain the integrity of the broader landscape of which the property is visually, geologically and ecologically, a small, but integral part.

Discovered in 1815, the protected area in its current extension was only established in 1990, following earlier designation of roughly half the area as a Natural Monument. In an explicit effort to study and manage the outstanding geological and biological diversity, the paleontological and archaeological heritage, as well as the ethnological and architectural characteristics of the cultural landscape in an integrated manner, the Škocjan Caves Regional Park (Zakon o Regijskem parku Škocjanske jame) was published in the 1996 gazette. The caves are publicly owned, whereas the surface land is divided into public and private parcels. The public management authority became operational one year later, eventually introducing management planning. In 1999, large parts of the site also became a Wetland of International Importance under the Ramsar Convention, in recognition of the outstanding value of these underground wetlands. A much larger landscape unit was designated as the Karst Biosphere Reserve under UNESCO's Man and the Biosphere (MAB) Programme in 2004. Three Sites of Community Importance under the European Union's Natura 2000 overlap with most of Škocjan Caves Regional Park.

Three small villages, Škocjan, Betanja and Matavun, are located within the regional park, implying valuable local knowledge and a need to fully involve local residents in the management and benefit-sharing of the property. Other basic management needs encompass communication and public awareness activities. Scientific research in many fields, including geology, is an essential part of the conservation approach whilst also providing information for site management. Tourism and recreational activities require careful planning, control and impact monitoring in light of the limited overall size of the protected area, the localized concentration of access and the fragility of some of its attractions. As is common in protected area management, threats do not all stem from within the regional park, thus suggesting the need to take into account the broader landscape. The Reka River epitomizes this permanent challenge. Its water quality has been varying as a result of industrial pollution, sewage and agricultural waste among other external factors, strongly impacting on aquatic life. Likewise, past debates about possible impacts of proposed wind turbines on the nearby Vremscica Plateau serve as a reminder that conservation management is required to respond to inevitable change, to defend its position and to help balance competing demands. 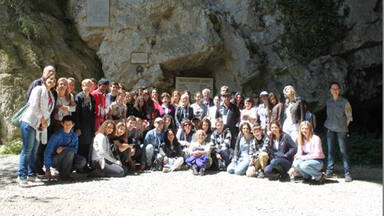 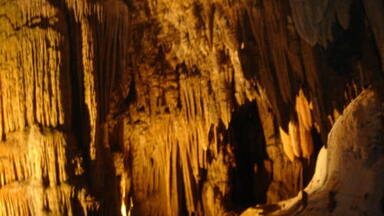 Conference: 40th Anniversary of the Convention on the Protection of the World Cultural and Natural Heritage - The Meaning of the Convention Today
9 Oct 2012 - 9 Oct 2012
Bikeabout To Launch Circum-Mediterranean Tour Of World Heritage Sites
24 Sep 1997 - 30 Jun 1998