Built in the early 8th century, this exceptionally well-preserved desert castle was both a fortress with a garrison and a residence of the Umayyad caliphs. The most outstanding features of this small pleasure palace are the reception hall and the hammam, both richly decorated with figurative murals that reflect the secular art of the time. 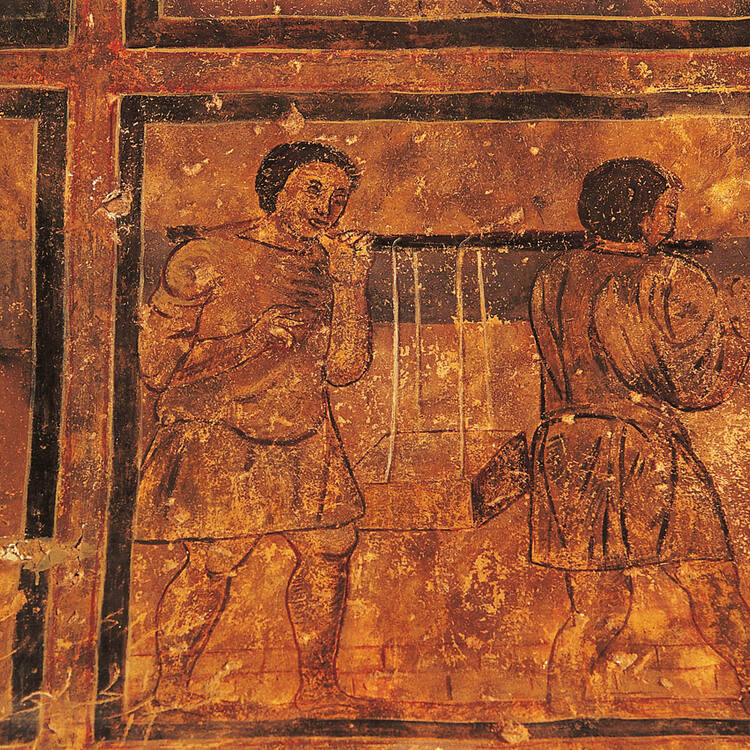 Built in the early 8th century beside the Wadi Butum, a seasonal watercourse, this desert establishment was both a fortress with a garrison and a residence/pleasure palace of the Umayyad caliphate. The exceptionally well-preserved, small pleasure palace comprises a reception hall and hammam (a bath complex with changing room, warm and hot rooms), all richly decorated with figurative murals that reflect the secular art of the time.

The extensive fresco paintings of the bath building and reception hall are unique for Islamic architecture of the Umayyad period. The wall paintings show influences from classical pagan themes, Byzantine style portraits and hunting scenes, depictions of animals and birds, and are accompanied by inscriptions in Greek and Arabic. The representation of the zodiac on the domed ceiling of the caldarium (hot room) is one of the earliest known, surviving portrayals of a map of the heavens on a dome.

The desert establishment, of which this pleasure palace forms part, was one of several created in the semi-arid area east of Amman for the purpose of interacting with the tribal region of the Wadi Butum. As such, Quseir Amra is an outstanding example of a particular type of architectural ensemble which relates specifically to the administrative strategy of the first Islamic caliphate.

Criterion (i): The Quseir Amra paintings constitute a unique artistic achievement in the Umayyad Period. The extensive fresco paintings of the reception hall and bath building, in creating a place of relaxation for the Prince away from earthly cares, provides new insight to early Islamic art and its derivation from classical and Byzantine precedents. The zodiac dome, human portraits and depictions of animals and birds in the hunting scenes are found only in this early period of Islamic art.

Criterion (iii): Quseir Amra bears exceptional testimony to the Umayyad civilization which was imbued with a pre-Islamic secular culture and whose austere religious environment left little trace in the visual arts.

Criterion (iv): Together with the remains of the fort/garrison buildings several hundred metres to the north and traces of agricultural water catchment works, the fresco-painted bath building with its reception hall and adjacent well, tank and water-lifting hydraulic system, drainage pipes and cesspool represent an outstanding example of an Umayyad desert establishment.

In view of the fact that the relief decorations of the monumental frontal façade of Qasr el Mushatta were sent to the Berlin Museum and that the ruins of Qasr al Khayr al-Sharqui and Qasr al-Khayr al-Gharbi contain few decorative elements, Qusair Amra remains, together with Qasr Hisham and its mosaics, the best preserved of the decorated Umayyad palaces and castles in Jordan and Syria.

The most significant elements of the property comprising the bath building and reception hall with their frescos remain intact.

The monument is vulnerable to erosion due to desert sandstorms and seasonal flooding of the water course on which it is located. A tree-planting project to the east and north of the property was aimed at reducing the impact of the arid desert, and a flood mitigation project has involved the construction of a diversion dyke to the west of the property. A huge modern reservoir was constructed to collect the flood and use the water to irrigate the forested area. These measures have been successful.

The location and condition of the building renders it subject to moisture penetration, which in turn is affecting the integrity of the wall paintings, causing deposition of salts and detachment of plaster at the base of the wall. The wall paintings are vulnerable to seasonal humidity and condensation due to increased numbers of visitors.

The paintings are also vulnerable due to the ageing of some of the products used in a 1970s restoration project, the accumulation of new dirt, graffiti, and deposits produced by birds and insects.

The setting of the monument, once a peaceful haunt of gazelles and other wildlife that came to the seasonal pools in the wadi bed shaded by patches of Butut (terebinth) trees that gave the watercourse its name, is now subject to noise and pollution from the highway constructed about 150 metres to the east.

The Outstanding Universal Value of the property is conveyed by the bath building and reception hall and their wall paintings and remnant mosaic floors. It is also conveyed by the context of the building which includes the adjacent well, tank and water-lifting system, the fort/garrison to the north, the remnant agricultural water collection structures and the desert environment with its seasonal watercourses.

These attributes require ongoing conservation and careful management of the requirements of increased tourism. The paintings have been subject to restoration programs in the 1970s and 1990s and a further program is envisaged. The setting now includes a visitor centre on the northern edge of the buffer zone and a solar-powered water pumping station 400 metres to the north-east.

The property is a protected area under the Antiquities Law of 1935 Article 8 and the provisional law of 1976.

There is currently no management plan but there is a management operation. The site is managed by the Ministry of Tourism and Antiquities through its local office at Zara. Staff from the Department of Antiquities in Amman including an archaeologist, an architect, a foreman and four unskilled workmen carries out regular monitoring services and minor repairs and maintenance. The property is totally fenced and security is maintained by four permanent guards.

The Department of Antiquities is currently in discussion with the authorized departments regarding land cadastre surveying for the establishment of an expanded protection zone around the property for up to approximately 2,000 dunums (two million square metres).

Regulations will be developed in cooperation with the local municipality and Ministry of Agriculture to control future development and tree-planting.