The List Port, Fortresses and Group of Monuments, ...
Print

Situated in a bay in the Caribbean Sea, Cartagena has the most extensive fortifications in South America. A system of zones divides the city into three neighbourhoods: San Pedro, with the cathedral and many Andalusian-style palaces; San Diego, where merchants and the middle class lived; and Gethsemani, the 'popular quarter'. 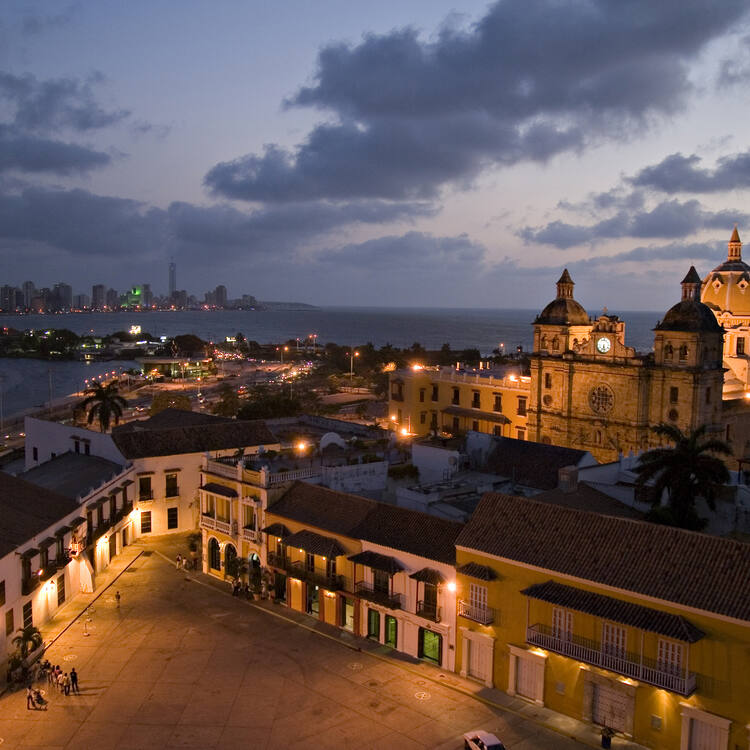 Port, Fortresses and Group of Monuments, Cartagena © OUR PLACE The World Heritage Collection

Situated on the northern coast of Colombia on a sheltered bay facing the Caribbean Sea, the city of Cartagena de Indias boasts the most extensive and one of the most complete systems of military fortifications in South America. Due to the city’s strategic location, this eminent example of the military architecture of the 16th, 17th and 18th centuries was also one of the most important ports of the Caribbean. The port of Cartagena – together with Havana and San Juan, Puerto Rico – was an essential link in the route of the West Indies and thus an important chapter in the history of world exploration and the great commercial maritime routes. On the narrow streets of the colonial walled city can be found civil, religious and residential monuments of beauty and consequence.

Cartagena was for several centuries a focal point of confrontation among the principal European powers vying for control of the “New World.” Defensive fortifications were built by the Spanish in 1586 and were strengthened and extended to their current dimensions in the 18th century, taking full advantage of the natural defences offered by the numerous bayside channels and passes. The initial system of fortifications included the urban enclosure wall, the bastioned harbour of San Matías at the entry to the pass of Bocagrande, and the tower of San Felipe del Boquerón. All of the harbour’s natural passes were eventually dominated by fortresses: San Luis and San José, San Fernando, San Rafael and Santa Bárbara at Bocachica (the southwest pass); Santa Cruz, San Juan de Manzanillo and San Sebastián de Pastelillo around the interior of the bay; and the formidable Castillo San Felipe de Barajas on the rocky crag that dominates the city to the east and protects access to the isthmus of Cabrero. Within the protective security of the city’s defensive walls are the historic centre’s three neighbourhoods: Centro, the location of the Cathedral of Cartagena, the Convent of San Pedro Claver, the Palace of the Inquisition, the Government Palace and many fine residences of the wealthy; San Diego (or Santo Toribio), where merchants and craftsmen of the middle class lived; and Getsemaní, the suburban quarter once inhabited by the artisans and slaves who fuelled much of the economic activity of the city.

Criterion (iv) : Cartagena is an eminent example of the military architecture of the 16th, 17th, and 18th centuries, the most extensive of the New World and one of the most complete.

Criterion (vi) : Cartagena, together with Havana and San Juan, Puerto Rico (already inscribed in the World Heritage List), was an essential link in the route of the West Indies. The property fits within the general theme of world exploration and the great commercial maritime routes.

Within the boundaries of the Port, Fortresses and Group of Monuments, Cartagena, are located all the buildings, structures and spaces necessary to express its Outstanding Universal Value. The 192.32-ha property is of sufficient size to adequately ensure the complete representation of the features and processes that convey the property’s significance, and it does not suffer from adverse effects of development and/or neglect.

The components that make up the Port, Fortifications and Group of Monuments, Cartagena, are authentic in terms of location and setting, forms and designs, and materials and substance. The property constitutes an exceptional example of Spanish military architecture of the 16th, 17th and 18th centuries, and the existing fortification works remain authentic examples of some of the most important military engineers of this period, including Juan Bautista (Giovanni Battista) Antonelli, Juan de Herrera y Sotomayor, Antonio de Arévalo, Ignacio Sala and Juan Bautista MacEvan.

Several changes have occurred over time to the port and monuments of this living city and its surroundings, especially related to development and increasing tourism. Renovation and infrastructure projects have been developed or are in the process of development in the city, among them a new urban transportation system known as “Transcaribe.” These changes have the potential to threaten the property’s authenticity. Changes in uses because of the impact of tourism could also have a negative impact on the authenticity of functions and of the spirit of the place. Dredging works in Bocachica channel constitute a risk factor for the fortifications.

The ownership of the Port, Fortresses and Group of Monuments, Cartagena, is shared among private individuals, institutions, the Roman Catholic Church and national and local government authorities. The historic centre was declared a National Monument under the provisions of Law No. 163 of 1959. Other legal instruments for the protection of the property include Law No. 32 of 1924 (conservation and enhancement of the monuments of Cartagena); Law No. 11 of 1932 (Commission on Historic Monuments and Tourism); Law No. 5 of 1940 (Law on National Monuments); Law No. 49 of 1945; Decree 264 of 1963 (which regulates Law No. 163 of 1959); Law No. 397 of 1999 (General Law on Culture); and Law No. 1185 of 2008 (interventions require prior authorization of the Ministry of Culture). At the local level, Decree 977 of 2001 approved the Plan of Territorial Management (Plan de Ordenamiento Territorial, POT), which has a section dedicated to the historic centre. Organizations concerned with the management of the property include, at the national level, the Ministry of Culture, the Direction of Heritage, the Group on Protection of Properties of Cultural Interest, and the National Monuments Council; and, at the local level, the Secretary of Planning (District Government of Cartagena), the Institute on Heritage and Culture of Cartagena (IPCC), the Society on Public Improvement, and the Corporation of the Historic Centre of Cartagena. At the local level there is a certain overlapping of functions between official and non-governmental agencies, which sometimes results in a rather complicated system of management. There is a 304.09-ha buffer zone (“Zone of Influence”).

Sustaining the Outstanding Universal Value of the property over time will require completing, approving, adopting and implementing the Special Protection and Management Plan (PEMP) of Cartagena’s Historic Centre; completing the delimitation of all elements of the fortification system; undertaking the identified priority measures for the conservation of the ensemble of walls and the fortified city; defining and implementing a systematic plan of interventions and monitoring for the defensive walls and neighbouring fortifications; giving the unique natural setting of the bay of Cartagena the best protection possible, and creating a broad area where ordinances would limit the height of contemporary construction; strengthening residential and tourist-related activities, changing inappropriate use in buildings and developing strategic projects in the historic centre and its “Zone of Influence;” and ensuring that interventions, including those related to the Bocachica channel dredging and “Transcaribe” projects, do not compromise the Outstanding Universal Value, authenticity and integrity of the property. A clarification of missions and functions and a more articulated work among the diverse social actors (official and non-governmental groups) would be desirable, to enhance the dialogue and common work among them. 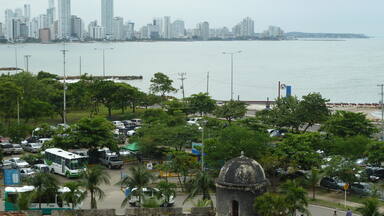