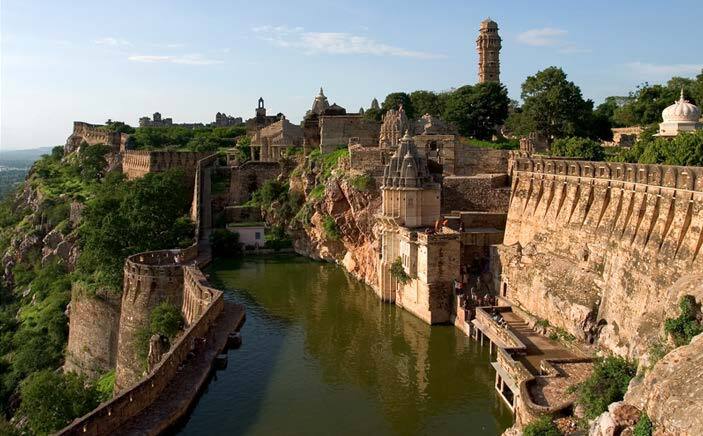 Within the State of Rajasthan, six extensive and majestic hill forts together reflect the elaborate, fortified seats of power of Rajput princely states that flourished between the 8th and 18th centuries and their relative political independence.

The extensive fortifications up to 20 kilometres in circumference optimized various kinds of hill terrain, specifically the river at Gagron, the dense forests at Ranthambore, and the desert at Jaisalmer, and exhibit an important phase in the development of an architectural typology based on established “traditional Indian principles”. The vocabulary of architectural forms and of ornaments shares much common ground with other regional styles, such as Sultanate and Mughal architecture. Rajput style was not ‘unique’, but the particular manner in which Rajput architecture was eclectic (drawing inspiration from antecedents and neighbours) together with its degree of influence over later regional styles (such as Maratha architecture) do make it distinctive.

Within the defensive walls of the forts, the architecture of palaces and other buildings reflects their role as centres of courtly culture, and places of patronage for learning arts and music. As well as housing for the court and military guard, most had extensive urban settlements within their walls, some of which have persisted to the present day. And some also had mercantile centres as the forts were centres of production and of distribution and trade that formed the basis of their wealth. Most of the forts had temples or sacred buildings, some pre-dating the fortifications and outliving the Rajput kingdoms, and many of these remarkable collections of buildings still attract followers. Collectively the forts contain extensive water harvesting structures, many of which are still in use.

As a former capital of the Sisodia clan and the target of three famous historical sieges, Chittorgarh is strongly associated with Rajput history and folk lore. Furthermore the sheer number and variety of architectural remains of early date (ranging from the 8th to the 16th centuries) mark it as an exceptional fort in its scale and monumentality comparable to very few other Indian forts.  Kumbhalgarh was constructed in a single process and (apart from the palace of Fateh Singh, added later) retains its architectural coherence. Its design is attributed to an architect known by name –Mandan – who was also an author and theorist at the court of Rana Kumbha in Chittorgarh. This combination of factors is highly exceptional. Situated in the middle of forest, Ranthambore is an established example of forest hill fort and in addition, the remains of the palace of Hammir are among the oldest surviving structures of an Indian palace. Gagron is an exemplar of a river-protected fort. In addition its strategic location in a pass in the hills reflects it control of trade routes. Amber Palace is representative of a key phase (17th century) in the development of a common Rajput-Mughal court style, embodied in the buildings and gardens added to Amber by Mirza Raja Jai Singh I.  Jaisalmer is an example a hill fort in desert terrain. The extensive township contained within it from the outset, still inhabited today, and the group of Jain temples, make it an important (and in some respects even unique) example of a sacred and secular (urban) fort.

Criterion (ii): The Hill Forts of Rajasthan exhibit an important interchange of Princely Rajput ideologies in fort planning, art and architecture from the early medieval to late medieval period, within the varied physiographic and cultural zones of Rajasthan. Although Rajput architecture shared much common ground with other regional styles, such as Sultanate and Mughal architecture, it was eclectic, drawing inspiration from antecedents and neighbours, and had a degree of influence over later regional styles such as Maratha architecture.

Criterion (iii): The series of six massive hill forts are architectural manifestations of Rajput valour, bravery, feudalism and cultural traditions, documented in several historic texts and paintings of the medieval and late medieval period in India. Their elaborate fortifications, built to protect not only garrisons for defence but also palatial buildings, temples, and urban centres, and their distinctive Rajput architecture, are an exceptional testimony to the cultural traditions of the ruling Rajput clans and to their patronage of religion, arts and literature in the region of Rajasthan over several centuries.

As a series, the six components together form a complete and coherent group that amply demonstrate the attributes of Outstanding Universal Value, without depending on future additions to the series.

When considered as individual components, Chittorgarh and Ranthambore include all relevant elements to present their local, fort-related significances. However, ICOMOS is concerned about the surrounding development and industrial activities around Chittorgarh Fort, in particular the pollution and landscape impact of the nearby quarries, cement factories and zinc smelting plants, which, if continued or even expanded, have the potential to adversely affect the property.

The wider setting of Chittorgarh is vulnerable to urban development as well as industrial and mining activities that cause notable air pollution.  At Jaisalmer the wider setting and views to and from the fort could be vulnerable to certain types of urban development in the surrounding town. While at Gagron the setting could be under threat from unregulated construction.

Within the forts, there are acknowledged development pressures derived from continued encroachment and enlargement of residential communities. The stability of the overall hill on which Jaisalmer rests is vulnerable to water seepage as a result of the lack of adequate infrastructure.

As a series, the six sites have the capacity to demonstrate all the outstanding facets of Rajput forts between the 8th and 18th centuries. Each of the sites is necessary for the series.

For the individual forts, although the structures at each of the sites adequately convey their value, some are vulnerable. The original exterior plaster at Amber Fort and Gagron Fort has been replaced, which has caused a loss of historic material and patina. At Chittorgarh and Kumbhalgarh Forts, there are structures in a state of progressive decay or collapse, which are vulnerable to losing their authenticity in material, substance, workmanship and design. At Jaisalmer within the urban area, individual buildings are in need of improved conservation approaches.

Chittorgarh, Kumbhalgarh, Ranthambore and Jaisalmer Forts are protected as Monuments of National Importance of India under the Ancient and Historical Monuments and Archaeological Sites and Remains (Declaration of National Importance) Act of 1951 (No. LXXI of 1951 (AMASR)) and the AMASR Amendment of 2010. They were listed in 1951 (Kumbhalgarh, Ranthambore and Jaisalmer) and in 1956 (Chittorgarh) respectively. The 1951 national legislation provides unlimited protection to the monuments designated in its framework and the 2010 amendment establishes a 200 metre protection zone around the area of the designated Monuments of National Importance.

Gagron and Amber Forts are designated as State Protected Monuments of Rajasthan under the Rajasthan Monuments, Archaeological Sites and Antiquities Act of 1968. They were both listed in the very year the act was adopted. The 1968 Act stipulates that no person, including the owner of the property, can carry out any construction, restoration or excavation work, unless permission has been granted by the responsible state authorities. In the case of Amber Palace an additional notification for the protection of a 50 metre buffer zone around the property has been issued. All sites have buffer zones designated, but there is a need for clearer planning policies for these in order to regulate development.

The overall management of the six properties is steered by the State Level Apex Advisory Committee, which was established through Order A&C/2011/3949 on 11 of May 2011. It is chaired by the Chief Secretary of Rajasthan and comprises members of the concerned ministries, namely Environment & Forests, Urban Development and Housing, Tourism, Art, Literature & Culture, Energy and various representatives of the heritage sector including the ASI. The Apex Advisory Committee meets on a quarterly basis and is designed to constitute the overall management framework of the serial property, guide the local management of the six serial components, coordinate cross-cutting initiatives, share research and documentation, share conservation and management practices and address the requirements of common interpretative resources.

To implement the recommendations of the Apex Advisory Committee, the Amber Development and Management Authority, acts as an overarching authority for management implementation. This was legalized through notification by the Chief Secretary of the Government of Rajasthan dated 14 October 2011.

There are Management Plans designed to cover the period 2011 to 2015 for five of the six sites. For Jaisalmer, the Management Plan for the property along with sub-plans including visitor management, risk preparedness, and livelihood generation for the local population, will be completed by end of 2013. There is a need for policy statements in the Plans to reference Outstanding Universal Value and for more detailed action plans to be produced for the implementation of the management policies, as well as for indicators for management quality assurance during the implementation processes. For the first revision of the Plans, it would be desirable to provide an over-arching volume for the whole series that sets out agreed approaches.

To reverse the vulnerabilities of certain individual structures within the forts, there is a need for short-term conservation actions. For Jaisalmer, there is a need to ensure the major conservation project for infrastructure and conservation of individual buildings is delivered according to the agreed timescale. Conservation of the extremely extensive fortifications and ensembles of palaces, temples and other buildings will call for extensive skills and resources. A capacity building strategy to raise awareness of the importance and value of these skills, as part of an approach to livelihood generation, could be considered.

In order to ensure a clear understanding of how each of the forts contributes to the series as a whole, there is a need for improved interpretation as part of an interpretation strategy for the overall series.