The List Central Zone of the Town of Angra do Heroismo ...
Print

Situated on one of the islands in the Azores archipelago, this was an obligatory port of call from the 15th century until the advent of the steamship in the 19th century. The 400-year-old San Sebastião and San João Baptista fortifications are unique examples of military architecture. Damaged by an earthquake in 1980, Angra is now being restored. 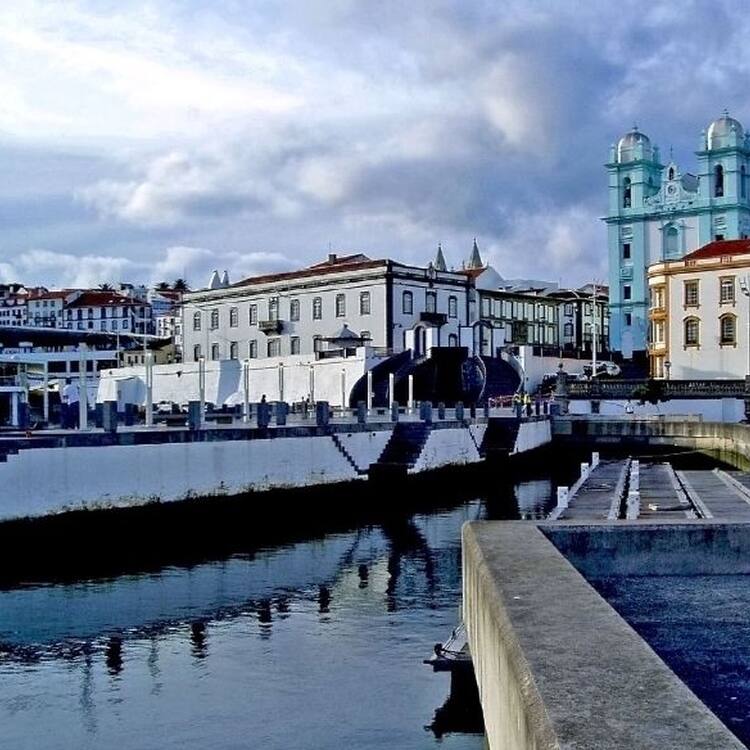 Situated on the mid-Atlantic island of Terceira within the Portuguese Autonomous Region of the Azores, Angra do Heroísmo was an obligatory port of call for the fleets of equatorial Africa and of the East and West Indies routes during their voyages to and from Europe from the 15th century until the advent of steamships in the 19th century. The port of Angra is also the eminent example of a creation linked to the maritime world: It is directly and tangibly associated with a development of a universal historic significance, the maritime exploration that allowed exchanges between the world’s great civilizations.

Angra do Heroísmo’s port comprises two natural basins protected by a series of hills, being a distinctive example of the adaptation of an urban model to particular climatic conditions: the gridiron plan typically used in new cities was skewed to take into account the prevailing winds. It has been conjectured, and not without reason, that this choice was imposed by the navigators and their cartographers. An extensive defensive system was installed following the town’s foundation. The 400-year-old São Sebastião and São João Baptista fortifications are notable examples of this military architecture. Angra was officially raised to the status of city on 21 August 1534; during the same year, it became the seat of the Archbishop of the Azores. This religious function contributed to the development of the monumental character of the city’s central zone, where the cathedral of Santíssimo Salvador da Sé, the churches of the Misericórdia and Espírito Santo, and the convents of the Franciscans and the Jesuits were all constructed in the Baroque style. Even following a devastating earthquake on 1 January 1980, the central zone of the town of Angra do Heroísmo has preserved the better part of its monumental heritage and its original vernacular architecture, and remains a homogenous urban ensemble.

Criterion (iv): Set in the mid-Atlantic, the port of Angra, obligatory port-of-call for fleets from Africa and the Indies, is an outstanding example of a creation linked to the maritime world, within the framework of the great explorations;

Criterion (vi): Like the Tower of Belem, the Convent of the Hieronymites of Lisbon, and Goa, Angra do Heroísmo is directly and tangibly associated with an event of a universal historic significance: the maritime exploration which permitted exchanges between the great civilizations of the Earth.

Within the boundaries of the 212,40 ha property are located all the elements necessary to express the Outstanding Universal Value of the Central Zone of the Town of Angra do Heroísmo in the Azores, including the sheltered site, the port, the defensive system of fortifications, the urban plan, the monumental religious architecture, and the characteristic vernacular architecture. Angra do Heroísmo lost its role as an international maritime crossroads two centuries ago. This has, in many ways, affected its subsequent development and expansion, enabling the city to preserve its plan and homogeneous group of buildings, civil and religious, flanked by two imposing fortresses that, in a more dynamic settlement, could have been lost. While there is currently no buffer zone, its establishment is proposed for an area of 223.85 ha. The property does not suffer unduly from adverse effects of development and/or neglect.

The Central Zone of the Town of Angra do Heroísmo in the Azores is largely authentic in terms of its location and setting, forms and designs, and materials and substances. It was substantially repaired and rebuilt following the violent earthquake in 1980 that significantly damaged the city. Angra’s city centre managed to preserve its 15th- and 16th-century road network, as well as its inventoried buildings. Use of traditional building materials and techniques is encouraged in rehabilitation projects, without prejudice to technological advances.

Identified threats and risks include development pressures and natural disasters. Development pressures threaten the town's built and functional equilibrium due to an increasing demographic density. The threat of natural disasters stems from the geological conditions and morphology of the town’s location, simultaneously volcanic and tectonic, in its geographic position on the Mid-Atlantic Ridge.

The Central Zone of the Town of Angra do Heroísmo in the Azores, which is largely under private ownership, is protected under Law No. 107/2001 of 8 September 2001, which establishes the legal basis and regime for the protection of cultural heritage. Angra do Heroísmo has also been given National Monument / Special Protection Zone status under Regional Legislative Decree No. 15/2004/A of 6 April 2004, which submits all planning instruments to the Detailed Plan for the Protection and Enhancement of Angra do Heroísmo, under the responsibility of the City of Angra do Heroísmo. Through this instrument, each building is under the direct supervision of the respective authorities concerning its preservation. It has also been given Regional Monument status under Regional Legislative Decree No. 29/2004/A of 24 August 2004. The process of drafting a detail plan for safeguarding the property is complete and an analysis of the technical reports suggests there is a need to provide more flexibility in its management. This will enable the Outstanding Universal Value to be maintained and enhanced, whilst also allowing contemporary features to be introduced in Angra’s architecture. Consequently, each generation will contribute with its legacy to the enhancement of Angra’s urban grid.

play_arrow Central Zone of the Town of Angra do Heroismo in the ... (UNESCO/NHK)