State of Conservation Central Zone of the Town ... 2000
Print

New information: The Secretariat received two reports from the Permanent Delegation of Portugal: (1) report of meeting on the marina project (13-14 January 2000, attended by the ICOMOS-designated expert), and (2) a Periodic Report on the State of Angra and its Sea Front (dated 10 April 2000).

The Periodic Report provides information on:

The reports have been transmitted to ICOMOS for review and advice.

The Bureau may wish to examine ICOMOS’s advice that will be presented at the time of its session and take the appropriate decision thereupon.

The Secretariat informed the Burea that it had received two reports from the Permanent Delegation of Portugal: (1) report of meeting on the marina project (13-14 January 2000, attended by the ICOMOS-designated expert), and (2) a Periodic Report on the State of Angra and its Sea Front (dated 10 April 2000).

The Periodic Report provided information on:

The ICOMOS expert, who had been involved for several years in the examination of this project, advised that the recommendations of the World Heritage Committee and the involvement of ICOMOS have given positive results.  These involved the formulation of a series of plans for urban preservation and the relation between the historical centre and the urban area, and the solution of the problem of the integration of the proposed marina. He had made some specific recommendations for further follow-up.

The Bureau commended the authorities of Portugal and the Regional Government of the Azores for the report and the actions it had taken in response to the recommendations formulated by the Committee, its Bureau and the ICOMOS expert. It encouraged the authorities to continue to involve the ICOMOS expert in the further planning process for the marina and the area that will connect the marina with the city, as well as in the preparation of the Special Protection Plan for the city of Angra do Heroismo.

The Bureau requested the authorities to submit a progress report on the above by 15 April 2001 for examination by the Bureau at its twenty-fifth session.

The Observer of Portugal highlighted the positive involvement of the World Heritage Centre and ICOMOS in this project and the good progress that was made over the past years. He expressed the wish of his Government to continue this collaboration in the future.  He reminded the members of the Bureau and the advisory bodies that the idea behind the construction of the marina was to give life to the area and thus give it the same character as in the 18th and 19th centuries.

The Delegate of Australia congratulated Portugal for the way it had made use of the system of periodic reporting. 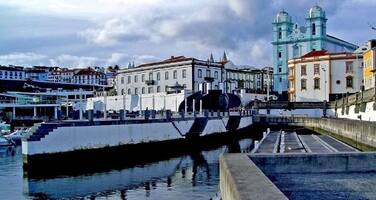