This iconic volcanic region covers an area of over 1,400,000 ha, nearly 14% of Iceland's territory. It numbers ten central volcanoes, eight of which are subglacial. Two of these are among the most active in Iceland. The interaction between volcanoes and the rifts that underlie the Vatnajökull ice cap takes many forms, the most spectacular of which is the jökulhlaup – a sudden flood caused by the breach of the margin of a glacier during an eruption. This recurrent phenomenon has led to the emergence of unique sandur plains, river systems and rapidly evolving canyons. Volcanic areas are home to endemic groundwater fauna that has survived the Ice Age. 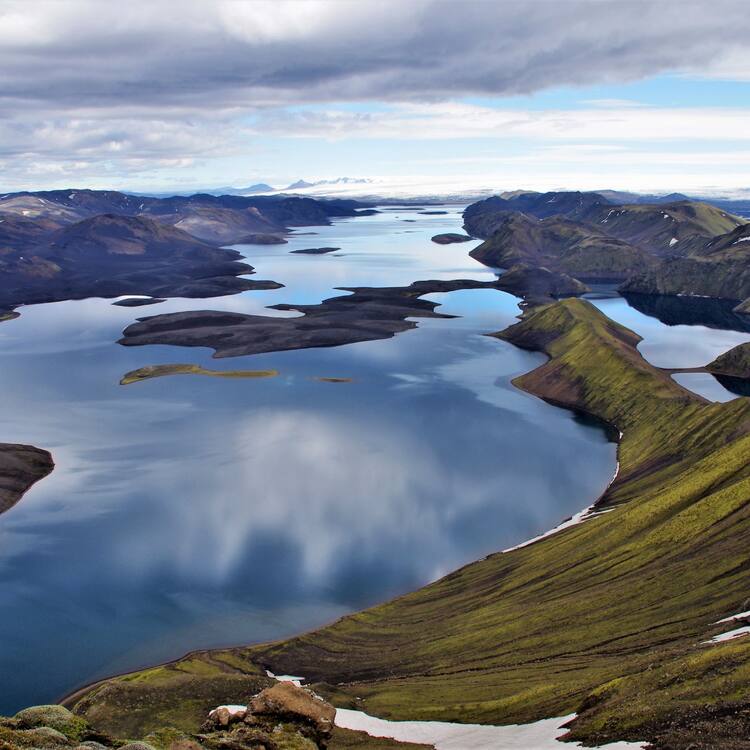 The property, totalling over 1,400,000 ha, comprises the whole of Vatnajökull National Park, plus two contiguous protected areas. At its heart lies the c.780,000 ha Vatnajökull ice cap in southeast Iceland.

Iceland includes the only part of the actively spreading Mid-Atlantic Ridge exposed above sea level, with the tectonic plates on either side moving apart by some 19 mm each year. This movement is accommodated in rift zones, two of which, the Eastern and Northern Volcanic Zones, pass through the property. Underneath their intersection is a mantle plume providing a generous source of magma. The property contains ten central volcanoes, eight of which are subglacial. Two of the latter are among the four most active in Iceland. Most of the property’s bedrock is basaltic, the oldest being erupted some 10 million years ago and the most recent in 2015. Outside of the ice cap, the terrain varies from extensive, flat lava flows to mountains, including tuyas and tindar (ridges) of brown hyaloclastites, erupted in fissure eruptions beneath ice age glaciers. The latter occur nowhere else in the world in such numbers.

The property comprises an entire system where magma and the lithosphere are incessantly interacting with the cryosphere, hydrosphere and atmosphere to create extremely dynamic and diverse geological processes and landforms that are currently underrepresented or not found on the World Heritage List. It was here that the phrase “Fire and Ice” was coined. The Vatnajökull ice cap reached its greatest extent by the end of the 18th century and has on average been retreating since then. Recently, its retreat has accelerated in response to global warming, making the property a prime locality for exploring the impacts of climate change on glaciers and the landforms left behind when they retreat. The volcanic zones of the property hold endemic groundwater fauna that has survived the ice age and single-celled organisms prosper in the inhospitable environment of subglacial lakes that may replicate conditions on early Earth and the icy satellites of Jupiter and Saturn.

Criterion (viii): The coexistence and ongoing interaction of an active oceanic rift on land, a mantle plume, the atmosphere and an ice cap, which has varied in size and extent over the past 2.8 million years, make the property unique in a global context. Earth system interactions are constantly building and reshaping the property, creating remarkably diverse landscapes and a wide variety of tectonic, volcanic and glaciovolcanic features. Especially interesting and unique in this regard are the basaltic lava shields (Iceland shields), volcanic fissures and cone rows, vast flood lavas, and features of ice dominant glacio-volcanism, such as tuyas and tindar. Interestingly, the well exposed volcanic features of the property have been used as analogues for similar features on the planet Mars. Geothermal heat and subglacial eruptions produce meltwater and jökulhlaups that maintain globally unique sandur plains, to the north and south of the Vatnajökull ice cap, as well as rapidly evolving canyons. In addition, the property contains a dynamic array of glacial- and geomorphological features, created by expanding or retreating glaciers responding to changes in climate. These features can be easily accessed and explored at the snouts of Vatnajökull’s many outlet glaciers and their forelands, especially in the southern lowlands, making the property a flagship glacial research location.

The property covers over 25% of the central highlands of Iceland and extends onto lowland areas to the south to cover a total of approximately 12% of the country. Most of the property corresponds to an IUCN Category II protected area. Its integrity is reflected in the inclusion of entire and intact landscape and geophysical units, minimal human use and intervention, and scientific interest in the property. The site contains the entire Vatnajökull ice cap, with all its subsidiary glaciers as they stood in 1998. It spans some 200 km of divergent plate boundary and encompasses ten central volcanoes and large parts of the accompanying fissure swarms and subsidiary landforms. The area is largely intact and remote from habituated areas with some 85% of the property classified as wilderness. An intense international scientific interest in the property is evidenced by at least 281 scientific peer reviewed papers, published over the last decade, on various aspects of plate tectonics, volcanism, glaciovolcanism, glaciology, glacial geomorphology and ecology. There has been no destructive human development within the property’s boundaries. A few historic farms exist, but today only a few park employees live there on a year-round basis.

The large majority of the property is protected by the Act on Vatnajökull National Park No. 60/2007 and Regulation No. 608/2008 (with subsequent amendments), whilst Herðubreiðarlindir and Lónsöræfi Nature Reserves are protected according to the Nature Conservation Act No. 47/1971. A range of other important national legislation is in place to ensure protection. Most of the land adjacent to the property is subject to the law on public land, where any invasive use requires approval by the Prime Minister’s Office.

The government agency Vatnajökull National Park (Vatnajökulsþjóðgarður) is the primary state agency responsible for implementing the park legislation, and is an effective organization, supported at all levels by the Icelandic government, local municipalities and businesses. There is mature governance in place together with experienced staff responsible for management employed on a long-term basis, including a strong complement of permanent and temporary staff.

There is a comprehensive Management Strategy and action plan in place, that have achieved a notably high level of local input to decision making, and which are subject to regular review and updating. Areas added to the national park since 2013 are progressively integrated into management arrangements. An effective long-term monitoring system is in place, using space- and ground-based observations, for improved evaluation of seismo-tectonic movements and volcanic hazards as well as for glacial flow and fluctuations and key aspects of the property’s biota.

The property has an adequate and secure budget to cover essential staff and operations, with the principal financial support from the central government and up to 30% which is generated from its own income. Significant other support has also come from the government controlled Tourist Site Protection Fund and the non-profit organisation Friends of Vatnajökull. There is a need to sustain and further increase resourcing to ensure the management needs of the property are fully met.

Risk management is a major issue in this highly dynamic setting where natural hazards are common. Other essential management issues include preventing wear and tear of nature at popular visitor destinations within the property, resolving visitor use conflicts, and addressing occasional illegal activities in the property when they arise. There is a need to develop and maintain adequate facilities for educating, managing and guiding the ever-increasing numbers of visitors, which were approaching one million in 2017, ensuring that any such provision is designed, assessed and implemented in a manner that ensures the protection of the property’s conservation significance. There is also a need to continue to work with local communities, organizations and businesses around the park to maintain their involvement and help them benefit from the park.